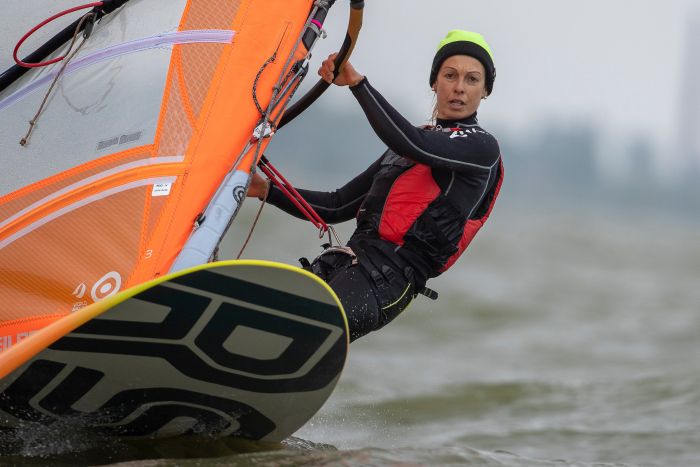 Medemblik, The Netherlands – The first day of racing is done at the Medemblik Regatta Nautical Festival. Almost all classes raced according to schedule, only the Hansa Class had to stay inside due to, too heavy winds. For the RS:X surfers racing went smooth and fast.

After the official opening of the Medemblik Regatta Nautical Festival on Monday night at the Regatta Center, the event kicked off this morning at 9.00 hour in the city center. Alderman of Sports, Jozet Fit, was present at the Optimist on Tour, here 160 children learned to sail.

While those children stepped in the boat for the first time, the top sailors were preparing at the Regatta Center for the first day. Giorgia Speciale (ITA) from the RS:X Women is excited about this week: “I'm here to gain some more experience and I'm hoping for lighter winds since I'm pretty small.” She doesn't get those light winds she hoped for on the first day. But this means there's enough wind for all 3 scheduled races.

Younger guys working hard to get in the front

The Dutch Kiran Badloe and Dorian van Rijsselberghe are in first and second place with equal points. Badloe wins the last race of the day and is placed first in the overall score: “It was fun today, a bit windy but I enjoyed it. We had a good battle on the water.” The battle was mostly between him and his training partner. Altough they both admit the fleet is pretty strong. Van Rijsselberghe: “It was a great day, there are a lot of good guys in our fleet this week. The younger guys are doing good as well, normally in the bigger fleet, they don't get to the front that easily. It's cool to see all the younger guys battle it out.”

Sil Hoekstra (NED) is one of those younger guys, before racing he says he's not really going for the results this week. “But in the end you're racing at an event where you want to race as good as possible.” After the first day, we find him fourth overall. The Israeli Tom Reuveny is in third place.

French youth in front
The French guys are in the lead after the first day of racing in the RS:X youth. Yun Pouliquen has a steady day in the front, battling it out with Fabien Pianazza. “It was a good day, great conditions and nice battles with my teammate Fabien.” Pianazza is second overall, only two points behind Pouliquen. Mathis Ghio, French as well, is in third place. Pouliquen has a clear goal this week: “Maintaining my leading position.”

The Italian Flavia Tartaglini leads the RS:X Women fleet after the first day of racing. “Medemblik is one of my favourite places to race. I haven't been here the last few years, so very happy to be back again. Today went very well, conditions are good and I'm looking forward to the next days of racing.”

Dutch Lilian de Geus is in second place, she tells us she kind of hopes to win this week. “You try your best at every regatta, but I've never won this one yet. Last year I came in second, how great is it to win at the regatta in your own country.”

The talents in the 49er and 49erFX are getting used to the conditions on the first day with heavy winds. The Korean team ith Bongjin Chae and Dongwood Kim, is the strongest in the 49er. Dutch Femke van den Berg and Elise de Ruyter are leading the 49erFX fleet after the first day.

The Hansa Class didn't go out today due to the strong winds. The predictions for Wednesday are lighter, then they will start their regatta at 12.00 hour.

Results
Check all the results on the website Medemblikregatta.org.