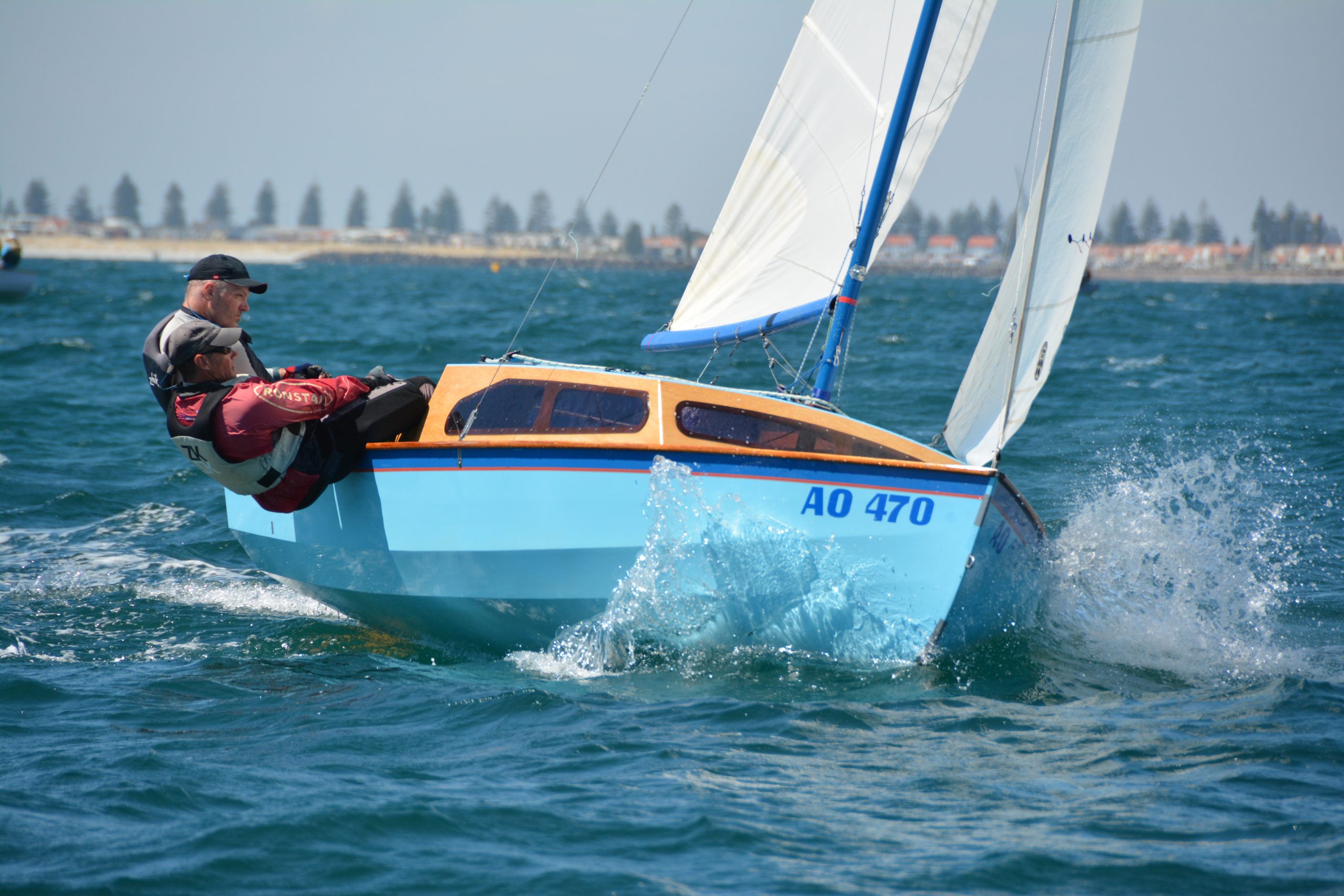 The Largs Bay Sailing Club was the host for the 51st Hartley TS16 Australian Championship held between the 28th December 2015 and the 6th January 2016. Largs Bay Sailing Club, situated towards the northern end of the Adelaide metropolitan coast is a regular host of this event in South Australia due to the great facilities and on-water professionalism of the club. Six boats made the journey  from interstate, one from as far away as Townsville and the remaining seven were local South Australian crews.

Measuring, safety checks and weigh in of the fleet was dispatched quickly by the local team and only a couple of boats need some additional lead to ensure the minimum weight.

The invitation race started in a building south westerly with the race being won by a local husband and wife crew of Geoff Potts and Christine Haydon in ‘Kurdi 2’ followed closely by the Williamstown crew of Michael Horvath and Ian Fox in ‘Tru Blu’ and seasoned NSW campaigners Eric Partland and Gary Wills in ‘Uncle Roy’.

The breeze decided to play hide and seek for the first points race of the championship, leaving the competitors to take in the view from the very comfortable balcony at the Largs Bay Sailing Club and the race was postponed for resail in the new-year. The following day, New Year’s Eve had race number two scheduled. By 2pm, the temperature had climbed above 35 degrees and the Principal Race Officer, Grant Baker, got the fleet away in a teasing 5 knot westerly; however the breeze fizzed before the fleet reached the weather mark and race two was abandoned and set for resail until the new year.

Following a great New Year’s celebration watching the fireworks at Largs, 26 anxious sailors turned up on the 2nd January eager to get some racing underway. The conditions made up for lost time and some promising breezes were forecast for the next few days. Two races were sailed that day, the first in about 18 knots and the second in a building 20 knot plus conditions. The Williamstown boys aboard ‘Tru Blu’ enjoyed the conditions on offer and took out both races while with  Geoff Potts in ‘Kurdi 2’, Kym Tuck in ‘Tarrango’, Eric Partland in ‘Uncle Roy’, Trevor Bell in ‘Vinca’, Greg Russell in ‘Black and Blew’ shared in the minor placings in each race.

Two races were held the following day with a carbon copy set of conditions. The morning race saw ‘Tru Blu’ notch up her third win for the series, followed by Largs Bay locals Andrew Doyle and Roy Adams in ‘Merlot’ and Kym Tuck and Glyn Hughes in ‘Tarrango’. The afternoon race did not bode well for ‘Tru Blu’ breaking a jib halyard while leading on lap 2 in the heavy conditions and she retired from the race. The result was a Largs Bay trifecta with ‘Tarrango’ taking the bullet from ‘Merlot’ and Greg Russell and Phil McDonald in ‘Black and Blew’.

Race five was held in slightly more moderate conditions the following day and saw ‘Tru Blu’, after some repairs the previous day, return to her winning form. Eric Partland in ‘Uncle Roy’ was second and Geoff Potts in ‘Kurdi 2’ third. The series was shaping up as ‘Tru Blu’s’ to lose as it entered the final two races, but with a DNF already on the score sheet and only one discard, the Williamstown boys needed to finish the final two races with good results.

Race 6 started in a building sea breeze around 12 -15 knots and the run of form continued for Horvath and Fox aboard ‘Tru Blu’, establishing a good lead and not getting caught up in the dog fight amongst the 4 boats behind vying for a podium in both the race and the title. Andrew Doyle aboard ‘Merlot’ and Trevor Bell aboard ‘Vinca’ were locked in battle for second place and 100m from the finish had a classic port-starboard/lee bow tussle. ‘Vinca’ tightened up a little too much looking for some height and unfortunately suffered rigging failure was forced to retire! That battle was enough to hold ‘Merlot’ up and ‘Kurdi 2’ seized the opportunity to claim second place across the line by a boat length from ‘Merlot’ third and two boat lengths back, Tuck in ‘Tarrango’.

A place in the top 10 of the final race would be enough to secure the championship for ‘Tru Blu’ and a top 4 finish for ‘Tarrango’ would secure second overall. Largs Bay locals Geoff Potts, ‘Kurdi 2’ and Andrew Doyle, ‘Merlot’ were locked together on 18 points for third overall with ‘Kurdi 2’ getting the nod on countback at that stage. The forecast was for 22-27 knots from the south-west at race time. Some wise heads had already decided it was too much and were packing their boats for the trip home. As the race time approached, there were a few nervous sailors on the beach and the breeze steadily edged towards the forecast range. With crews ready to leave the beach to fight it out the breeze was hovering around 25 knots and the Principal Race Officer made the sensible call to postpone and subsequently abandon the race. The breeze continued to build to 27-30 knots with a heavy sea state for the remainder of the day.