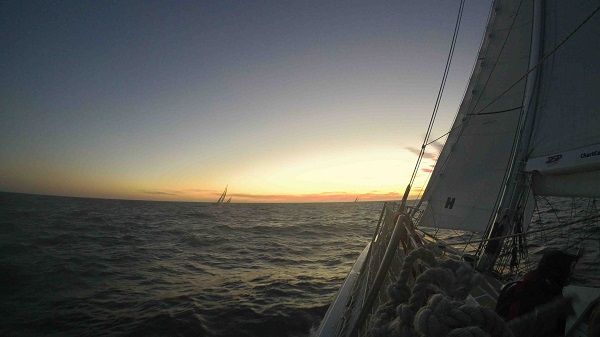 It has been a very close third day of racing in Race 4: The Clipper Telemed+ Tasman Test with just 38 nautical miles separating first and tenth position. Day 3 has also brought about much change throughout the leaderboard as teams now begin to gear up for the fourth Elliot Brown Ocean Sprint.

Garmin has taken the lead which has previously been held by Sanya Serenity Coast, now in fifth place, since leaving Fremantle and there is fighting talk from Garmin Skipper Gaëtan Thomas. Speaking from on board this morning, he said: “We will do our best to stay in the lead, our canons are ready. Sydney, we are coming!”

Visit Seattle now takes second place, jumping five positions on the leaderboard overnight with Unicef following closely in third, up from eighth place. Despite its fall from first to fifth, Unicef plans to keep a close eye on Sanya Serenity Coast over the coming days. Skipper Bob Beggs explains: “After passing through Virtual Waypoint Mitchell, tactical decisions will be critical to success. Wendo on Sanya Serenity Coast is the real expert in this part of the world and watching her closely is a good move.”

Fourth place goes to Qingdao which has taken a huge step up from eleventh place yesterday thanks to an early tack that paid off, but it is a different story for HotelPlanner.com which has fallen into sixth place from third. However, as Qingdao Skipper Chris Kobusch explains, the race is still extremely close. He said: “Visit Seattle, Garmin and Unicef tacked shortly after us and are still six nautical miles ahead. GREAT Britain was right behind us all night, but just disappeared from the AIS (Automatic Identification System). Since race start this has been a very close race.”

Racing towards the back of the fleet is similarly tight with Liverpool 2018 in seventh place and GREAT Britain, Nasdaq and Dare To Lead following in eighth, ninth and tenth. Nasdaq Skipper Rob Graham observes: “Racing continues to be close – we currently have Dare To Lead, HotelPlanner.com and Liverpool 2018 visible on AIS, and know that the rest of the fleet are not far away either. With so many boats in the same weather and on the same course, only helming and trimming can make the difference between positions, and we're working hard on both.”

Daring to take a different more southerly route from the rest of the pack is eleventh placed PSP Logistics and although this has resulted in sacrificing leaderboard positions, it is a tactical move that Skipper Matt Mitchell hopes will pay off in the coming days. Matt explains: “We always knew that there would be some initial sacrifice by taking a more southerly route and I for one hate being at the back of the fleet. It only makes it slightly better that we were expecting to be, however the cogs do start whirring thinking if we have done the right thing or not. Only time will tell! Looking forward to the next few days where we will see if our strategy has paid off.”

Looking ahead, the Elliot Brown Ocean Sprint will prove to be the next big challenge, although with such close racing some of the fleet is feeling like it is in ‘sprint mode’ already. Weather-wise, Clipper Race Meteorologist, Simon Rowell, comments: “Satellite images show a band of frontal cloud coming through, but it doesn’t look too strong so I expect the fleet will see 40 knots at the top end.

“PSP Logistics might get a bit more as it has taken the southerly route. After this goes through, it should be a couple of days of quite strong south westerly winds down towards Tasmania.”

Stay tuned to the Clipper Race Viewer, with its hourly position updates, to see how the changing weather conditions will affect the fleet ahead of the Elliot Brown Ocean Sprint!