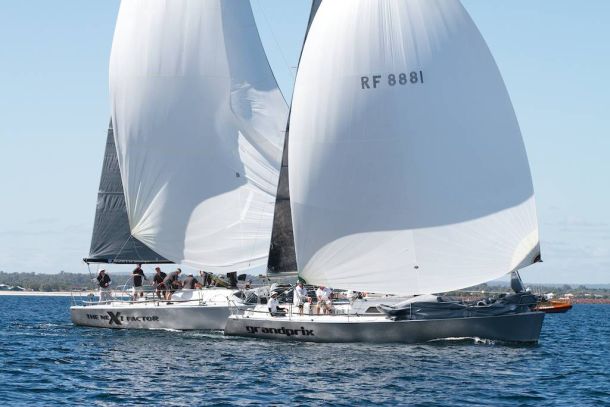 Grand Prix slides out under The Next Factor

Leaving the best until last, Dave Walling and his crew sailed a blinder this morning, coping with extremely light and variable conditions at the start better than anyone. By the time the breeze switched to the south and freshened, The Next Factor had established a solid position in the fleet, mixing it with Black Betty and not far behind the TP52, Calm. They finished fourth over the line, just two minutes behind the GP42 Dirty Deeds, to record their fourth win of the 11-race series.

Although Calm once again took line honours, the margin was nowhere near what it needed to be and she recorded an eighth place for the second time in the regatta. Last year’s winner Black Betty also sailed a very consistent series but when final scores were tallied, The Next Factor was declared the winner of the IRC Division 1 fleet with 18 points, edging out Calm (21) and Black Betty (23). Most agreed that it was IRC racing at its best, and the suggestion to hold a State IRC championship at Geographe Bay was gaining some momentum.

Division 2’s IRC handicap, which was painfully close prior to the final race, was won by Tony Carter’s Just Cruisin’, which gave the yacht a three point buffer over second placed Lithium, sailed by Graeme Monkhouse. A major upset in the Performance Handicap for Division 2 occurred when a second place by Ken Waller’s Let’s Dance elevated the yacht from 5th place on the leader board to outright winner, beating Denys Pearce’s Foundation 36 By & Large on a countback after both finished the series with 21 points. Jamie Weeden’s Bull 9000 Wild Bull finally reaped the reward of their hard week when they won today’s race.

Peter Sim’s Fidra has been one of the front runners in division three from the start of the week and her third placing today was good enough to win Division 3 with a score of 13 points, ahead of Jim Merton’s Cole 32 Omega on 15 points and Rod Turner’s Nexus. Omega’s win in today’s race lifted her from 6th on the leader board to second place.

Dorade was virtually untouchable in the Jib & Main division. Even Janet Hornbuckle’s first placing today in Fortuosity was not enough to displace the big Sense 50’s stronghold on the points table. The final score for Dorade was 6 points. Fortuosity was next on 9 points and French Kiss finished third on 12.

The consensus is that this was the best regatta for some years. Confusion about whether or not the event would run this year may have been partially responsible for the lower than normal entry list, but the 54 competitors who sailed were almost unanimous in their approval of the format.

Royal Perth Yacht Club was solely responsible for the on-water program, setting up the notice of race, sailing instructions and organising committee. Mooring and entertainment ashore was left to the Port Geographe Marina, which did a great job in organising entertainment within the marina precinct, including a ladies’ luncheon and fashion parade. Fashions by the unique and very talented Sally Young from Bridgetown were a real highlight of the parade. WA Food Ambassador Don Hancey was on hand with a cooking demonstration. This man’s passion for West Australian produce is infectious and the morsels he cooked in his demonstration, using his trademark giant frypan, was nothing short of sensational.

When word filters back to the metropolitan skippers who decided to stay at home this year (and it surely will) most will decide that Busselton in February is a great place to be.

And they’d be right!