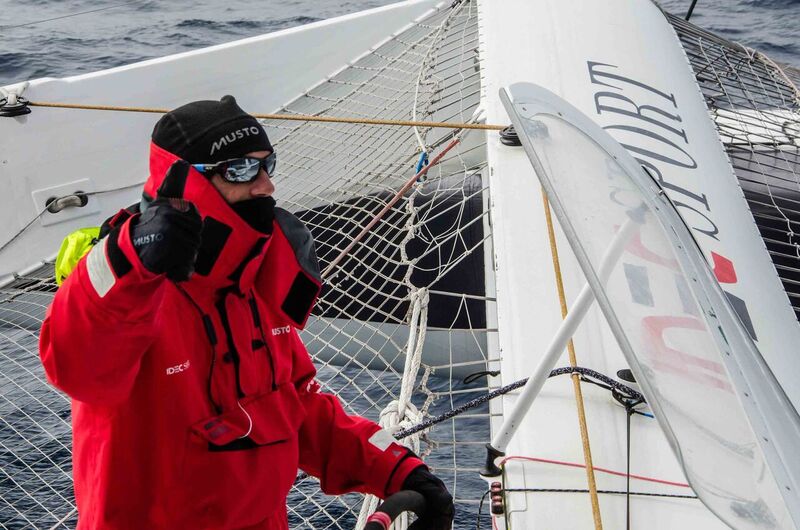 On board IDEC SPORT.

DEC SPORT has regained 200 miles in 24 hours. The Furious Fifties are pushing the big red trimaran at high speed across the Indian Ocean. But they need to watch out for icebergs. Yesterday, Francis Joyon’s crew came within a mile of one of these ice monsters, as big as a cargo ship…

They are now enjoying the Southern Ocean. “Yesterday we were engulfed in the mist and came to within a mile of an iceberg, which cooled down our excitement.” Cooled down may not be the ideal word to use here, as the temperature is already icy enough at 52 degrees south in the heart of the Indian Ocean.

Francis Joyon, Bernard Stamm, Alex Pella, Clément Surtel, Gwénolé Gahinet and Boris Herrmann experienced the scary appearance of ice late yesterday afternoon. “We couldn’t see anything beyond 30 metres or so (a boat length – editor’s note )” explained Francis Joyon. “We spotted it on the radar, but we couldn’t see anything through the mist even with binoculars. We passed within a mile of this huge iceberg without seeing it. According to the size on the radar, it was about 150m long or the length of a cargo vessel…”

Once they had got over this scare, the good news was the arrival of stronger downwind conditions. During the night, they moved to a course forty miles or so south, and this paid off. When they tacked back to the east after this short dive, IDEC SPORT was back at speeds above 30 knots.

“I’m looking at the wind instruments and we have 30-31 knots of real wind gusting to 37-38 at times. As a consequence the boat is sailing nicely and we’re constantly above thirty knots with peaks in excess of 35. We’re pleased. We knew that by diving south we would find a little more wind. We’re already a long way down, but our route across the Indian takes us a long way south. We may well go down to 54 degrees south.”

You read that right. 54 degrees south is a long way down. The Furious Fifties require them to keep a permanent watch. “We change over every half hour at the helm now,” added Francis. The six men on IDEC SPORT are fighting to keep their hands and faces from freezing. “Fortunately inside the boat, we have a little heater, which allows us to dry our clothes and give us a few extra degrees. It’s 11 degrees inside at the moment.”

In a video sent back this lunchtime,  we can see Bernard Stamm, with his helmet, and gloves on, all wrapped up in his watch jacket as he steers the big red trimaran: “We’re doing 39 knots and lining up with the wind behind us. We have to be careful as potentially, there is ice ahead of us.” In these southern latitudes, IDEC SPORT is speeding towards the Kerguelens. This is a wet, icy, hostile environment… but at least they are clocking up the miles more quickly again now.

As proof of that, IDEC SPORT has regained almost 200 miles from the record pace in the past 24 hours. The difference has gone from 800 miles at the same time yesterday too 600 this afternoon. A quarter of their losses regained in just 24 hours!

We can see now why the crew wasn’t going crazy and why the atmosphere remains upbeat on board the boat. At these high speeds, everything can change very quickly and IDEC SPORT is expected to cover more than 700 miles today.

“That really cheers us all up,” admitted Francis Joyon, before explaining that the next key moment would be dealing with the tropical Low forming to the south of Madagascar. As always, they have to plan ahead. “I think we will have to come to a decision some time tomorrow evening,” said the skipper of IDEC SPORT sailing full steam ahead. At high speeds in the icy climes of the Indian Ocean, which is finally being cooperative.