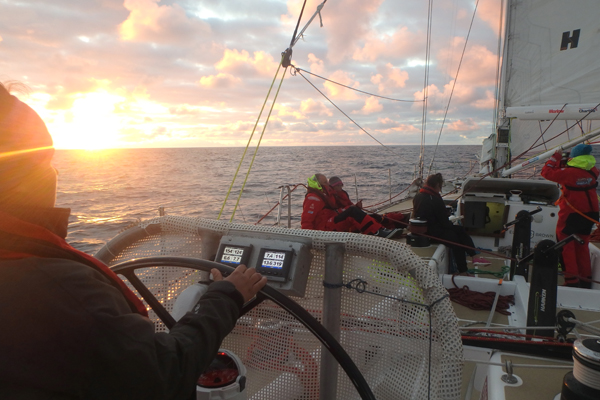 The lead has shifted once again in the PSP Logistics Panama Cup with ClipperTelemed+ now in pole position followed by IchorCoal and Unicef. However, as the frontrunners approach the ITCZ (Inter Tropical Convergence Zone) they have started to slow in light airs which threaten to halt progress. While they start to sweat, those behind continue to enjoy stronger winds which they’re hoping will allow them to catch the leaders.

Otherwise known as the Doldrums, the ITCZ is a band that runs along the Equator where the north-east and south-east Trade Winds come together. This makes the wind patterns ever changeable and difficult to predict. As a result the Clipper Race Meteorologist Simon Rowell has advised the fleet that the best way to judge what weather is on its way is to go the traditional route and use the on board barometers rather than relying on the GRIB files which become quickly out of date.

In his forecast to the Skippers today, Simon states: “Looks like the light stuff is taking over. The low to the south is starting to move west, and ahead of you lies the wind driven off the ridge of high pressure going in to the rather dubious low over the mainland. It’s going to get rather tricky now.

“Over the next few days that ridge does seem to approach the mainland a little more than usual, giving quite a narrow band of forecast winds. As you well know by now the GRIB files are not that great in these conditions, so I’d recommend watching your barometers even more closely than usual to try and see where you are in relation to that ridge. They’ll be useful for seeing any gradual changes,” he added.

After sailing in close proximity to Unicef yesterday, ClipperTelemed+ Skipper Matt Mitchell reports that the pair have parted company as they take different approaches to the ITCZ.

“It's been another day of steady progress. Earlier on we cast off the tow-rope, feeling that Unicef were ready to go unsupervised for a while and made a bit of easterly progress until the wind shifted more westerly, meaning that the southerly gybe was much more preferable.

“The miles are slowly ticking away and although progress hasn't been quite as fast as we'd have liked, we are at least still moving. The heat has been really noticeable today and even now in the middle of the night shorts and t shirt are perfectly adequate for being on deck. It looks like we have a fair bit of light airs forecast so it will take care and attention to keep the boat moving,” he concluded.

Unicef Skipper Martin Clough sent a message to his counterpart in his daily report today before adding that concentration levels are high on board: “It seems the tow-rope to ClipperTelemed+ broke today. Best of luck guys- hope you don't get lost. Missing you already.

“It has been testing helming conditions this evening with light airs. The cockpit is a little quiet this evening as the guys focus on keeping the spinnaker aloft and filled.”

For the first time in days, all twelve boats are visible on the Race Viewer as none of the teams are in Stealth Mode. Garmin, which has moved up to fourth place given its proximity to the rhumb line, is still the closest inshore, and Skipper Ash Skett says they’ve been enjoying good speeds which has helped claw back a few miles.

“As far as sailing goes, it's been an awesome day of great progress and fantastic sightseeing as we rounded the southern tip of the Baja California peninsula, coming within 5nM of the coastline at one point. As happened in the East China Sea, once again we found ourselves sailing through a fishing fleet. However this time instead of Chinese trawlers, the fleet constituted of small game fishing boats, no doubt for hire to tourists in the resort nearby.

“The mountain range explained the huge wind hole behind it on the weather files, so we are now heading slightly further out in an attempt to skirt around it. So far so good, and it looks like we are closing the gap slightly on those ahead as we pass the halfway point in this race.”

As the teams continue to race each other to the Panama Canal, one man on board Garmin for the Pacific Ocean crossing is racing all of them to New York on his bike. Simon Parker, an adventure travel journalist, is hoping to be there to meet the fleet at Liberty Landing Marina for the arrival window on 12 – 14 June. Unlike some of our teams, Simon writes about his delight to have tail winds the last day, which have helped speed up his progress as he continues to cross South Dakota. After a allowing himself the luxury of a day off, an alien concept to the Clipper Race crew, Simon has posted in his daily blog on facebook:

Day 19, USA: Today was the day I had been looking for. A brisk west to east wind helped push me through South Dakota at a rapid speed, as I kept my legs turning at a rhythmic cadence that made the bike purr and whizz. Yesterday’s rest meant that my legs were fresh and eager for action – and between the hours of 0600 and 1500 I racked up 101 miles, stopping for a mere 15 minutes for bathroom and photo breaks. My approach to long-distance cycling has always been about remainingon the bike. Breaks any longer than five minutes quickly allow my body to cool down – and while occasionally I need to shake out some cramp or throw on sunscreen, I’d much rather get the miles done and relax in the evenings. Tonight I’m camping in the small town of Mobridge on the banks of the Missouri River, sipping some cold beers and enjoying the sunset. Today’s early start and finish mean that I can get everything organized for tomorrow; batteries charged, clothes aired, water bottles filled, food prepared. I like having as much done as possible, so that I can simply crawl out of my tent, lash everything onto the trailer and get on the road. Tomorrow I’m heading for the town of Aberdeen – another 105 miles away at the end of another long and straight highway. Fingers crossed for more delicious tail winds.

Simon has written about his Clipper Race experience for the Daily Telegraph (which we have shared on facebook) and is making a radio documentary for the BBC about his entire challenge, which includes joining the Unicef team in New York to race across the Atlantic in the Homecoming Leg before getting back on the bike for the final stage.

So with 32 days to go until the estimated arrival window into New York opens, this is another race to track along with the hourly updates on the Race Viewer in the PSP Logistics Panama Cup.