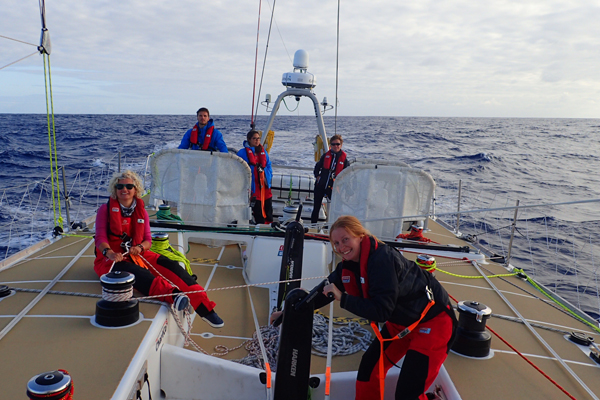 Once again, bonus points are up for grabs as the Clipper Race fleet approaches the Ocean Sprint start line at 17 and a half degrees north. Two points are on offer for the fastest team through the 90 nautical mile course, and while race position is irrelevant in terms of which team will win, the timing could be key as conditions are constantly changing around the Inter Tropical Convergence Zone (ITCZ).

At 0900 UTC, we had a ‘first’ of this entire circumnavigation with the front two boats Unicef and ClipperTelemed+ polling the exact same Distance To Finish on the Race Viewer, 1698.91 nautical miles.

IchorCoal sits in third, 30 NM back, with LMAX Exchange and Derry~Londonderry~Doire also in close company as they approach the sprint start less than 14 NM ahead.

“This morning, due to a bad positioning of a wind shift, we lost miles as Derry~Londonderry~Doire gybed on port tack. The lateral gap between us was then too big, with a risk of losing control on them. We then had to work on reducing this gap and keeping the lead – an interesting exercise of taking some short windshift to come back. That means we had to do about 10 gybes,” reports LMAX Exchange Skipper Olivier Cardin.

“As I'm writing we have the control back. Always good racing with the Northern Irish gang, they are like the soap in the bath. Concentration on board is at the maximum. I really feel the ambiance of a professional racing crew, always looking after the performance.” High praise from the Skipper who has raced professionally with some of France’s premier sailors.

Daniel Smith, Skipper of Derry~Londonderry~Doire agrees that the motivation of having another boat in such close quarters keeps everyone focused on racing, even with, or especially because of the lighter winds and potential for wind holes ahead.

“We hope that the path we have chosen will take us towards our waypoint without us coming to a standstill but with light wind forecast and wind speed currently less than 6 knots, it is going to take all our concentration to stay on course and keep the boat moving. We just hope that despite having light winds we have managed to pick a better route through them than the other Clipper 70s.

After battling out west for much of the last week, Visit Seattle and Da Nang – Viet Nam are making course south-east where they will hope to be reunited with the rest of the fleet. Although Visit Seattle Skipper Huw Fernie admits to being disappointed with their progress.

“It is now a closed case as to whether coming out so far west was a good choice; the body of the fleet now lies between us and the finish line and there is nothing to do but chase, something we are good at. Had our progress gone as forecast then we would have re-joined the fleet in almost the exact position that we left them, but a stroke of bad luck saw us stand in a wind hole for a day and that is the distance we must now make up.

“With many more wind holes ahead there is always hope, the challenge now is to make sure we stay in good shape and within striking distance over the next few days. As it happens we are for now sitting in a patch of ocean where the current is also slowing us, perhaps a new day will bring new fortune,” Huw added.

Given the unpredictability of the wind patterns in the Doldrums and the effect they can have on the length of time it takes to reach the finish line, the Race Office outlined a strategy to all the Skippers and crew before the start of the PSP Logistics Panama Cup in Seattle. As it is important that all the teams pass through the canal by a certain point, several potential finish points have been identified.

Race Director Justin Taylor explains: “The final stages of this race down the coast of the Americas have historically been characterised by light winds. The resulting reduction in boat speed can jeopardise the Panama Canal transit which needs to be organised quite some time before the fleet arrives there. For this reason we include a series of gates that the fleet must pass through. Therefore, if the race is shortened due to a lack of wind, each of these successive gates would actually become the finish line.

“Of course this has a tactical effect to the routing decisions made by the Skipper and crew. The actual position of the gates are not shown on the Race Viewer so as not to confuse things. If a decision is made to employ one of these gates as a finish line it will be added to the Race Viewer at that point. We feel this is a much better method of determining final race positions than just measuring the distance of a yacht to the finish line in Panama. Although obviously we are hoping that all the yachts will carry enough breeze to get them all the way,” he concluded.

For now, all the teams are on the move and with some due to start the PSP Logistics Panama Cup Ocean Sprint within a couple of hours, stay tuned to the Race Viewer to track their progress.