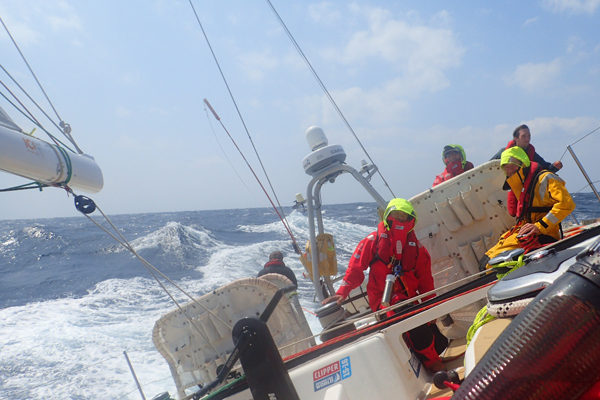 Unicef is the new race leader today having faced some very tricky conditions in the night following a new small low pressure system formed further south than forecast and left the teams with headwinds and a “diabolical” sea state.

The unforecast, unpredictable conditions saw the wind rapidly increase greatly to 40 knots, and change direction, creating a north south divide in the fleet.

Ash Skett, the Skipper of Garmin, the former race leader, said it was the toughest night of the entire circumnavigation so far, as his team was forced to head in the opposite direction to Seattle in order to find the favourable westerlies in the southern sector of the system.

Garmin is now in second, 2.4 nautical miles behind, ClipperTelemed+ up in third 9.47 nM behind; and the majority of the rest of the fleet is tightly bunched together.

Ash Skett continued: “Disaster yesterday as the new small low pressure system formed further south than forecast and left is with headwinds and a diabolical sea state. This made last night the toughest of this race so far, forcing us to deal with massive wind shifts and huge variations in strength. It also led to me making the really difficult decision to head in the opposite direction to Seattle.

“Thankfully though it paid off and we have now found ourselves in following winds and heading the right way again. The next few days are going to be very tricky due weather conditions that are hard to predict. There's currently a massive storm out in the middle of the Pacific which has created a wasteland in its wake. This is what we are battling through now and is the primary cause of tiredness among our bunch thanks to a multitude of sail changes,” Ash added.

The weather was not as forecast over the last 24 hours because the low pressure system was small and unstable and didn’t show up well on the GRIB weather files, Simon Rowell, the Clipper Race’s Meteorologist explained today.

“As we were going straight towards a little low, the wind began to be totally erratic in direction and in force. As Garmin hit that yesterday evening we were at the beginning stuck without wind.

“We were trying to manage in the dark to find the best course with the best speed. In the middle of the night, squalls came with about 40 knots inside. First, downwind, we were happy to make good speed directly in the route. Then it turned easterly with the same strength. We then made our course, close hauled, on starboard tack at about 20 degrees from the route. Quite good, but we were forced to go more northerly… It was not my choice to leave the right side of the course…

“So we continued like that, tacking was not a choice with a course coming back home. After being the most southern yacht of the fleet, we are now the most northerly. There's some advantages to being here, and some inconvenience. But to be fair, with the weather forecast over the next days, I don't really know where to go…” Olivier added.