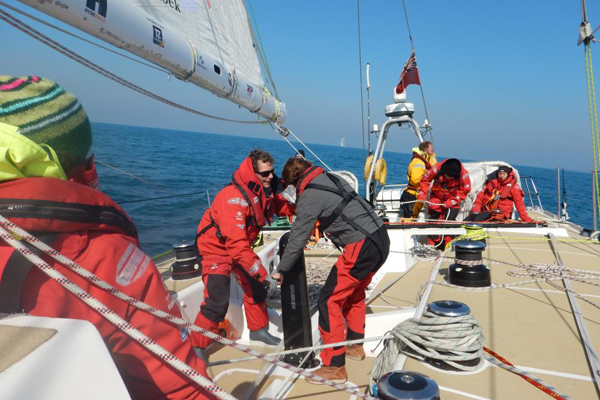 The wind has been inconsistent and shifty, with a lot of trimming and sail changes taking place on day 6 of the Seattle Pacific Challenge.

With the speed varying between 6 and 15 knots and shifting 40 degrees, many teams have also found themselves stuck in wind holes thanks to the new high pressure system, and unable to get any further north on the Great Circle route of the North Pacific due to the unfavourable winds.

Since this morning local time, the wind has become steadier and slightly stronger at around 12 knots.

Garmin continues to lead the fleet, some 15 nautical miles ahead of LMAX Exchange in second, with Mission Performance now in third after more leaderboard changes.

Greg Miller, Skipper of Mission Performance, said: “Having fought our way north for the last 24 hours we sailed right into the wind hole and bobbed around for a few hours, eking out little mileage from the windseeker, with the Mission Performance Warriors working really hard in sloppy seas and little wind. As the wind filled in they were possessed in their enthusiasm to get the boat going quickly, it probably had something to do with us being in very close proximity to Derry~Londonderry~Doire and Da Nang – Viet Nam! Well done Warriors, I am proud of you all, keep it up!”

Huw Fernie, Skipper of Visit Seattle, in eleventh position and racing to its home port, said yesterday’s calm patch caught the team out.

“Even though we tried to go south and skirt the edge of the light winds area (just like LMAX Exchange managed to) we ended up too far north and stuck for the night. The winds returned at dawn after probably the most restful night of the race and with it we are moving again, ticking off the miles on our long journey across the Pacific.

“There are two light patches that are brewing so we'll see who hits them and who escapes; this could be a deciding moment for the race,” Huw added.

Who will best weather the conditions? When will the yachts be able to start heading north again on the Great Circle route?

Finally, all in the Clipper Race family will be sad to hear of the death of Ed Dubois, the internationally renowned yacht designer. He designed the very successful Clipper 68’s and all those who sailed in the 68’s know how seaworthy the boats were and are. We extend our sympathies to his family and his team at Ed Dubois Design.

*All positions correct as of 1000UTC.