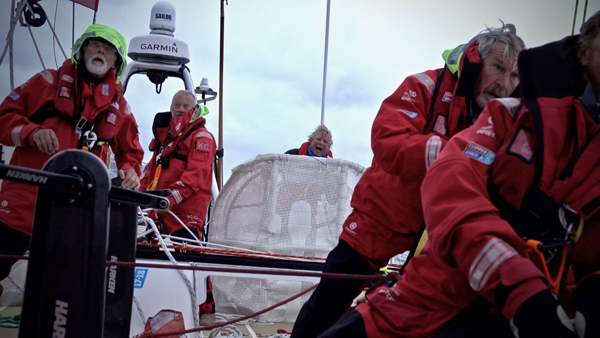 Following an intense day of racing on the sixth day of Race 4, the ClipperTelemed+ Tasman Test, it can be revealed that an incredible 13 seconds separated the top two teams, and just three minutes 16 seconds separated top three teams, in what has certainly been the closest and most thrilling Elliot Brown Ocean Sprint battle of the 2017-18 edition.

Claiming second place in the Elliot Brown Ocean Sprint for the second consecutive race, skipper Nikki Henderson reported: “The crew worked super hard to keep the boat moving. I was particularly impressed by a fantastic gybe just at the end.”

Qingdao completed the sprint in the third fastest time of the fleet and will claim one bonus race point.

Unicef is currently in fourth place, followed by Garmin in fifth and HotelPlanner.com which is maintaining sixth place, just three nautical miles behind.

HotelPlanner.com skipper Conall Morrison commented: “A grey sky and lots of wind is helping us to fly along towards the bottom of Tasmania, and it seems Garmin is experiencing the same as we see them on the AIS (Automatic Identification System).”

Seventh place is maintained by GREAT Britain today, with Liverpool 2018 in eighth after completing the Elliot Brown Ocean Sprint overnight. However, as Liverpool 2018 skipper Lance Shepherd observes, racing remains just as competitive: “With the Elliot Brown Ocean Sprint now finished, we are back to good old fashioned regular sailing which to be honest is not much different from ocean sprinting.”

Although Dare To Lead didn’t have the quick Elliot Brown Ocean Sprint it was hoping for, racing remains fast on board the ninth placed team, with skipper Dayle Smyth reporting: “I took a stint at the helm this morning and hit 24.7 knots, the record of the day, and we continue to have nice big surfs.”

Towards the back of the fleet, PSP Logistics is still fighting to regain positions following its bold decision to take the most southerly route of the fleet earlier in the race with Nasdaq following in eleventh. PSP Logistics skipper Matt Mitchell explains: “We are currently setting ourselves up for the next south of west wind shift which I hope that we can hold all the way down to the virtual beach.”

Looking ahead, teams are now setting their sights fully on Tasmania, the next race waypoint, and are currently in the strongest part of the front which should ease over the next 24 hours.

Clipper Race Meteorologist Simon Rowell explains: “By this time tomorrow the wind should have backed and then veered a little again ahead of the next front coming in. This should give the fleet a strong push south of Tasmania.”