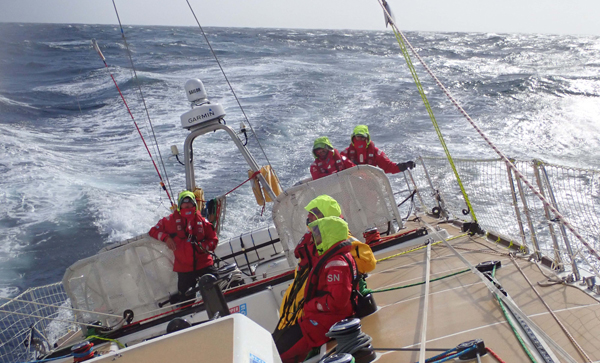 Reefs are shaken out as conditions subside

Following fast and furious conditions over the last 24 hours, which served up dramatic downpours and wind speeds gusting 60 knots, the Clipper Race fleet is busy shaking out the reefs in order to make the most of more settled conditions.

Ahead of the front, which passed over the majority of the pack yesterday evening, teams were making the most of the exhilarating surfing conditions.

Skipper Conall Morrison reports from HotelPlanner.com, currently in seventh place: “these were awesome surfing conditions and all of our experienced helms were really enjoying it.

“Top surfing speed was set by Adrian Hemmes at 23.5 knots. All anyone else on deck could do was hang on, but to be on deck in these conditions, and to see the power of the waves and how this Clipper70 performs was breath taking.”

Despite slipping from sixth to eighth place overnight, the same thoughts where echoed on board GREAT Britain. Skipper Andy Burns: “We got a full taste of the South Atlantic with winds gusting up to nearly 60 knots and steadying out around 45 knots, low grey cloud cover and large rolling waves with the tops blown off them. Surprisingly, the entire crew is never without a smile.”

But for 10th placed Qingdao, the thrill of the last 24 hours seems to be a distant memory. Skipper Chris Kobusch explains that the team has managed to find a wind hole and said: “now we are sitting in about four to eight knots of wind and are bobbing around at six or seven knots, which feels like standing still after days and days of high wind and boat speeds.

“The crew had to work hard to get the boat going again, unfortunately there is not much more we can do about it and we have to hope this won’t last for too long.”

Although wind speeds have settled for most of the fleet, residual swell is ensuring that teams won’t be getting too comfortable, or dry.

Dare To Lead’s skipper, Dale Smyth, says: “It has been relentlessly wet and cold, pouring with rain and now that the front has passed through, a confused sea state and fickle winds have greeted us.

“As I type this we are crashing around big confused swell, trying to fly a spinnaker in next to no wind and going in the wrong direction.”

There has been no change at the top of the leaderboard with first placed Greenings firmly maintaining its lead this morning. Interim skipper, Andy Woodruff, reported Greenings’ new record of 329 nautical miles sailed over the last 24-hour period. Separated by just 31 nautical miles, Garmin and Dare To Lead remain hot on Greenings’ heels in second and third place respectively.

Elsewhere in the fleet, Visit Seattle has crept up to fourth place, with Sanya Serenity Coast and Nasdaq holding fifth and sixth position. Liverpool 2018 claims ninth place today with Unicef in eleventh and PSP Logistics in twelfth after resuming racing yesterday.

Teams opting for the most Southerly routes have also had to tackle one of very few obstacles on Race 2, Gough Island. Commenting from Sanya Serenity Coast, skipper Wendy Tuck said: “Gough Island is just ahead, like really just ahead!

“I will make a decision on what side we pass it as we get a little closer, it will depend on how long we stay in this breeze for, or if the system finally overtakes us.”

Looking ahead, the upcoming Elliot Brown Ocean Sprint will make for some gripping Race Viewer Action with the first teams due to start sprinting over the next 24 hours. Ahead of this, Clipper Race Meteorologist, Simon Rowell, explains that conditions should settle over the coming hours and that teams should be back up to full pace, albeit with much more sail up.