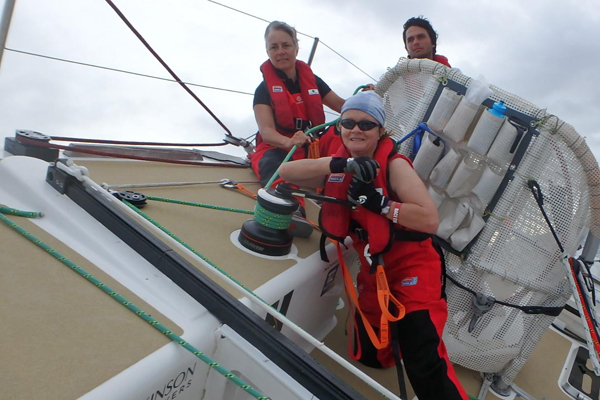 The Trade Winds ride continues to provide great mileage for the Clipper Race fleet as constant wind angles and speeds result in 10 to 12 knots boat speed under heavyweight spinnakers. The race lead remains unchanged with Derry~Londonderry~Doire maintaining its first place position, GREAT Britain still second, though Qingdao has moved into third after passing ahead of Garmin as it changed course west across the fleet.

Derry~Londonderry~Doire Skipper Dan Smith reports: “Squalls carried on through the morning yesterday but by the afternoon they'd passed and we were flying towards our waypoint with speeds in the high teens consistently and big surfs pushing the boat forwards. We were making great progress.

“This ended with an email from Clipper Race Office saying that there was a course change and the next waypoint had moved. We wouldn't be able to carry our spinnaker so down it came and we changed back to white sails on our new course. We still had an impressive six hours doing more than 80 nautical miles. This also meant that a tired skipper and crew were able to rest without the hard work that flying a spinnaker in windy conditions involves.”

The Race Committee extended the course after a far faster than expected Doldrums passage, through which the boats cleared in just four days, compared to nine during the last edition. The Vietnamese national holidays for Tet New Year mean crew are unable to go through immigration so many days early, though the lengthened course should mean they arrive at the earliest time in the scheduled 17 to 21 February arrival window.

Seventh place Da Nang- Viet Nam Skipper Wendo Tuck says: “The course amendment has now been poured over and new waypoints added. The boat is moving fast and I think everyone is happy, it will be nice to have some ‘naviguessing’ to do again in a few days as we have been in the same general direction for what seems like ages now.

“Today’s excitement was plotting our position on a different chart. It is always nice to put one away and get the next one out, it’s all those little milestones that show your progress, next one will be sailing in the Philippine Sea.

“Anyways all is well on the good ship ‘Flo’ (the nickname for our boat) as we truck along with maybe some detours to Da Nang, more time on the oceans can’t be a bad thing.”

Cloud cover from the squall activity of the previous 24 hours has remained today, bringing a much welcome break to the blazing sun and has allowed slightly more comfortable living conditions down below for crew. With less rain and flatter seas, hatches have been able to be opened, providing a chance to air out the boats a little, though temperatures remain in the high 20’s.

LMAX Exchange is now fifth after it suspended racing temporarily yesterday morning to attend to a de-masted yacht. Now back racing, Skipper Olivier Cardin says: “We are making good progress to Amianan Island, our new mark to leave on port after the Race Office extended the course. It's longer now but it will open the game and give us the opportunity to come back.”

Further back, eleventh place Visit Seattle will pass by the Mariana Trench later today. The deepest water on the planet, it is 10999 metres deep, known as Challenger Deep. Put in perspective that is 25 per cent deeper than Mt Everest is high, and greater in height than the altitude commercial plane’s generally fly at.

Mission Performance, in twelfth place after getting stuck in lighter winds for longer than the rest of the fleet, continues to report positive gains, with Skipper Greg Miller noting: “For the last six hours we have been clocking up some of our best speeds of the race so far with a target set by circumnavigating Mission Performance Warrior Gavin Reid of 20.1 knots. It is quite hard to sleep with all the ‘woop whooping’ that is going on from the cockpit right now!Hopefully the novelty will not wear off and we will continue to get these great speeds. We are hoping to be able to hold the kite for a number of days if not longer.”

The second episode of Race of Their Lives 2, the documentary that follows the Clipper 2015-16 Race crew’s adventure round the world, is being aired from tomorrow in Australia and Europe. Click here to read more.

A fun-filled and exciting series of events awaits the Clipper Race crew in Da Nang. Click here to see the stopover schedule.