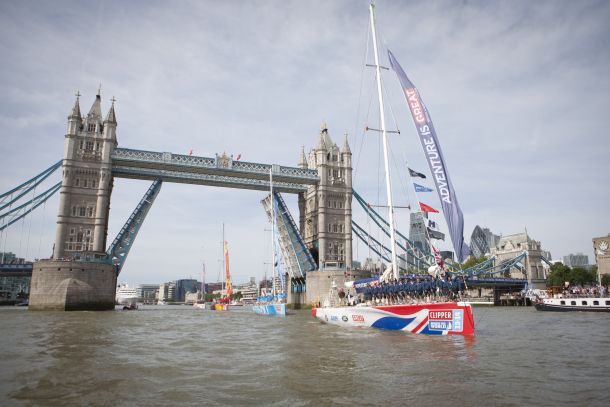 Race Director Justin Taylor has announced details of the departure programme with a parade for all twelve 70-foot yachts going through Tower Bridge, twice.

The world’s longest ocean race will set sail from St Katharine Docks, central London’s only marina, which is the Official Race Start and Finish Port for the second consecutive time.

The fleet will arrive at the marina on Friday afternoon 21 August, with the full fleet expected to be berthed by 1730 BST. The Race Village will open daily from 1100 to 1800 from Saturday 22 until Sunday 30 August, when the fleet departs.

The Race Village will feature a wide range of attractions and there will be a number of free open boats each day until Saturday 29 August.

On departure day, Sunday 30 August, the entertainment gets underway at 1100 with all crews taking the Central Basin pontoon stage between 1300 and 1400.

“The fleet will slip from 1415 and parade in the Thames together with a flotilla of spectator boats,” explained Race Director Justin Taylor. “At 1530 Tower Bridge will open to let all twelve yachts enter the Upper Pool.

“The final parade down the Thames will start at 1600 when Tower Bridge opens again and the fleet makes its way out of London on its 11-month circumnavigation.”

St Katharine Docks say the marina is the ideal location to introduce the race to Londoners. The picturesque waterside community of offices, shops, bars and restaurants offers an ideal day out in the heart of the capital. Visitors to the Clipper Race village in the docks will take in the spirit of adventure with a variety of free entertainment, open boat tours and attractions.

William Bowman, St Katharine Docks Marina Director commented: “St Katharine Docks is proud to once again be the Official Race Start and Finish Port of the remarkable Clipper Round the World Yacht Race. Whether you are a sailing enthusiast or someone who is simply intrigued by courageous human spirit, this is a truly inspiring and unique event taking part in the heart of London that shouldn’t be missed.”

The Clipper Race was established by British yachting legend Sir Robin Knox-Johnston who became the first person to sail solo non-stop around the world in 1968-9. 46 years later at the age of 76, he is still sailing competitively and commented on today’s announcement from his boat Grey Power, ahead of its start in the Transatlantic Race. Sir Robin said:“To be able to mark our tenth edition in another spectacular start from London on the Thames is great news. St Katharine Docks proved to be an excellent base for our race village and I’m pleased we can return there for this landmark series in the history of the Clipper Race which will celebrate its 20th anniversary next year.”

For fans, friends and family left behind when the race departs, there is the opportunity to get online and play the Virtual Clipper Race with an exciting new version of the official Race Game also being revealed today.

“We’re teaming up with the Virtual Regatta for the fourth consecutive edition so that followers of the world’s longest ocean race can once again have the chance to test their skills against the fleet in the Virtual Clipper Race,” explains Clipper Race Global Business and Communications Director Jonathan Levy.

“The Virtual Race is a great way to get involved and is a highly addictive game which provides a brilliant opportunity for fans, friends and family ashore. Players of the game race along the same route and have to tackle the same weather conditions as the actual fleet. Deciding on sail plan and course can be very challenging, even while racing from an armchair!

“For our tenth edition there is a brand new look and feel to the game and former Clipper Race crew will be recognised with specially branded virtual ocean racing yachts.”

Over 60,000 people played the game during the previous edition. The overall leader in the next series will win a week of Clipper Race training at their training base in Portsmouth Harbour.

The Virtual Regatta is created by Paris based Many Players. Founder and President Philippe Guigné welcomed news of the new partnership to provide the Official Clipper Race Game. He said: “I am very pleased to be working with the Clipper Race for their tenth edition. We aim to grow the audience even further in the 2015-16 series, especially with the new interface design and special features we are introducing.”

Details on how to sign up for the Virtual Clipper 2015-16 Race will be announced shortly.