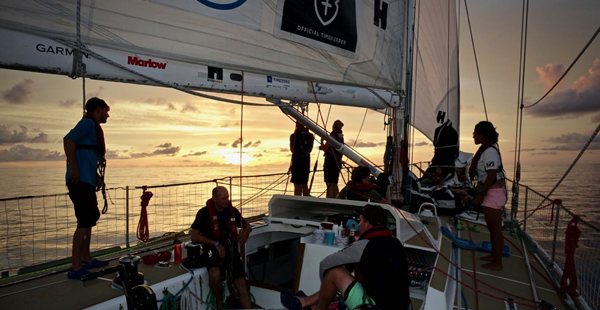 Following the recent equator crossing ceremonies, the north easterly trade winds that the teams have been wishing for have finally kicked in for the fleet leaders on Day 11 of Race 7: The Forever Tropical Paradise Race.

The top three remain unchanged from yesterday but it is close at the top with just two nautical miles (nm) separating the race leader, Qingdao, from Dare To Lead, in second.

Qingdao skipper Chris Kobusch reports: “As wished for the North Easterly trade winds finally arrived. We got the spinnakers out of their bags and are running towards Sanya at 10 plus knots again.

“Over the next 300nm, we will pass quite a few islands, reefs and shoals and I hope I will come back one day to properly explore those. The diving here must be amazing. For now, they are slightly in our way towards our next waypoint and we have to navigate around them.”

Slightly further north of the top two teams, and around 26nm off the lead, is Sanya Serenity Coast and skipper Wendy Tuck is delighted with the breeze filling in: “Yippee we are moving and in a good direction. It’s still hot and steamy though.

“We are also now on the lookout for those pesky squalls that will be riding through on the back of the low pressure that first sucked all the air into it leaving us no wind, now spitting out fits and starts in the form of squalls.”

The big movers of the day are Unicef (fourth) and Liverpool 2018 (fifth), who have taken a more northerly route and moved up from eighth and ninth respectively, each covering over 100nm in the last twelve hours.

Unicef skipper Bob Beggs cannot wait to get to Sanya and reports: “The long awaited and worked for trades have now kicked in with vigour and we are charging along under our Code 3 spinnaker. We are now pointing at China and the miles to Sanya are at last counting down. The reports we have had are suggesting it’s going to be a great place to explore and relax. Can't wait.”

Also taking a more northerly route is PSP Logistics although the team, which was in seventh place, has now gone into Stealth Mode and will not re-emerge until midnight.

Skipper Matt Mitchell has reported good progress though, despite some squalls: “The wind started filling in for us yesterday afternoon which saw us cover in six hours what it took 24 hours to make on the previous day.

“There was a bit of a spanner in the works this morning though as we got caught in a squall system, with cell after cell coming over us in quick succession. They must have cancelled each other’s wind out though as we were bobbing along not making good ground at all.”

To the west, the teams have not been so fortunate with the wind with Visit Seattle and Garmin each slipping a place to sixth and seventh respectively. Visit Seattle skipper Nikki Henderson explains: “We aren't really moving. Everyone is trying to avoid heat exhaustion. I'm imagining ice cubes clinking in my drink as I gulp down six litres of water a day.”

Even further out west, and closer to the rhumbline, is Nasdaq in eighth place and skipper Rob Graham explains that the team is working hard for every mile: “We are in an area of light and variable winds, with occasional, relatively gentle, squalls. These changes in wind strength and direction necessitate frequent changes of headsails: I think we've averaged about two an hour over the past day and a half.”

Also working hard on frequent sail changes is HotelPlanner.com in ninth place and skipper Conall Morrison has reported that “it’s been a day of ups and downs.” As a nominee in the Irish Sailor of the Year Awards, which took place last night, Conall took time out in his blog today to thank readers for their support.

He says: “Unfortunately I was pipped at the post for the award which went to Conor Fogerty (a former Clipper Race skipper) for his result in the Single-Handed East-West Transatlantic Race in the summer, a much deserved winner.”

Back in 10th place, things are finally looking up for GREAT Britain and skipper David Hartshorn reports: “After some frustrating days, the elusive North Easterlies we have been in search of appear to be kicking in. We are currently sailing on a fine reach with a pretty constant wind strength and direction; combined with a flat sea state we are achieving the best boat speed we have seen in a number of days.”

The trade winds are predicted to become steadier but there is always the risk of squalls, which the teams will need to be on the lookout for.

Keep up to date with how the incoming trade winds affect the fleet and its progress, towards the Elliot Brown Ocean Sprint via the Clipper Race Viewer and hear more from the skippers and crew on the Team Pages.

Race 7: The Forever Tropical Paradise Race will finish in Sanya Serenity Marina in Sanya, and the fleet is expected to arrive between 21 – 25 February after roughly 23-27 days at sea. Although the finish line is still almost 3000 nautical miles away, crews are excited to explore Sanya and all it has to offer during the stopover, and you can find out more here.