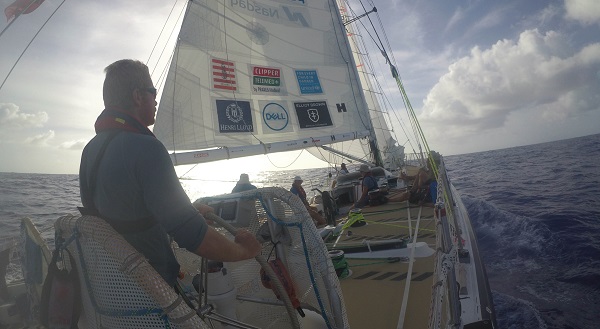 Half of the Clipper Race fleet has begun its Elliot Brown Ocean Sprint but a fickle breeze and upcoming wind holes could result in changes in the standings on Day 17 of Race 7: The Forever Tropical Paradise Race to Sanya in China.

Qingdao remains in the lead for a fourth straight day but the light wind has the team concerned, as skipper Chris Kobusch explains: “The steady breeze we had over the past few days disappeared and we are back to light wind sailing. The main sail and the kite are flogging with the swell and it is difficult to hold a steady course and speed.

“We are hoping it is not only us stuck, but the rest of the leading pack too, so we don't lose too much ground and/or the lead.”

Further north, second-placed Sanya Serenity Coast and PSP Logistics, in fourth, are both currently maintaining good speeds but, with winds beginning to lighten, PSP Logistics skipper Matt Mitchell reports: “The area of changeable winds is now upon us and the next 12 hours or so will tell if we've done enough to skirt around the edge of the worst of the light wind.

“We are now waiting for the wind to start shifting to the south east, where we will gybe and start heading on a more direct course while keeping fingers crossed that we keep the breeze as it makes its way around the clock.”

Dare To Lead, who has opted to follow Qingdao’s more southerly route, moved from fifth to third place overnight but skipper Dale Smyth says any further progress is being hampered: “Well, we are well and truly sprinting in the Elliot Brown Ocean Sprint and flying along at six knots. Why is it that we are always crawling through the sprints with no wind? I guess it’s just luck of the draw.

“Anyway, we have had some very smooth sailing over the last 24 hours, slipping along under spinnaker in a flat sea and we only have around 400 nautical miles until we turn the corner at the northern end of the Philippines.”

Unicef and Liverpool 2018, in fifth and sixth place respectively, are the other teams who have begun their Elliot Brown Ocean Sprint. Whilst there is currently just over 100nm separating the top half of the fleet, Unicef skipper Bob Beggs expects the leaderboard to change in the latter part of the race, saying: “The disposition of the fleet on a wide front and an unreliable forecast with wind holes a plenty, means this race is far from won or over. I expect we may see the pecking order change over the next few days as positioning, luck and tactics replace the drag race of this last week.”

Nikki Henderson, skipper of the seventh-placed Visit Seattle, is also hoping for a shakeup in the standings in the final days of the race to Sayna. Visit Seattle is currently 240nm off the lead after opting to go for Scoring Gate points earlier in the race and comments: “As we sail towards the high pressure driven weather, I imagine the fleet will begin to compress a little. We are doing our best to keep the guys behind, behind and trying to catch up in front!

“Dealing with some pretty changeable winds this past week, whilst watching the top six consistently maintain 10 -12 knots has been pretty morale sucking at times … so hopefully we can try and cut down the miles between us and them over these next few days.”

Like Visit Seattle, eighth-placed Garmin is just hours away from beginning its Elliot Brown Ocean Sprint and after a busy 24 hours of sail repairs, skipper Gaetan Thomas says: “Now the weather is a bit more settled, but for how long is the question. The Elliot Brown Ocean Sprint doesn't look that great either for the teams ahead or for us with wind holes and a massive wind shift ahead but we will do our best as always and definitely hope to score some points so we can finish this leg properly.”

Nasdaq leapfrogged HotelPlanner.com for ninth place overnight, though the gap remains less than 10nm, whilst GREAT Britain is another 50nm astern in eleventh. HotelPlanner.com skipper Conall Morrison comments: “Yesterday evening saw us gybe onto port tack for a few hours in an effort to dodge a light patch of wind that is forecast ahead and to set ourselves up for the Elliot Brown Ocean Sprint. We are now back on starboard tack and should begin our sprint at around sunrise tomorrow morning.”

As much of the fleet battles with the unsteady breeze, Clipper Race Meteorologist Simon Rowell has highlighted the possibility of strong squalls, some with winds of up to 50 knots that will present as the teams near the south of Taiwan.