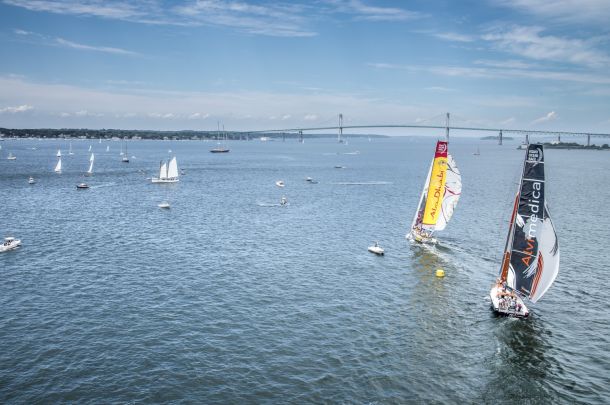 The Clipper Race fleet has departed The Netherlands in the final stage of the world’s longest and toughest ocean race, which returns to London this Saturday (12 July) after covering more than 40,000 miles between six continents over eleven months.

Race 16 of the global series got underway at 1330 local time (1130 UTC) today, 10 July, off the Dutch coast near Den Helder for the 250 mile North Sea sprint to London, UK. The teams are expected to have a closely fought battle on their hands as the matched yachts go head-to-head to secure maximum points and improve their standings on the overall leaderboard.

The teams are due back in the UK on Saturday morning in a spectacular Parade of Sail up the Thames followed by the prizegiving in St Katharine Docks by Tower Bridge.

Jamaica Get All Right was first over the line, followed by Henri Lloyd and GREAT Britain in third with all teams flying spinnakers in 15 knots of wind.

Simon Talbot, skipper of home port entry GREAT Britain, in second place overall, said: “Everyone has mixed emotions about it being the last race. It has been nearly a year of mine and the crew's lives with many of highs and lows.

“We have been through every kind of weather system with two hurricanes, a tornado that knocked us down, the frustration of the Doldrums and we even spotted a piece of iceberg.

“The crew are really pleased with where we are on the leaderboard and have high expectations on this final sprint too as we are sailing into my backyard – the Thames Estuary.

“Being the British boat we are very motivated to have a good crack at this final race home into London.”