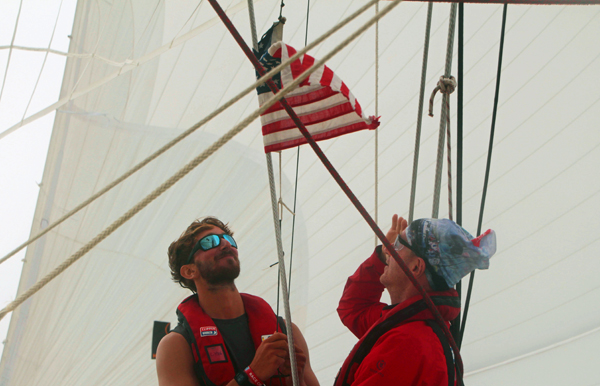 The final Clipper Race teams – Qingdao, Visit Seattle, Dare To Lead and Liverpool 2018 – have arrived into New York to wrap up the US Coast-to-Coast Leg 7, the penultimate stage of the Clipper 2017-18 Race.

And it was an extra-special arrival for three crew members on board Visit Seattle, all of whom call New York home: Duffy Drum, a Retired Athletic Director, and Chris Goodwin, a Construction Project Manager, hail from New York, whilst round the world crew member Shannon Dean, a Nurse from Seattle, grew up on Long Island.

All three specifically chose this race to enjoy this unique experience of racing into their home port. After crossing the finish line at 0618UTC on Thursday to take ninth place in Race 11: Nasdaq Race, Chris Goodwin said: “I was filled with mixed emotions as approached that familiar NYC skyline that I call home.

“I stepped off this boat with a heavy heart, knowing that one of the most memorable adventures of my life has come to an end.

“Sure, it will take some time for me to truly understand how this experience has changed my life, but I certainly know that I will never forget it and will likely talk about it for years to come.

“I've been humbled by life at sea, racing non-stop under sail power on this racing machine with some incredibly strong and respectable people. While I'm looking forward to the next chapter of my life, a part of me will be forever sailing on Visit Seattle.”

As well as collecting four points for finishing ninth, Visit Seattle will add three bonus points to its overall tally for being first through the Scoring Gate. However, Qingdao looks set to stay in second place on the overall leaderboard after crossing the Race 11 finish line in eighth place at 03:52:45 UTC on Thursday 14 June.

Qingdao crew member Susan Robins, a Leadership Coach from Hampshire taking part in Legs 5 and 7, comments: “It was fun; we had some really good times. The weather was interesting. We saw some really exciting sunrises and sunsets and a huge thunderstorm which resulted in us being parked in the middle of nowhere. It was a bit hard watching everyone sail past but here we are!”

After an incredible maiden win in Race 10, Dare To Lead couldn’t recreate the success in Race 11, crossing the finish line in tenth place at 0810 UTC. However, the team is looking forward to spending time in the city that never sleeps.

Skipper Dale Smyth is extremely proud of their achievements, saying: “I’m happy to be here in New York, it wasn’t our best race but it’s nice to arrive, especially on such a beautiful New York day.

“We’ve not had a fantastic race and have struggled to catch back up to the bulk of the fleet after an initial bad upwind start. We subsequently fell into a couple of wind holes that only plagued the tail enders but that is the ups and downs of ocean racing and with each leg we complete, the crew can be very proud of what they have achieved.”

Wrapping up the arrivals into New York was Liverpool 2018, which finished Race 11 in 11th place at 0012 UTC on 15 June. Whilst it wasn’t the most successful leg for the Liverpool 2018, Race 11 was a special one for round the world crew member James Macfee.

Macfee says: “It wasn’t too tricky a race, just the frustrations of being towards the back of the fleet. We had good winds, nice sailing, warm weather and we were basically sailing through my back garden of Cayman.

“It felt like a bit of a moment when we crossed Caymans Latitude and Longitude it feels like, on this journey for me, that it’s full circle already, even though the first part started by plane. Definitely feels like I am on the way back now.”

The Clipper Race fleet will be berthed in Liberty Landing Marina and North Cove Marina during the duration of the New York Stopover.

The first stage of Leg 8: The Atlantic Homecoming Leg, a 3,000 nautical mile race from New York to Derry-Londonderry in Northern Ireland will begin on 25 June, with the fleet heading back across the Atlantic for the final time ahead of Race Finish in Liverpool on July 28.