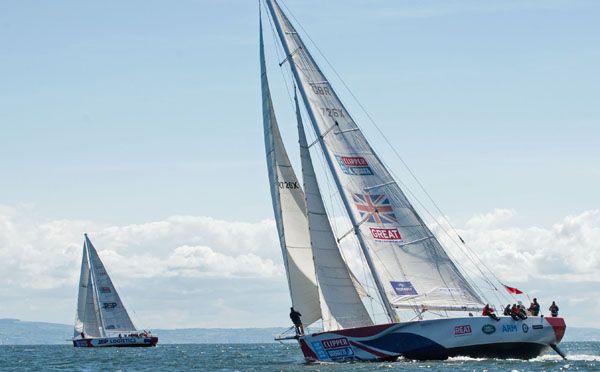 Three months from now, the world’s largest fleet of matched ocean racers will make its debut on the start line of the 84th JP Morgan Asset Management Round the Island Race (RTI) against 1,600 competitors.

It will be the eleventh time that Clipper Events has entered the largest single sailing race in the world and the fourth largest participation sporting event in the UK. This year, a record of 16 Clipper Events yachts will compete, including the newest fleet of twelve Clipper 70-foot ocean racers, and four Clipper 68-foot yachts.

On board the fleet of Clipper 70s will be 144 employees from RTI Race Title Sponsor, JP Morgan Asset Management. Vice President of the Corporate Investment Bank, Cy Lloyd-Jones who has been the Commodore of the JP Morgan London Sailing Club for the past eight years says: “With the impressive size of boats Clipper Events offers, it is easy to spot the other entries on the water, which adds an extra level of competitiveness.

“The calibre of the Clipper Events staff both on and off the water is very high. The skipper and mates are enthusiastic and professional, it’s a level of professionalism that is hard to find elsewhere in the sailing industry and we are looking forward to taking part in this classic race.”

The leading global financial service will be racing in the Clipper Yacht class for the chance to win the Vaphio Cup against four Clipper 68’s, chartered by private clients and companies Standard Chartered Bank and the RTI official clothing partner, Henri Lloyd. The class was created in 2009 after event organisers the Island Sailing Club donated the Cup to Clipper Events for its class and each yacht design will race under its ITC handicap.

Designed by renowned naval architect Tony Castro, the Clipper 70 is fast and dynamic, breaking speed records of 35 knots. It features twin helms, twin rudders and a six-foot bowsprit, which allows the inclusion of three large asymmetric spinnakers and a suite of Yankee headsails, which combine to increase performance and boat speed. The fleet is tried and tested with over 40,000 nautical miles of offshore ocean racing across some of the world’s most hospitable oceans whilst the Ed Dubois designed Clipper 68 has completed four circumnavigations.

The famous 50-mile race around the Isle of Wight sees 1,600 yachts take to the Solent. Teams of individuals come from all walks of life from across the globe with a variety of sailing experience, ranging from complete novices who have never sailed before to famous faces from the sailing industry.

Founded by legendary yachtsman and Clipper Ventures Chairman Sir Robin Knox-Johnston in 1995, Clipper Events is no stranger to adventure. It stands apart from other sailing event providers by using its unique fleet of identical ocean racers for iconic sailing events and hospitality and development experiences in the UK and Australia in Sydney, which also meets the business and relationship development objectives of UK and global companies.  Previous sailing experience is not required as training is provided by professional Clipper Events staff.

Commenting on this year’s race, Sir Robin Knox-Johnston says: This is Britain's largest sailing participation event and our fleet of twelve new Clipper 70’s and four Clipper 68’s will be up against some seriously fast yachts as well as some intense competition between themselves. The prospect of racing against as many as 1,600 boats in a crowded course of the 50 miles around the Isle of Wight really makes this one of the most exciting days in the sailing calendar. I wish them all an exhilarating day of competitive racing.”