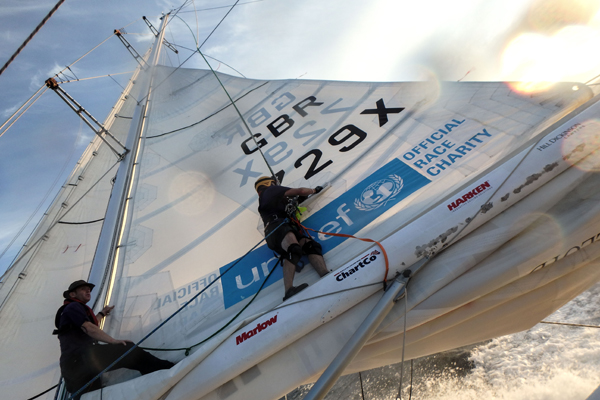 Working on Unicef in the Clipper Race. Photo Clipper Ventures.

As the crew gradually settles into the life of ocean racing again, attention has now turned to the tactical decision of whether or not to go for the Scoring Gate (shown on the Race Viewer). This would allow the first three teams through the gate to collect extra points: three for the first team through, two for the second and one for the third, but given the course most are on to Cape Town, heading south towards the Scoring Gate would involve a diversion, and consequently a possible fall in the overall finishing positions.

Da Nang – Viet Nam is currently in third place behind leader Garmin and Derry~Londonderry~Doire and Skipper Wendy Tuck says her team are weighing up the benefits of whether or not to go for the Scoring Gate points: “The crew is doing an awesome job, and we’re starting to think about this Scoring Gate. It has the added double jeopardy of the two boats starting behind us, so you go through and pick up some points only to be knocked off by LMAX Exchange or Qingdao. At the moment there is a chance for us to pick up a point or two, so that will be the next tough decision: To go for it or not? For now though, boat speed is all that matters and the call of ‘drive it like you stole it’ can be heard.”

The ten teams that started the Stormhoek Race to the Cape of Storms on Wednesday are all within 3000 nautical miles of Cape Town now. Despite an initial setback that saw it return to port for spare parts and consequently slip to the rear of the fleet, PSP Logistics could make up some points by heading for the Scoring Gate. After many crew members struggling with seasickness the last two days, PSP Logistics Skipper Max Stunell says: “We now have an almost fully operational crew, the sea state has moderated and reefs have been shaken out. The fleet as a whole is making good progress and it all looks very tight there at the front. The big question remains on how this high pressure is going to form and behave to the south-east of us by the Scoring Gate.”

Leader Garmin has made the greatest distance in the last twelve hours, managing to cover 128 nautical miles. While its progress is swift, competition is about to heat up because tonight the first and second placed teams in Race 1, namely LMAX Exchange and Qingdao, are about to start the Stormhoek Race to the Cape of Storms, pending final inspections and approval by the Brazilian authorities today.

Once the planned inspection at 1030 local time (1330 UTC) the yachts will be re-launched and motor sail to the starting position. This position has been calculated to be exactly the same distance as the other ten yachts will sail, 3387 nautical miles. The start will employ the Le Mans starting procedure and will be at approximately 2200 local time or 0100 UTC (Sunday).