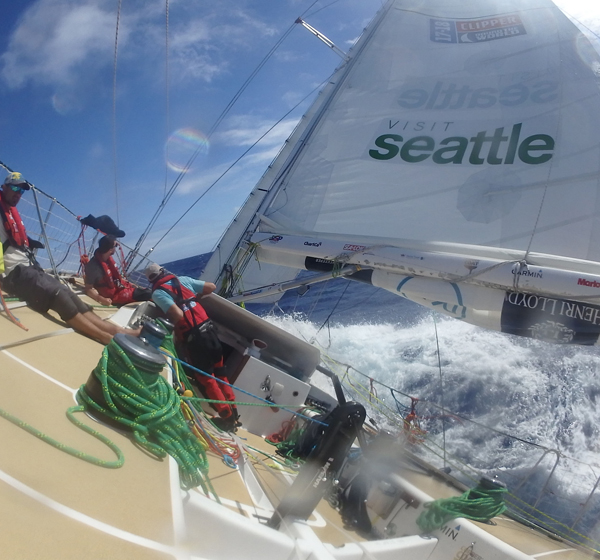 Visit Seattle on the wind.

After thousands of nautical miles sailed across the Atlantic Ocean, Visit Seattle, Sanya Serenity Coast, and Unicef again hold first, second, and third position on the leader board. For some, the finish is almost in sight, and for others, the hope is that a change in wind direction will bring new tactical decisions to break up the fleet.

According to leading Visit Seattle Skipper Nikki Henderson, the path to Uruguay is turning into a ‘drag race’, saying: “All of us are screaming along at courses anywhere from 195 to 215 degrees, under white sails of varying sizes (two big triangular sails at the front), straight lining to Uruguay.

“I imagine things will start to get more interesting in the next couple of days as the wind backs from the ESE we are experiencing now to NE. This will mean flat boats, spinnakers, and more tactical choices as to when/where to gybe. We are looking forward to it, and hoping for good strong winds for our trusty heavyweight spinnaker.”

With 25 days ocean racing under their belts, routines are set and life on board has become the norm, though thoughts are turning to the comforts of land. Skipper of the second placed Sanya Serenity Coast Wendy Tuck comments: “We are still charging along southwest. Another day on a lean is another day closer we are getting to Punta del Este. I think it’s a bit early yet, but we have already started talking about what we will eat and drink when we arrive.”

Behind the fourth placed HotelPlanner.com, PSP Logistics, Qingdao, and GREAT Britain continue jostle for positions, with less than 10nM between them. PSP Logistics is currently fairing the best in fifth place and Skipper Roy Taylor reports: “We are having a good battle with the 'Dragon Boat' Qingdao…the miles are falling astern and we can really sense the end of the Atlantic Trade Winds Leg 1. It's amazing that after over 4000nM, the pack is still so close with everything still to play for.”

Qingdao Chris Kobusch agrees, saying: “After thousands and thousands of miles racing across the Atlantic, the fleet is still surprisingly close together and our race buddy GREAT Britain, who we have been racing closely with since Race Start, is in AIS and VHF range again.”

With PSP Logistics and Qingdao so close, Skipper of the sixth placed GREAT Britain Andy Burns comments: “When the boats all get downwind again, with the choices of inshore or offshore in our approach to Punta del Este, that’s the point when the competition will really heat up again.”

Garmin and Liverpool 2018, currently in eighth and ninth respectively, are also both locked in a duel with less than a nautical mile between them. Garmin Skipper Gaëtan Thomas says: “We’ve got Liverpool 2018 on our starboard side and on our screen with the Automatic Identification System (AIS). It looks like a little match racing is on the menu today!”

Though the tenth placed Dare To Lead has been making good progress south, the team is struggling to make up any miles on the leading pack. Skipper Dale Smyth reports: “A squally night last night with the wind up and down between 15 and 35 knots. Good progress however, and we really are flying south. By the looks of it, we are all pretty much in the same conditions so we are hoping for something tactical coming up.”

The forecast is still consistent, with the South Atlantic high remaining stable. Squally activity over the next couple of days will bring the only short changes in conditions for the fleet.

Greenings, currently eleventh, is focused on the Elliot Brown Ocean Sprint and Relief Skipper and Deputy Race Director Dan Smith says: “Since last night we have been sprinting. I'm not sure we have the weather to win this one, but even if we don't, I always relish the opportunity to sail the boat flat out for 300 miles. Speeds are currently mid 10 knots, but hopefully a backing wind can help increase the average.”

The winners of the Elliot Brown Ocean Sprint will be announced once all teams have logged their elapsed times. For Nasdaq, its sprint started today, so there is still everything to play for.