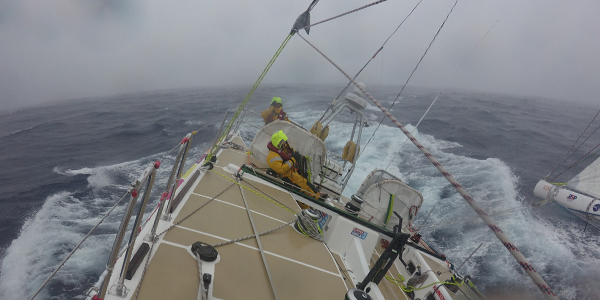 As a low pressure front continues to develop over the fleet, the circulatory winds are increasing with gusts of up to 50 knots, as the front runners approach the halfway mark in the Da Nang New Discovery of Asia Race.

Derry~Londonderry~Doire maintains the lead followed by GREAT Britain 3.8nm behind and Qingdao a further 43nm back. With the frequent squalls in these tropical conditions, it is essential that teams keep on top of boat maintenance as well as concentrating on speed, as Qingdao Skipper Bob Beggs explains:

“We have lost about half a metre of mast track and I've been involved with effecting a suitable long lasting repair.  We are now awaiting for the drill to recharge so I have come down from the mast gooseneck to write this blog. Life on board continues watch on, watch off.  Morale on board is good despite the temperatures down below decks.

“Last night we had several long squalls with wind speeds of 50 knots more which made for exciting sailing, bearing away with our Yankee 1. The spinnakers are still in their bags after two or three hopeful moments when the wind angle looked about right but  only lasted a few minutes.”

Six nautical miles behind in fourth place is overall race leader LMAX Exchange, which has its sights on Qingdao as it continues the mid-fleet reshuffle with ClipperTelemed+ and Garmin, both within 4.5nM. LMAX Exchange Skipper Olivier Cardin says: “Since yesterday we are making good speed to Luzon Strait as we made 270 nautical miles. The wind began its shift to the right and we are now able to take some good surf.

“The night was quite tough with a succession of squalls blowing to 50 knots. The watches did a really good job on trimming in these conditions. These weather conditions are coming from a low pressure just growing behind us and taking quite the same direction as us. Like in Leg 3, we will take this depression and try to run as fast as possible with it.

“Breaking news, at 2300 UTC this morning Qingdao popped on AIS. A target is in sight!”

Towards the back of the fleet, the teams continue to search for the stronger winds that will help them pullback some miles and in the last 24 hours, that is what has happened for tenth placed PSP Logistics. Skipper Max Stunell says: “Overnight we successfully made it around the bottom of the forming low which slingshot us back up towards the fleet. This has thankfully put us in the same weather as them although initially the wind was not as strong.

“The dilemma we were faced with was to fly the kite in the tricky sea state and almost certainly get a wrap. I suppose that is the peace of mind an anti-wrap net gives you but as the first squall came through and our boat speed was consistently in the mid-teens doubt was removed. The wind has since filled in and we are now averaging good speeds with white sails alone. The wind now looks pretty consistent and will hopefully allow us to take some mileage out of the boats in front of us.”

Garmin Skipper Ashley Skett says his crew is on a mission to break his top speed record of 21.5 knots, to follow their progress and all the fleet then stay tuned to the Race Viewer which is updated hourly.

In order to encourage good seamanship and make sure teams maintain their equipment for safety reasons, there is a penalty point system in place when irreparable damages occur. To read about the penalty points incurred by the teams in Leg 4, click here.