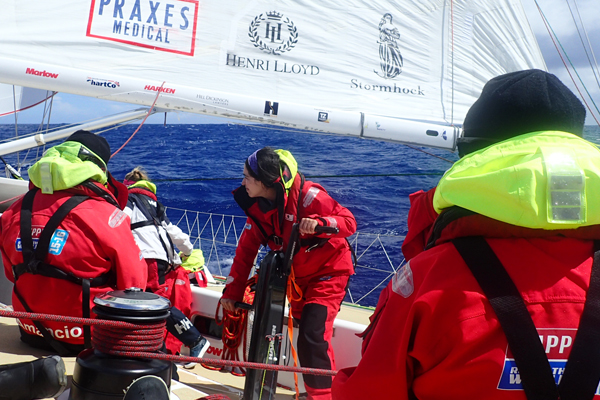 Day 8 of the PSP Logistics Panama Cup and all the teams have been taking advantage of great downwind sailing under their spinnakers as temperatures rise and shorts are shaken out, with foulies starting to be left below deck.

“The important move will now be to get east without losing our southerly advantage and that will all depend on the winds we are dealt… GREAT Britain gybed off this morning and since then we've been without any new sails on the horizon, so it's back to our six hourly position reports to see if we are keeping pace with the fleet.”

It’s all very tight on the leader board (as at 0800 UTC) with the top six teams within eight miles of each other. Within an hour Unicef dropped from second to sixth going from 2nM behind leaders LMAX Exchange, to 8nM as the leaders gybed onto starboard tack to head south away from Garmin which was still heading east at the time. You really need to look at the map on the Race Viewer to get a real feel of what’s happening, as it’s so close and the automatic leader board can be a little misleading as measurements move from one waypoint to the next.

LMAX Exchange skipper Olivier Cardin notes: “Sometimes, like this morning and this evening, Garmin appears on the AIS (Automatic Identification System). It's quite an event on board. The main question coming after is “Is he faster?” Sometimes the answer is yes…

“The match is completely open as six boats are within about ten nautical miles, spread along a north-east / south-west line. The forecast is nice, with the wind easing progressively in a ridge off the North Pacific High.”

That is certainly going to be the next big challenge as the wind drops over the next 24 hours, which may not only see the fleet compress even further, but also a few may have an advantage in the east-west split or come to a complete halt altogether in a pesky wind hole.

Our meteorologist Simon Rowell says: “The overall situation is much the same, and with that low out the way it should be a lot steadier today, albeit lighter. The ITCZ, or monsoon trough, (Doldrums) is in the north part of its cycle now, and should start heading south a little over the next few days.”

Ichorcoal, ClipperTelemed+ and Derry~Londonderry~Doire are within a mile of each other around 4-5nM more distance to finish behind LMAX Exchange on the Race Viewer leaderboard and are enjoying the rising temperatures. (Until they become too hot in the Doldrums).

Skipper Dan Smith aboard Derry~Londonderry~Doire observed: “The weather is warming up which means the clothes selection for the oncoming watch hasn't been easy. This afternoon we had the full range from full foul weather gear to shorts.”

Skipper Ash Skett on Garmin added: “The weather is now noticeably warmer and I'm pleased to report that the shorts have made it on deck for the first time since Da Nang…

“Today is National Tourism Day. This is one that we can safely tick off. Tourism doesn't come any more extreme than the Clipper Race…what better way of seeing the World!”

*All positions correct as of 0800 UTC