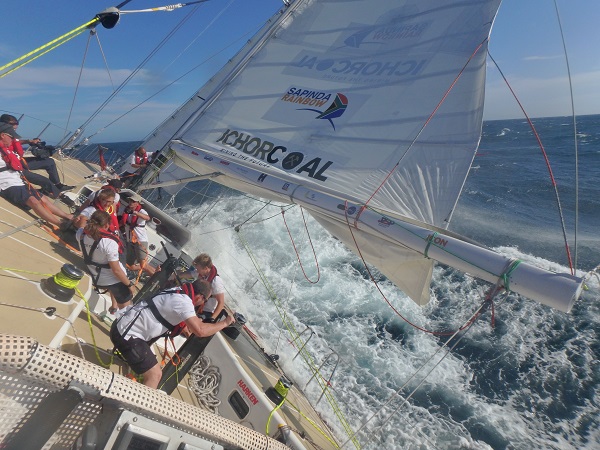 Some of the fleet have been experiencing a period of light winds, but strong conditions associated with the front appearing are due to fill in over the next 24 hours with gusts of up to 50 knots being predicted for the main fleet by Clipper Race meteorologist Simon Rowell.

The leaderboard has seen various place shuffling over the past 24 hours. Whilst Garmin still leads, GREAT Britain has moved into second place, Derry~Londondonerry~Doire has dropped into third and IchorCoal is up into fourth place.

As explained in yesterday’s Daily Update, the eastern group of the fleet sailed into an area with a front just south of them and an area of light winds ahead of them due to the South Atlantic High evolving as it moved across the South Atlantic.

Ashley Skett, Skipper of race leader Garmin, described the varying wind conditions: “Another day, another completely different weather chart and the front moved over us after all, as the pressure systems to the south moved closer.

“It left us with a very light breezes at first and the wind eventually decided to take Sunday off and disappeared altogether for a few hours as the opposing wind directions in the north and south cancelled each other out. We were almost stationary for four hours or so while we broke through the front, but finally we are now in a fresh new easterly breeze which is forecast to back all the way around until it's behind us again,” Ashley added.

The teams were also making their final decisions as to whether to risk going for the Scoring Gate or not because of the complicated weather patterns.

Da Nang-Viet Nam Skipper Wendy Tuck confirmed her team was heading for the gate in attempt to pick up the maximum three bonus points on offer, and the other most southerly yacht Derry~Londonderry~Doire also appears to be sailing for the gate.

Wendy says: “We are now committed since the new weather came through this morning. We decided we had to go for the Scoring Gate. We would have to sail through a big hole to keep in the pressure to the north of us, if we carry on to the gate we might just miss a small hole and be lucky. Either way it’s tough, but that is yacht racing.

“We are belting along again upwind towards the gate, the medium weight spinnaker is packed away and it is white sails again. I’m sleeping fully kitted up on the saloon floor so I can be up on deck in a flash, just like a tiger.”