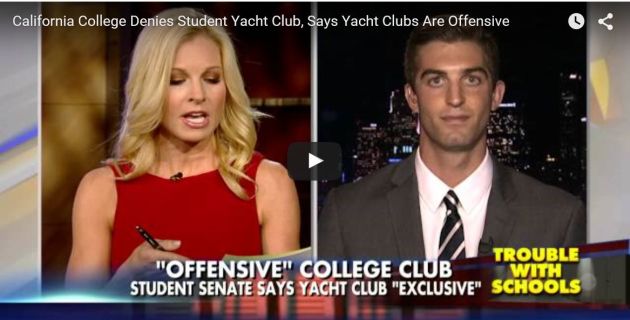 At Pitzer College’s weekly student Senate meeting this past Sunday, a proposed Yacht Club was turned down on the grounds that its name was offensive.

“Student Senate voted against this club instatement last night, as the majority of Senators found the name ‘Yacht Club’ to have a particularly offensive association with Yacht Clubs and a recreation known for being exclusive,” wrote Taylor Novick-Finder (PZ ’17), an Environmental Senator, in an email on Pitzer’s Student Talk thread.

The club requested $5,000 in funding to go towards renting boats and hiring instructors, though clubs do not have to receive the full amount requested from the Senate (or any money at all) if the Senate approves them. According to Senators, this was only the third club to be rejected by the Senate in the history of Pitzer College. The first two, the Hammock Club and the Cake Club, were denied because they were too similar to existing clubs already funded by Pitzer.

“We as a Student Senate have overreached our boundaries,” would-be Yacht Club president Jordan Fox (PZ ’16), who is also a member of the student Senate at Pitzer, stated in an interview with the Claremont Independent. “We should be looking for ways to fund clubs that promote a sense of community within the student body.”

Fox has never sailed before, and was hoping to start a club that teaches and promotes boating and sailing. “It’s frustrating that we don’t really have a precedent set as far as which clubs we’re willing to approve and which ones we aren’t. It’s almost like this is a satire at this point.”