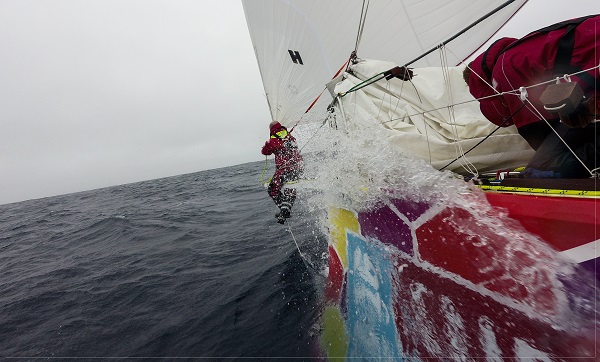 Race 2, The Stormhoek Race to the Cape of Storms, is headed for a dramatic denouement, with Derry~Londonderry~Doire, Garmin, GREAT Britain and Mission Performance all fighting to be first into Cape Town.

Keeping Race Viewers glued to their screens for yet another day, Derry~Londonderry~Doire has gone into first again as of 0800UTC, re-taking the top spot from Garmin, which is now just 1.1. nautical mile behind it. GREAT Britain is 2.41 nautical miles behind the Northern Irish entry in third place, with Mission Performance only six miles behind GREAT Britain.

Following the frustration of yesterday’s light wind conditions, the front of the pack are now in strong winds which will increase further the closer they get to Cape Town (Derry~Londonderry~Doire is now 141 miles away).Garmin Skipper Ashley Skett, whose team had led the fleet for most of the race until yesterday, described the fight to the finish and the conditions that led up to this close finish.

“Where in the fleet we will arrive is still not certain and it's looking like it will be a nail-biting finish with us, GREAT Britain, Derry~Londonderry~Doire and Mission Performance all still in the running for a podium position.

“The weather could not have been any worse for us recently with a big high pressure forming a light-airs barrier that saw us grind to a halt, then dissipated 12 hours after we ran into it and before the yachts behind got there, allowing them to catch up and then simply keep on sailing.”

“Fortunately we are now through that and racking up the miles, with the winds forecast to build significantly as we get closer to the continent, reaching 30 knots on the charts but potentially significantly more in gusts, especially in the lee of Table Mountain. The race is far from over and the finishing positions could depend on how well each team copes with the challenging sailing ahead.

Summarising, Ash adds: “Without doubt this leg has been significantly more of a challenge than the first, living up to all expectations of big winds, big seas and tough sailing.”

Daniel Smith, Skipper of Derry~Londonderry~Doire, said last night had been frustrating with the low winds and the crew had to work hard to keep the boat moving before the wind shift came.

“We knew the wind was overdue and a direction change would happen too. We also knew the clouds at low levels were moving fast. The wind would come, it was a matter of time and until then we had to keep moving so we didn't end up too far behind.

“Sailing under white sails through the night I was on constant watch on Automatic Identification System and radar for GREAT Britain. I spotted her and noticed she was going much faster than us, so up went our spinnaker and we were off, a drag race, neck and neck with 170 miles to go. We have been here before,” he added.

Westerly yachts Qingdao and LMAX Exchange are both still in the Ocean Sprint phase, but taking very different routes to the finish line. Qingdao has headed much further south below 40 degrees following its decision to go for the Scoring Gate, and is currently enjoying stronger breeze. Its strategy is to sail under the high pressure system and light wind area to the west of South Africa. It will then gybe toward the finish.

However, after elapsed time based on average speeds so far, LMAX Exchange is in first place overall in the final race standings, with Qingdao in seventh.

Unicef and PSP Logistics are both in Stealth Mode. They will be taken out of Stealth if/once they get within 250 nautical miles of the finish.

The first teams are expected to arrive into port later tonight, from 2200UTC/0000 local time, however, those times could slip in the final approaches. Click here throughout the day to be kept up to date with the latest expected arrival times.

Who will manage the gusty conditions off Table Mountain best and be the first into Cape Town? Will Qingdao or LMAX Exchange’s southerly or northerly route pay off best?

Follow the updates via the Race Viewer to see this nailbiting finish play out.