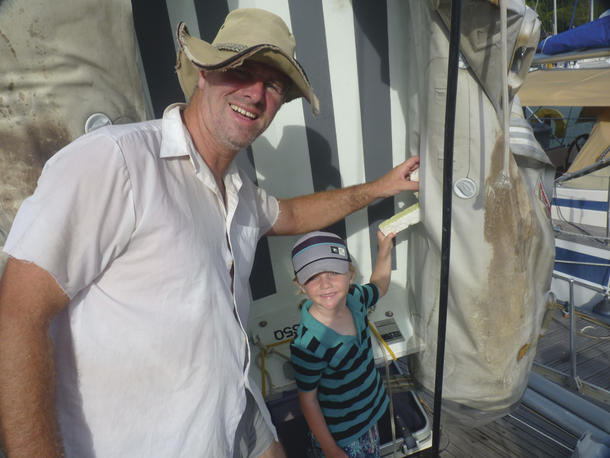 What to do when your dinghy is falling to pieces and you are fighting a constant battle between punctures appearing and patching them up?

Bin it and spend $4000 on a new one? Go secondhand, where good ones are hard to find?

A couple of years ago, after a weak painter gave way and we lost our dinghy overnight in the Duke Islands of Queensland, we bought an unknown brand rigid inflatable boat (RIB) from Korea, a SurfSea from a place in Brisbane, over the internet. It is an aluminium-floored inflatable and was cheap …. very cheap. About a third the cost of most established brands, we took the plunge thinking if it died after a year or two we could just get a new one again and still be better off financially.

Its first leak, around the valve, appeared about six months ago but the shop we bought it from had now vanished and we were now in Thailand, so getting a fresh new one of the same brand was not an option.

The local dinghy repair shops were not keen to attempt repair as it was made of PVC. They suggested bunging the leak with sealant. This was partially effective. It left a slow leak and we got by quite well with a regular morning pump up that would usually last us the day.

Then the boat was left for six months and, being left on the deck (covered) in the Asian heat, did it no favours. The cover I used fell to pieces on removing it!

On its second day of use the morning pump session was finished by a large death sigh as a large hole in one of the seams pulled apart and the plastic sides hung limply off the aluminium base. This dinghy was no longer worth conventional repair, but I had heard of an unconventional fix that might bring it back to life: fill it with expanding foam.

With nothing to lose I thought I would give it a go, even it only lasted the next three months we planned to be cruising this season.

A little internet research taught me marine foam is closed-cell to keep it from getting waterlogged and I found a company in the US that sold the two pack product that did not seem too expensive. However, because of the chemicals involved, it could only be shipped: no airmail. I did not have time for this so settled for normal builders expanding foam that you can buy from hardware shops in a can.

I was now in Langkawi and able to find a couple of shops stocking this, either PU foam (V-teck) or Sika Boom AP, so got a few cans to start. They were about AU$10 each but the PU foam cans were bigger.

The big hole in the dinghy meant I already had good access to start, so hung the dinghy off a jib pole to keep it off the deck and so that the foam could settle with gravity into the aft tube ends. This particular dinghy has big tubes which is great for keeping dry on the water, but would mean I would need more foam than usual. Some basic calculations made me think a few cans should fill up half one side.

Clutching the can and sticking my arm into the hole, I pressed the trigger and directed the flow of foam downwards. The can finished quicker than I expected and I peered in to see how it faired. The foam sat at the foot of the tube like a disappointing cow pat, barely reaching the sides. Either my maths was off or the company was hugely exaggerating how much this foam would expand.

The second can was an equal let down. At this rate it would cost me a fortune to fill the dinghy!

Malaysia and Thailand have many beautiful beaches but unfortunately the high waterline is nearly always strewn with litter washed ashore, even in national parks.

Much of this is plastic bottles and polystyrene chunks, due to their buoyancy which is just what I needed. Why not fill the dinghy with this free discarded flotsam and, at the same time, I would be doing my little environmental bit to clean some beaches …. win/win!

I bought some more expanding foam as I needed this to fill the gaps and gel the pieces together. In the end I bought about 15 cans.

Then off for a few days out of the marina to some nearby islands that had beaches facing the predominant NE wind and it was not hard to fill four large black bin liners. I chose polystyrene that was fairly clean and not ingrained with pebbles and sand and bottles that did not look too UV damaged and tested they could still hold air well.

Back at the marina with my haul, I strung up the dinghy again and washed the salt and sand off the rubbish. I did not need to let it dry as, apparently, dampness helps activate the foam.

So the rubbish was dropped in and, when within hands reach, I was able to squeeze the pieces into a tight fit. The bottles filled in gaps in the middle of the tube quite well as they were partially compressible. I did not want them on the outside as the constant crinkle sound could be an annoying seat.

Every foot or so I would use a can of foam to fill the gaps, especially on the edge of the tubes as I hoped this would fill out against the PVC and give it more of its original rounded shape. The foam would set and hold the pieces in place.

This was going well until I reached the access hole and used too much rubbish or foam before thinking about closing it up. The materials bulged out of the hole and I could not bring the edges together. Not a huge problem as it was on the inside of the dinghy so should not get too wet and the foam is still relatively water resistant.

I did not like how it looked however, so I cut away some of the foam to allow me to pull the edges together to glue. I could not get hold of any PVC glue at the time so made do with some ‘Tough as nails’ I had open already. This lasted about five minutes!

I had left the chamber divide wall in place but this was a mistake as it left a large groove in the tube where I had not been able to compress the foam pieces together. When I opened up the other tube I cut this divide out.

It really is better to make the holes not too far apart so that the pieces could be placed tightly and the canned foam directed accurately. I had two holes up both sides and then one at the top (bow) but I think three up the sides may have been better.

Of course this means more holes to close.

When it came to closing the holes, I could have got proper PVC glue but it is very expensive to buy good stuff in Asia. It is also hard to use with pressure on the glued edges so a tight closure would not be possible. I decided to sow it shut. I leant the dinghy into a more horizontal position and stitched the hole from both sides of the hole toward its middle, using an old sail repair kit as it can be pretty tough pushing the needle through the PVC.

I left it loose as I crammed in my last few small pieces of polystyrene. Then squirted in a can of expanding foam into the gaps and around the opening itself.

Quickly, while it was still expanding, I pulled the strings of my stitching tight and tied it off. This way the foam would expand up against the closed hole and hopefully act as a watertight adhesive.

It was finished and unless the tubes separate from the aluminium floor, unsinkable.

It was not pretty and the rough stitching earned it the name ‘Frankenstein’. We considered painting it green, with some large bolts on either side.

It floated well, was stable and I was able to get it up on the plane with the same weight on board as it used to have, about 180 kilograms of body weight. Just not forgiving on the buttocks.

A friend helping me theorised its now uneven, firmer surface may help it travel faster, much akin to a golf ball, but I am not convinced.

Other advantages became apparent: unsinkable as I said; no fear of puncturing on rocks, which is a real concern if visiting the caves in Thailand or dodgy docks and, with no give on the tubes, she rested more solidly on the transom hanging on the davits.

I did later find she was taking on water inside the tubes, probably as an outside seam gave way in the process. So she eventually became heavy and less easy to get on the plane and drag up beaches.

One tube had another hole so was able to drain when lifted but one did not so she became very unbalanced on the davits. I chose to make a small hole on the inside of this tube, which drained water into the dinghy and then out the transom drain hole, which we un-bung when lifting it on the davits.

So far, it has lasted almost three months. It will never be as light as it used to be for getting on the plane and dragging up beaches, but otherwise very useable and virtually indestructable.

There is something to be said for not having pretty, precious equipment, it takes the worry out of looking after it.