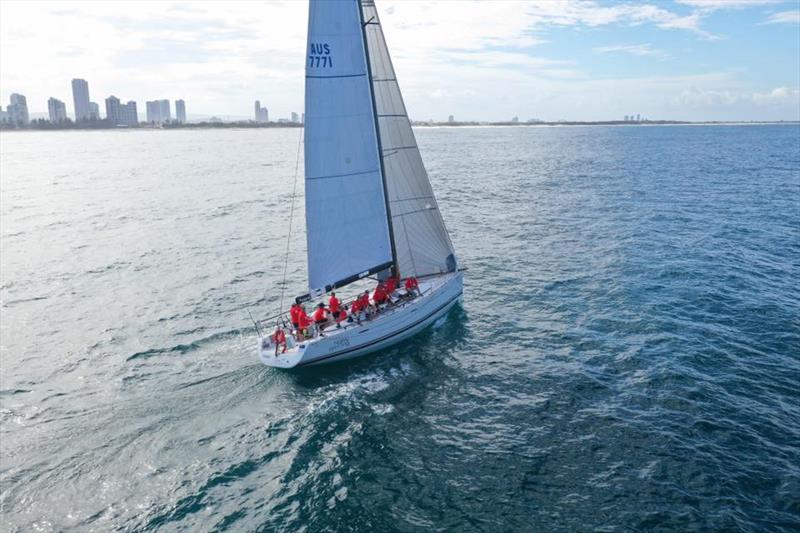 New entrant to yacht racing, Mark Spring, has sprung into action in his first major ocean race by taking overall wins in all categories (IRC, ORCI, PHS) in the Club Marine Pittwater to Paradise racing, finishing on the Gold Coast and hosted by RPAYC in early January.

Whilst Mark is not new to sailing, having owned the Jeanneau 49 ‘The Dish’, he has only recently begun ocean racing – and the Middle Harbour Yacht Club (MHYC) member won on his first go with his aptly named Beneteau 45, ‘Highly Sprung’, which was previously owned by Paul Clitheroe and raced as Balance.

Following a stint in Asia, Highly Sprung has been brought up to race trim by Spring, with the assistance of long time MHYC member and AW Marine’s Andrew Pearson. The pair identified the boat as one that would suit them in their start on the racing circuit, “So we bought it,” Spring said. “And while we’re learning the ropes, it’s not a bad start.”

“While upwind the whole way, the race was somewhat of a baptism for us,” Spring said of the conditions with winds ranging from 4-30 knots.

“She went well and lived up to expectations as a proven upwind boat.”

“The guys have been great and assisted us greatly. We’ve learned what the boat can do and how to do it,” Spring acknowledged.

While crew member Andrew Pearson commented: “We need new owners like Mark in yacht racing. He and the guys are eager to learn and a fun bunch with the right attitude.

“Mark is a great owner/skipper, and whilst new at racing, understands the priorities of safety, fun and competition. We saw this as a great learning exercise for his crew and I was lucky to sail with some old mates who are fantastic sailors.

“We simply sailed a smart race, out of the current and in breeze. Overall, we sailed the least number of miles of the fleet. Being in the surf line was paramount, but can be nerve-racking at times.

“It wasn’t an easy race and it was quite a long one. Winds got up to 30 knots on the nose, and after Seal Rocks, there was nothing but rock-hopping. There were quite a few retirements,” Pearson ended.

Spring and Pearson said they were also pleased to be able to take young MHYC member and Frank Likely trust recipient, Leo McAllister, on his first ocean race.