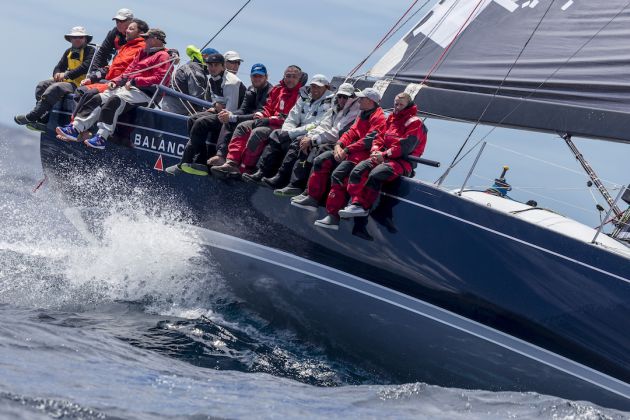 Midnight Rambler, the Ker 40 owned by the partnership of Ed Psaltis, Michael Bencsik and Bob Thomas, finished second overall, 20 minutes short of Balance’s corrected time, while Mick Martin produced one of his best results to-date, sailing his TP52 Frantic to third place overall. The two boats also finished second and third respectively under ORCi, and also in PHS, but in the reverse order.

The IRC overall results from this race translate to Midnight Rambler holding onto her series lead, with Julian Farren-Price’s defending champion, About Time, three points off the money. Balance is third, but 14 points adrift of the leader.

Clitheroe has been making hay since winning the Sydney Hobart in December, which in turn led to his being crowned the CYCA’s 2015 Blue Water Pointscore champion. However, he was not aboard for this triumph, instead attending a wedding.

“This was the subject of some debate at home – on ‘balance’ I chose to stay married versus the divorce potential of the Newcastle race!! I’m just back from a two-week boys' trip to the USA, so the wedding was a good call,” Clitheroe commented with his usual humour. But he could not resist watching the 10am Sydney Harbour start from a rubber duck. “Greenie and the guys did a great job.”

As in the past, the financial guru left his boat in the experienced hands of his regular sailing master Mike ‘Greenie’ Green, a veteran of 37 Sydney Hobarts, along with the usual Balance crew.

“A magnificent race. A great ride and a great result,” Green said. “I don’t think the boat did less than 14 knots the whole way. We sailed the shifts. There were two slight shifts and we took advantage of them,” he said of the wind that varied between 160, 190 and 200 degrees.

Green said there was more east in the breeze offshore, and west inshore, so they headed out. “We put in five or six gybes on the way up, but the first hour to hour and a half, the breeze did not shift at all,” he said.

At the top end, the wind reached 29 knots and Green said Balance reached a maximum speed of 24.5 knots.

“Off Newcastle, the seas were quite steep. We buried the bow at one stage and I wasn’t sure the two guys would still be there when it came up again,” Green recalled.

“We had a lovely 24 hours of sailing. We waited in Newcastle until the breeze eased, and sailed back to Sydney in a very pleasant east-south-easterly, travelling at a fairly constant 10 knots.”

Principal Race Officer Denis Thompson said the 14 boats started in a 15-18 knot southerly and quickly made it out of Sydney Heads. “Offshore, the wind was at 20-25 knots. Balance was flying. I wouldn’t be surprised if it broke the record,” he said earlier in the day.

The race was a far cry from last year’s version, in which not one yacht finished within the time frame allocated. It was particularly frustrating for the crew of Balance, who came within five minutes of being the only finisher. However, this year’s result more than makes up for it.

The deciding race of the Ocean Pointscore Series is the Sydney Wollongong Race, starting on 19 March at 10am.