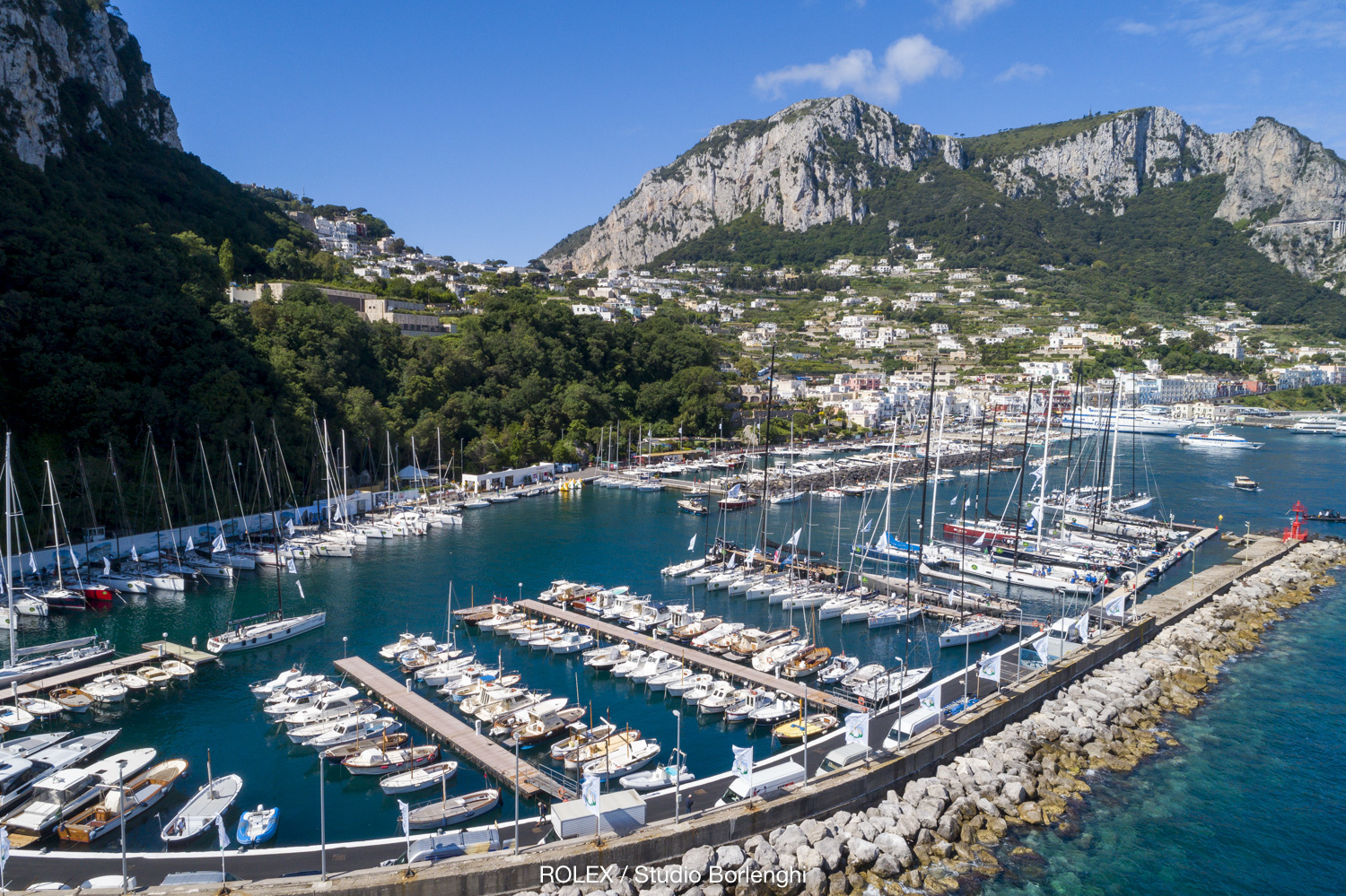 The Marina at Capri's Marina Grande where the schooners will be moored. Photo: ROLEX / Studio Borlenghi.

Following the founding of the International Schooner Association (ISA) at a meeting during last September’s Regates Royales in Cannes, so the first ever event purely for classic schooners will take place off Capri in May.

The ISA, the Circolo del Remo e della Vela Italia and the Yacht Club Capri, with the support of the International Maxi Association (IMA), have launched the Capri Classica which will take place over 8-12 May, just before Capri Rolex Sailing Week.

This new regatta will see some of the largest classic yachts competing in an event with a unique format, specifically tailored to classic schooners. Race starts from anchor, staggered starts, race courses optimised for the peculiarities of the classic schooner sailing – these are just some of the new features to be introduced by the organisers plus the team from The Classic Yacht Experience (TCYE), a company created by like-minded individuals, passionate about schooners and with the desire to promote yachting’s purest and most traditional format.

The Capri Classica will be the first round of the International Schooner Association’s 2019 Schooner Cup Series. The other two events in this series will be Monaco Classic Week (11-15 September) and Les Voiles de Saint Tropez (26 September- 6 October), at the end of the Mediterranean summer season.

These three events will be held in perfect venues for classic schooners:

Capri, with its own dramatic terrain, plus the surrounding jewels of the Sorrento and Neapolitan coasts, with Mount Vesuvius in the distance, provide the perfect canvas for the new racing season for traditional schooners to get underway. May also is the ideal month to enjoy the colour and atmosphere of Capri at its best, before the tourist season begins and this sensational island becomes overcrowded.

Monte Carlo – that most elegant location on the French Riviera – will host the second round of the Schooner Cup Series, during Monaco Classic Week in September. This could not come at a better moment as this year the Principality of Monaco will celebrate the ‘sailing traditions of the United States of America', of which schooners are a vital part.

Of course, in 1851 the USA also won the legendary 100 Guineas Cup against the Royal Yacht Squadron aboard the schooner America, the trophy going on to become the most prestigious trophy in sailing: The America’s Cup.

Saint Tropez, where all yachts gather to bid farewell to the summer

Les Voiles de Saint Tropez is universally considered to be the premier annual regatta of the French Riviera. For competitors and spectators alike it provides the unique opportunity to see the world’s top yachts, both modern and classic, sailing together and enjoying the sea, at the conclusion of the Mediterranean season.

Following this final round, the International Schooner Association will crown its first winner of its annual Schooner Cup Series.

Tomas de Vargas Machuca, the President of the International Schooner Association said: “It’s a great honour to be representing the interests of owners, captains and crews of these wonderful yachts. After all, we are only custodians of them during our lifetime. Going forward, the ISA plans to offer a platform that will help all things schooner and attract other owners to compete and negotiate similar challenges through one united voice. The Capri Classica and the wider Schooner Cup Series will hopefully represent just the beginning of a fertile future for classic schooners.”

Andrew McIrvine, Secretary General of the International Maxi Assocation added: “The IMA is delighted to be supporting the first regatta designed solely for classic schooners and the inaugural event for the International Schooner Association. Our stated aim is to stimulate and support all forms of maxi yacht racing. We look forward to continuing our affiliation through the next events in their series in Monaco and Saint-Tropez.”