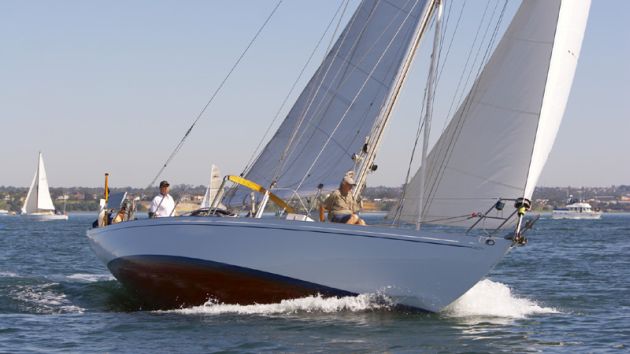 There is many a fine lady who won’t reveal their age under any circumstances, but for SeaLink Magnetic Island Race Week entry Fair Winds, she outwardly wears her age with pride. Fair Wind celebrates her 60th birthday this year as she travels north from Melbourne to compete in the northern Queensland winter events including the 10th anniversary Magnetic Island regatta which runs from September 1 to 6.

Owner Mark Chew from Royal Yacht Club of Victoria says the 43-foot timber yacht was built for an American client by Abeking and Rasmussen in Germany in 1956 and has crossed the Atlantic four times, and the Pacific at least once. “I bought her in Auckland in 2004 and then sailed her back to her home port of Melbourne,” he said.

Under the stewardship of Chew, Fair Winds has accumulated a lot of sea miles in the last 10 years, sailing back to New Zealand, across to New Caledonia, down to Hobart and made numerous passages up and down the east coast of Australia. Chew has also raced her in classic yacht events in New Zealand, NSW, Queensland and Victoria.

“Lots of people have said that Magnetic is more our team’s style of things,” Chew said about deciding to enter the regatta for the first time.

Fair Winds is raced by a group of Chew’s friends from Melbourne that all put in to help run the classic yacht. “In a way, the sailing is more important than the win, although we try pretty hard to win.”

All the crew are wooden boat sailors. But, when they are not racing Fair Winds, quite a few them race on the Cookson 12m, A Cunning Plan.  “We did Sydney Hobart (2014) on it and we may be doing it again this year,” Chew said.

While A Cunning Plan and Fair Winds are roughly the same length, that is about where their similarities end. “They are the most different boats you could possibly imagine. The Cookson weighs about four tons and Fair Winds about 14 tons. And it is almost 50 years of technology design difference between them,” Chew said. “We sail with a different attitude on Fair Winds. We still go quite hard, but it is the simplest form of sailing. The Cookson has the latest B&G 5000 for example, where on Fair Winds you are relying more on yourself than technology.”

Entry to all classes is open at http://www.magneticislandraceweek.com.au/