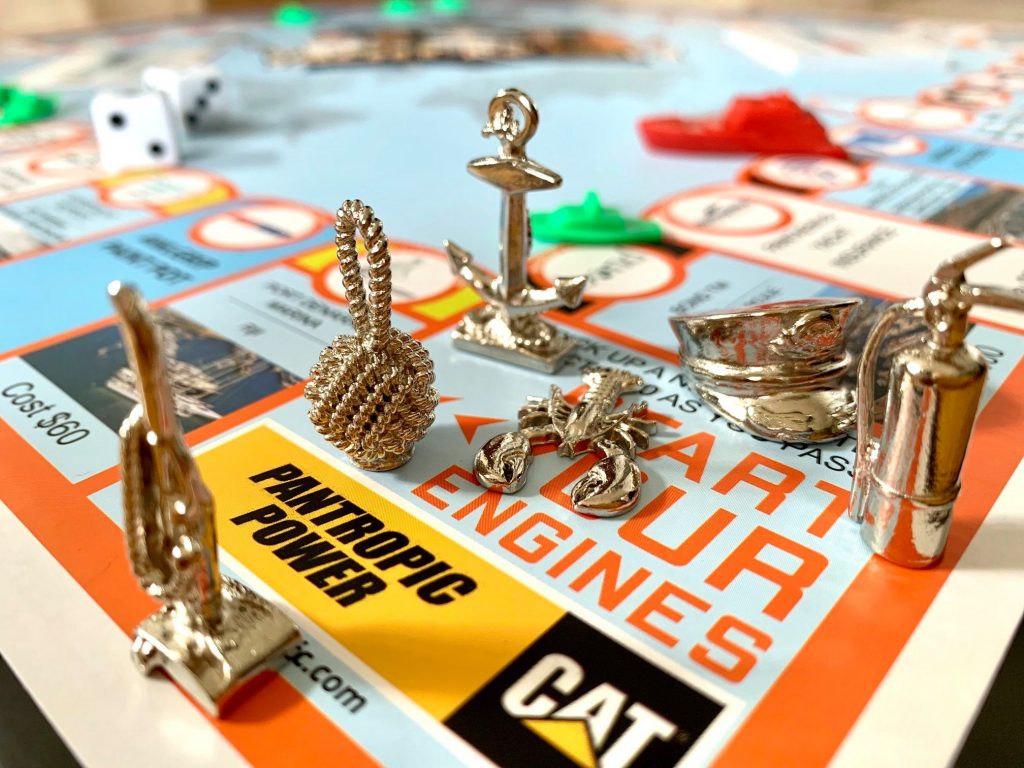 The Triton. Story and photos by Dorie Cox.

Chief Stew Paulina Costa is careful with her money, but fairly risk-tolerant. She likes to buy houses and hotels for each of her properties – in the game Monopoly, that is.

“Not too much out, but not too much in the bank,” Costa said from onboard M/Y Pepper XIII, a 125-foot Westport, during opening day of the Fort Lauderdale International Boat Show. She plans to use the same strategy when the crew plays Yacht-opoly.

The new board game is the idea of former first officer Tony Ryan Stout and his team at YachtNeeds, a crew connection app company. He produced the yacht-themed version of the popular game using his experience and connections on yachts including M/Y Ecureuil, an 82-foot (25m) Princess; M/Y DB9, a 197-foot (60m) Palmer Johnson,and M/Y Zoom, Zoom, Zoom, a 60m Trinity.

Longtime players of the original game may remember the battleship, boot, cannon, thimble, and top hat metal playing pieces. As a kid, Stout always chose the car. The yacht version features a tiny metal vacuum cleaner, an anchor, a captain’s cap, a fire extinguisher, a monkey’s fist and a lobster.

“There it is, a metal part for each department. But we probably should have added a wrench,” Stout said at the company’s booth in the American Pavilion in the show.

On the bills are photos of Lürssen motor yachts Oasis, Aurora, Areti, Lady Lara, Radiant, Dilbar, and Azzam. When the roll of the dice moves a player, they now land on marinas and businesses from around the Mediterranean, the South Pacific, the Caribbean and the United States.

The board’s first square begins with “You pick up a new charter, collect $200 as you pass. Start your engines.” And the corner where players’ pieces were held in jail is now labeled “Dismasted, drift to marooned”.

The rules include yacht-centered themes such as: “Select a crew member who you actually trust to be a banker,” “The last sailor left in the game wins,” and “The richest sailor wins”.

Stout said the “Chance” cards are the most fun and many ideas were submitted by yacht crew. The cards include such scenarios as: “The boss’s son raids the galley after a night out with his friend. He finds the stew’s sweet cupboard and smashes down a peanut slab. Unfortunately, he has a severe nut allergy. Administer an adrenalin (epinephrine) injection straight away, update existing medical kids on board. Pay $100.”

And one of the YachtNeeds team’s favorites: “Owner’s wife falls off the passerelle while posing with her chihuahua. … And instantly demands he buy a new and improved one.”

Read the ful story at The Triton.