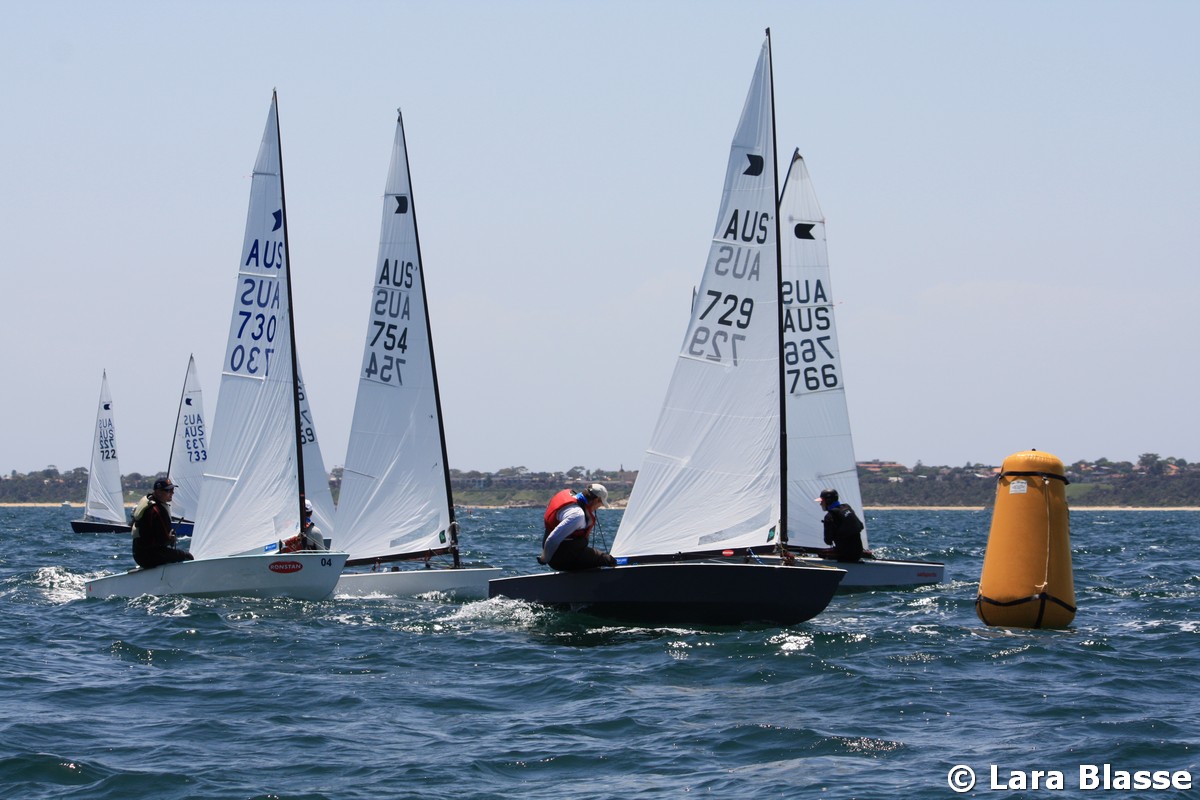 Black Rock finally turned it on for Day 3 of the OK Dinghy Australian National Championship, with brilliant sunshine and a building sea breeze producing great conditions for the 40-boat fleet. After two more races, Roger Blasse takes an eight-point lead into Tuesday’s lay day, from Mark Jackson. Tim Davies is a further five points back after moving up to third. The race wins went to Blasse and Jackson.

With the sun out in Melbourne, the Black Rock sea breeze came in on schedule. The first race of the day, Race 5 of the series, was attempted again under ‘P’ flag with the now predictable result of a general recall. The fleet then got away under ‘U’ with the breeze in the south-west at 10 to 12 knots. The leading boats got away at the pin end and benefitted from left pressure and a left hand shift.

Tim Davies, AUS 779, was first around, followed by James Beavis, AUS 778, Michael Horvarth, AUS 744, Brent Williams, AUS 754, Peter Robinson, AUS 774, with Roger Blasse, AUS 749, in the chasing pack. However, by the gybe mark Blasse had stormed through to take the lead from Davies.

With the breeze oscillating between 10 and 20 degrees, there were plenty of opportunities to make gains, but also to lose out. Blasse cleared out at the top of the second beat to have a comfortable lead down the run. The other places started to mix up at the top of the beat and on the run, with Davies holding second, Beavis third and Horvarth fourth. Andre Blasse, AUS 729, Robinson and Michael Williams, AUS 730, were both close by, Mark Jackson, AUS 768, had a quick run and rounded the last leeward mark in third only to sail out of a pressure lane and drop back to fifth, being passed by Beavis and Horvarth. Glenn Williams, AUS 719, crossed in sixth.

The second race got underway under ‘U’ with the wind at 190 and 12 to 15 knots. Jackson and Davies tested the RO's eyesight at the pin, both getting the benefit of the doubt, while Roger Blasse was four boats up from the pin. The leading boats headed left, included Beavis, showing great height and speed in his Ovington hull.

Davies rounded first, followed by Mike Williams, Brent Williams and Beavis. Jackson was fifth round. By the gybe mark it was Davies just in front of Jackson and Roger Blasse. Beavis then had the big Oh No! moment as he rolled into windward just before the gybe. The Black Rock sea breeze and waves were starting to build and Jackson led round the first triangle, with Davies in second and Blasse in third. Jackson then covered Davies through the middle of the course on the second upwind, while Blasse went left with Mike Williams. The breeze veered right and Jackson rounded the windward mark with a comfortable lead over Davies and Blasse, going on to finish in that order.

Six-time champion, Jackson, becomes the first sailor to take a race off the championship leader, Roger Blasse, so far this week.

“I had a frustrating first race. I seemed to be on the wrong side of each work, but I had good speed and enjoyed the downwinds. I worked hard to get back to third at the end of the run after being very deep early in the race. I then let two boats through on the beat to finish.”

“In the second race I was determined to stay in touch with the leaders and had a good start at the pin. I was in good shape at the top mark and had good speed on the reaches. I was lucky to get a right hand shift on the second beat and was able to hold on from there.”

On the remaining races, “Roger is sailing very well and will be hard to beat. Tim is quick and sailing very consistently. The next two days are forecast for a strong Black Rock sea breeze and I am looking forward to some great sailing conditions to finish. It’s great to be back sailing at Black Rock.”

Blasse has now won five out of the six races and is looking like he has put in some practice ahead of these championships and the upcoming world championship in New Zealand in February. He has certainly put a target on his back so far and seems likely to be heading for a record 11th title.

“Today the wind stabilised a bit so we could all get a bit of a better judge on our boat speed. It was a classic Black Rock day with the breeze slowly filling over the two races to a healthy 16 knots, lots of sunshine and great waves to boot. The close racing was classic OK Dinghy with small shifts making all the difference”

“Back at the bar there were plenty of smiles with everyone reflecting on a great day’s sailing.”

Peter Robinson is back in the boat after recovering from injury.

“It’s nice to be back in the boat after injury and I’m on a short programme going into the worlds. With little preparation I’m happy that I’ve been able to find reasonable form again.”

“The weather has defied the forecasts with nice, steady building breezes each day and characteristic Black Rock conditions. The starts have been keenly contested with many general recalls and it’s great practice for the upcoming Worlds. There are enough shifts out there to gain, and lose, places and there’s great competition throughout the fleet.”

With six races down, the championship is running to schedule and the fleet now has the additional challenge of surviving the famous Black Rock YC New Year’s Eve party, before a lay day on New Year’s Day.

The fleet returns to the water on Wednesday, before concluding on Thursday with a possible four more races to decide the 2019 Australian OK Dinghy Champion.