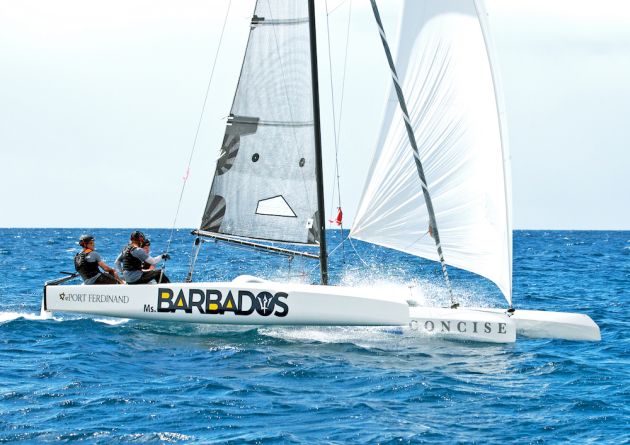 Bridgetown, Barbados (18 January, 2016): Day 2 of the 80th anniversary Mount Gay Round Barbados Race Series, organised by Barbados Cruising Club in association with Barbados Tourism Marketing Inc, and Mount Gay, served up the sort of conditions that the island of Barbados is known for – good winds and just enough of swell to keep the racing exciting.

The second day is traditionally the 2 Restaurants race with turning marks of the course laid just off two of the most popular restaurants on the island – The Beach House Bar and Restaurant on the west coast, and Tapas Restaurant on the south coast. For this 20+ nautical mile race, the sparkling, lively conditions couldn’t have been better.

With winds that reached 20+ knots, there were plenty of thrills and spills particularly on the tight reach along the west coast where many pushed the limits with the temptation to hold the kite just a fraction too long.

Although the J/24 fleet raced three of four windward/leeward races within Carlisle Bay, the fourth race – in the windiest conditions of the day – took the fleet on an 11-mile sprint round Needhams Point to Tapas Restaurant mark. Racing in this class was, once again, extremely close throughout. Robert Povey and team on Hawkeye started the day with a good win in race one but it was Robbie Yearwood and team on Island Water World Die Hard who sailed consistently and won the day. With two more first places to add to two from yesterday, Team Island Water World Die Hard now lead overall with one day to go.

Commenting on his success on the racecourse, Yearwood said: “Undoubtedly our win was down to good crew work. They have been sailing together for a very long time and today they demonstrated their ability to be able to change gear quickly. They also have the ability to leave things behind if things go wrong rather than dwelling on them.”

Peter Lewis and team on Whistler (J/105) enjoyed another win in CSA Division, while Conviction (TP52) took a commendable second place, which leaves her firmly in second place overall. Clint Brooks, whose team represents the Barbados Offshore Sailing Syndicate (BOSS) – a local project that promotes youth in sailing – commented. “We had a fantastic time and the team of youngster which range from 14-17 years old just love this sort of sailing weather. Today we clocked 20kts of boat speed, so it was full on. The youngsters train regularly on the boat but this sort of racing is the perfect training ground for our forthcoming race season. To finish second today is a great achievement. After this event we’re off to Grenada Week, then competing in the Caribbean 600.”

With a first place to add to a second place yesterday, David Spieler and team on the Beneteau Oceanis 473 – Leonora – are now overnight leaders of CSA Cruising Class, while Priscilla Richardson and team on Tropic Bird (Hunter 35) lead the way in Non CSA (Local Rating) class. The Blue Peter, the beautiful Alfred Milne classic that won class yesterday finished seventh today, which leaves her in third overall, just one place astern of the Canadian-registered Jeanneau Attalia 32 – Waymar.

Commenting on Tropic Bird’s win and overall lead, Michael Brown, tactician, said: “We had a fantastic race and it was a perfect day for sailing in Barbados with 15-20kts all day. To be honest we are out there for the fun of it and today we just happened to win.”

The battle of the Multihull fleet continues between Bryn Palmer and team on the RC30 catamaran Silver Bullet and Team Concise 12 on the Diam 24 trimaran. The conditions really gave both teams a chance to put these super-fast multihulls through their paces. Each had a turn at the front of the fleet as they blasted along the coast but in the end it was Team Concise that won the day.

Commenting on their win, Jack Trigger said: “It is fantastic to race against Silver Bullet because they are such different boats but we seem to be racing well together. Today was windier than we expected but really exciting particularly in the big swell. The boat likes to put her nose down so it is always pretty wet and fast. Sailing here is idyllic, the perfect place. In a boat like our where you are wet the whole time it is so great not to feel cold. We have been here training on the MOD70 for over a month now and to get 20 kts of Trade wind every day and flat water along the coast is certainly the best sailing I’ve ever done.”

Palmer, who suffered some gear problems on Silver Bullet today, including a split spinnaker, spoke positively about the racing. “It was great to have such good competition again. A bit of mark confusion, which led us to regain the lead on an unprepared spinnaker leg, however, resulted in us going shrimping with our spinnaker. That was game over for us. We did finish but ended up trailing Concise 12 by a good distance in the end.”

Tomorrow’s it is the final day of racing in the Coastal Series with one race remaining in all classes except the J/24 class where another four races are scheduled.