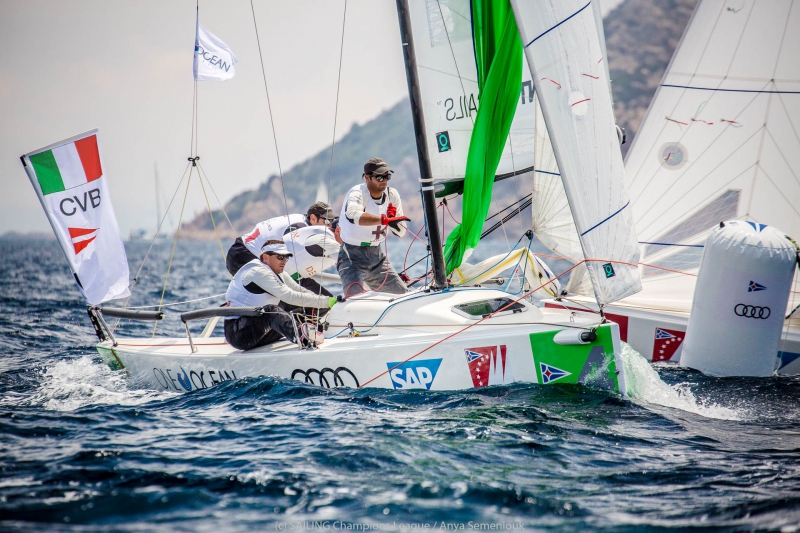 Porto Cervo, Italy: At the conclusion of the third day of racing, the Italian team representing Circolo della Vela Bari leads the provisional classification at the One Ocean Sailing Champions League.

Tomorrow will be the final day for the 24 teams from all over Europe to earn points and define the seven crews that will take part in the final in August, in St. Moritz. The event is organised by the YCCS with the support of the main partner Audi and in partnership with the One Ocean Foundation.

Once again, teams gathered punctually at 10am off Porto Cervo to kick-start the penultimate day of competition, accompanied by a sirocco wind blowing at 10 knots. A further 12 races were held and 13 flights have now been completed. Two more flights (six races) are scheduled for tomorrow to complete the maximum 15 flights scheduled for the regatta.

Proving that consistency pays, the team representing Circolo della Vela Bari – who sat in fourth place after the first day – climbed the provisional rankings to claim top place overall thanks to two victories and two second places today. The Regattaclub Bodensee is just two points behind in second, while holding firm in third is the German team of the Verein Seglerhaus am Wannsee.

Simone Ferrarese, helmsman for Circolo della Vela Bari, commented: “Today's conditions were good as is usual in Porto Cervo and the guys did a good job. Now we're preparing for tomorrow, our goal is to get to the finals and to be ready for St. Moritz.”

The question of the day on the topic of sustainability, which has been a feature of the entire event held in the name of the One Ocean Foundation, was: “As a sailor, how important is the protection of the oceans for you?”

Atle Dreng of Norway's Larvik Seilforening responded: “I think it is crucial that companies, sailors and people around the world pay attention to the problem of plastic pollution.”

The mission of the One Ocean Foundation is to promote the protection of marine environments by raising awareness among international leaders, institutions, companies and the general public of a sustainable culture. Dreng went on to say: “We all need to be aware of how much we are dependent on the state of health of our planet.”

After a busy day at sea the teams will gather at YCCS for the Team BBQ Dinner where they will be asked to reflect on the theme of safeguarding the sea as they watch the first video created by the One Ocean Foundation, followed by a video specially made for the regatta, focusing on the theme of sustainability.

Tomorrow morning the teams will meet in Piazza Azzurra at 10 a.m. for the Skippers' Briefing and the first starting signal is scheduled for 11 a.m. with north-easterly winds of 10-15 knots forecast. The Prize Giving Ceremony to announce the winners will be held at 4.30pm.

Quantum Sails and Garmin Marine are technical partners of the event.

Full results and all information: https://www.sapsailing.com/gwt/Home.html#StartPlace:null