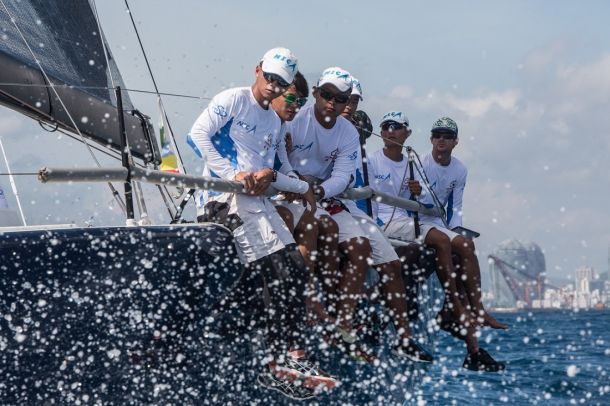 Crew on the rail of Ark 323. Photo Miguel Toran

Mainland China will make its debut in the 71st edition of the Cruising Yacht Club of Australia’s Rolex Sydney Hobart Yacht Race, joining two other internationals and 14 Australians who were quick in signing up after entry opened last Friday.

Serena Cai, who is managing the Chinese yacht, Ark323, said the Chinese team could not wait to put their entry in, aware the race had attracted entries from Hong Kong in the past, but never from mainland China and never with a full Chinese crew.

Cai said today: “Ark323 is a purely Chinese entry; a Chinese owner, crew and administrators. The yacht is representing Noah Sailing Club in Shanghai, but we do have a coach from New Zealand. The boat is owned by Noah’s Group, which is led by Wilson Lee and sponsored by E-commerce company Nuoego.com.”

Lee, a Chinese businessman who lived in Australia for a time, said, “We made a decision to enter the Rolex Sydney Hobart because of the nature of the prestigious event, the challenge it presents. It is also one of the ultimate platforms to showcase the Chinese team and the club’s passion to increase a Chinese presence at international yachting events.”

The team consists of 12 male sailors, drawn from the best the country has to offer. They come from all points of China and have a wide range of sailing skills. Training together since March, Serena Cai says, “They are very excited to be the first crew from mainland China to enter the race.”

To be skippered by Robert Hielkema, Ark323 is a TP52, best known under her previous identities of ‘Sled’ and ‘Warpath’. She will be sailed to Australia from Sanya, where Australian Genevieve White is currently helping prepare the boat’s safety equipment and supervising marine safety training.

Colin Buffin is the owner of Uxorious IV, a Swan 62 FD. He says: “We have been slowly, very slowly, sailing around the world. We left the UK in October 2011 and we are currently in Fiji. We should be in Sydney by mid-October.”

During their travels, Buffin and crew have contested the Cowes Dinard and Rolex Fastnet races, the 2011 Swan Europeans and then sailed across the Atlantic for the 2012 Caribbean 600.

“We were second in class at the Europeans, beaten by Clem, another Swan, by 21 seconds on corrected time after a three day race. Seconds count even on a long distance race,” Buffin said.

“The boat went back across the Atlantic in May 2014 for the Swan Worlds in Sardinia. We left St Lucia in February and have been making our way to Sydney since then,” he said of their voyage on Uxorious IV, a British registered boat with an all-British crew, the core of which has been together since 2011.

“Two of the crew, Ed Hill and Chris Noble, have competed in the Sydney Hobart before, so we have some idea of what to expect,” commented Buffin, who says that after the race, they plan sail back to the UK via Cape Town.

The third international is the bright red Haspa Hamburg, a JV52 from the Judel/Vrolijk stable and built by Hakes Marine in New Zealand. A German campaign, it is supported by Hamburg’s Haspa Bank in Germany.

The boat will be skippered by Johan Schultz, a sailor in his mid-twenties. It fits the brief of the boat’s owner, Hamburg Verein Seafaring, whose focus is to give young sailors an opportunity to sail and race offshore. To prepare, the crew recently contested the Round Bornholm Race in the Baltic Sea.

The start of the Rolex Sydney Hobart Yacht Race will be broadcast live on the Seven Network throughout Australia, webcast live to a global audience on Yahoo!7 and live streamed via mobile.

The 2015 Rolex Sydney Hobart Yacht Race entry and Notice of Race are now online at: http://www.rolexsydneyhobart.com/competitors/online-race-entry/.