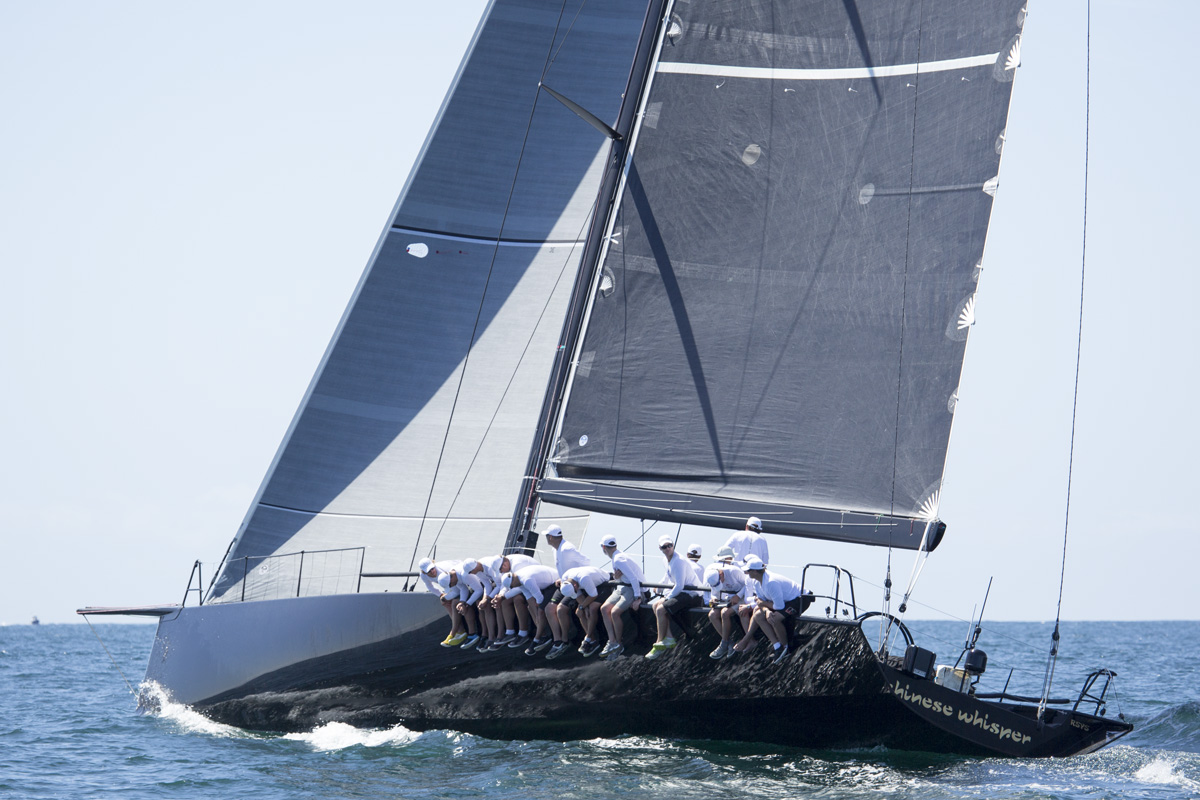 Rupert Henry’s Chinese Whisper has taken the double of line and overall honours in the Cruising Yacht Club of Australia’s Bird Island Race and in the process has also taken charge of the Club’s prestigious Blue Water Pointscore.

Balance, Paul Clitheroe’s TP52, the leader of the BWPS coming into this race, finished seventh overall, dropping to second place in the six-race series, the outcome of which will be decided by the Rolex Sydney Hobart Yacht Race.

Henry’s yacht led the 85 nautical mile race from the get go, while Allen, who for this race traded his Carkeek 60 for his TP52 as he ponders which of the two yachts he will take to Hobart, sailed an impressive race, outclassing the other four TP52’s entered.

“We’re finally learning to drive the boat at all the different angles,” a happy Henry said this morning.  “We made mistakes early on – a new boat and a new crew – it is to be expected.

“We put a lot of planning and manoeuvres into this race, so it’s nice to see it pay off,” he said.

“It was glorious sailing. It was so clear; we had a magnificent view of the coastline. The long upwind leg was good for us. It gave us the chance to stretch our legs. We had around half an hour on Ichi Ban and Brindabella (the two finished 19 minutes apart),” said Henry, who feared Brindabella might beat them to the Heads when the older boat took a dig into Watsons Bay.

Henry, who had almost his full Hobart crew aboard, admitted it was beneficial to race against an expanded fleet.

“It was good to see Indian (Craig Carter’s Carkeek 47 from Western Australia), Frantic (Mick Martin’s TP52 from Lake Macquarie) and Helsal 3 (the Tasmanian boat owned by Rob Fisher and Paul Mara) in the race. It created a nice atmosphere at the Club beforehand too, with a few more people and boats,” he said.

Five of the 10 TP52’s entered in the Rolex Sydney Hobart seized the opportunity to take stock of their in-house competition. There was less than one minute overall between Celestial and Ragamuffin 52. Owned by Syd Fischer, but skippered by his grandson Brenton for this and the subsequent Hobart race, it was Ragamuffin 52’s first race this season, so fourth place overall was impressive.

Principal Race Officer, Denis Thompson said there was no breeze at all on Sydney Harbour at the appointed start time of 10am yesterday morning, so he delayed for 10 minutes until a 5-6 knot north-easterly breeze filtered up to the Point Piper start area.

As the fleet sailed down the Harbour, some, including Paul Clitheroe’s TP52 Balance and Shane Kearns’ S&S34, Quikpoint Azzurro, took a quick dig to the east as they watched those in front of them lose height and fall away towards the western shore. Fortunately the breeze picked up and it was not long before the fleet had left the Harbour and turned left for Bird Island near Budgewoi on the Central Coast.

Brad Kellett reported from Brindabella: “The upwind leg out of the Harbour was a close race, with Chinese Whisper, Brindabella and Triton (Michael Cranitch/David Gotze) close together. The military exclusion zone caught everyone off-guard, so we had to sail around that.”

Heading up the coast, Kellett said, “The fleet has formed into a line, one and a half miles behind Chinese Whisper and about eight miles from Bird Island. Ichi Ban is about two miles behind us with Triton just behind them. There’s around 15-20 miles from the front to the end of the fleet.”

At around 2pm Kellett said they were on the receiving end of beating into 13 knots nor’ easterlies. They were looking forward to the downwind ride home in up to 18 knots to the Rushcutters Bay finish line, which they expected to reach by 6pm. The wind was forecast to peter out by 8pm, leaving the smaller boats to deal with the reality of a slow night at sea.

By the 4pm sked, Rupert Henry’s Chinese Whisper was on her way home, sailing off Cape Three Points. The JV52 had mapped out a comfortable eight nautical mile lead over Jim Cooney’s Jutson 80 Brindabella, with a further two nautical miles to the TP52s Ichi Ban (Matt Allen), Celestial (Sam Haynes) along with Darryl Hodgkingson’s Cookson 50, Victoire and others.

Kellett also correctly predicted early on after looking at the weather forecast, “This will be a big boat race. The wind’s likely to die down around 8pm (Saturday evening), and that will keep the smaller boats out of the running.”

It was true in all categories, with Tasmanian yacht, Helsal 3, taking out PHS overall honours. The 29 metre Adams/Barrett design was skippered by co-owner Rob Fisher, with Ichi Ban and Chinese Whisper completing the top three.

Shane Kearns’ S&S34, Quikpoint Azzurro, brought the race to an end shortly after 6.30am this morning.