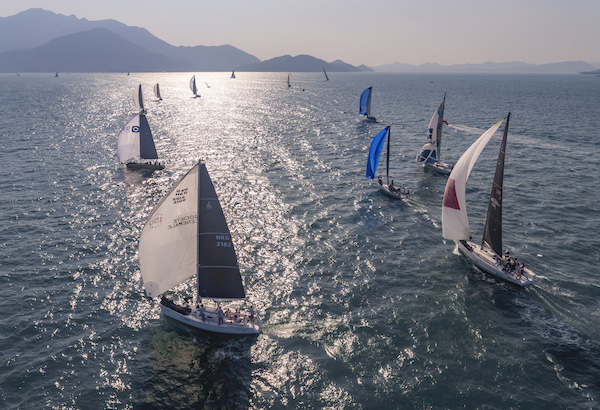 Day 3 was a stunner

Shenzhen, China: Cheche Team from Spain extended its lead in the Beneteau 40.7 one-design fleet on day three of the China Cup International Regatta, but it was Craig Monk’s young crew on ChinaOne.Ningbo who won the last race of the day, a huge feather in the cap for this up and coming team.

Monk, a New Zealand veteran of the Olympics and America’s Cup, wants to promote this bunch of 20-something Chinese sailors to the very top of the sport.

“The ultimate aim is to get more pro sailors into the international market, to make them a viable asset to another team, so we’re thinking pretty long term. It’s a big project but the guys are seeing success this week and that shows them what’s possible.”

In the morning the fleet was sent on a 19-mile island course that took the various divisions on a trapezoid tour of the craggy outcrops that line this part of the Shenzhen coastline.

Once again it was the Cheche crew who showed the 40.7 fleet a clean pair of heels, the Spanish boat, skippered by five-time J/80 world champion Rayco Tabares Alvarez. The Spaniards hold a six point lead over Jono Rankine’s local Forever 9 team in second place overall, with another big eight-point gap to Skip Lissiman’s Down Under Racing Team from Australia in third overall.

Laurie Jury’s XianLiao, the boat sailed by a young crew of semi-professionals from the Royal New Zealand Yacht Squadron (RNZYS), had a better day after their two disqualifications for starting over the line too soon on previous days. “We had a bad start in the long race, battled our way through and finished seventh.

“There weren’t many passing lanes, but we gained a bit by being higher in a couple of key places, and better crew work at the leeward drop gave us a couple more places back. We suffered a couple of bad tacks and boat handling errors otherwise it could have been a top three.

“Then we were second in the next race in the afternoon, so overall pretty good today. We have a young team and if everything went really well we would have a shot at winning. But not everything has gone well and we want to iron out those mistakes and finish on a good note. It's a massive learning curve and it’s easy to forget how hard these boats can be to sail well.”

Two women from the Seawolf crew gave their summary of the day. “We were doing really well in the long race until just before the finish when we headed for the wrong mark and that probably cost us three or four minutes, so we were fourth in that race,” said Tiffany Koo, ruing an error without which Seawolf might well be leading the division.

Echo Tsang looked forward to the rest of the regatta: “Three more races to go and we can go for it. We’re proud to represent Shenzhen and it would be amazing if we could win for the city.”

Dropping to third overall after a sensational outing the previous day is Whiskey Jack, the J/109 owned by Nick Southward, who thought he’d won both races today until coming ashore.

The race win in the island race proved to be a disqualification after Whiskey Jack was judged to have crossed the line just before the start. Southward was gutted but will keep on fighting.

“We've been here 10 times, and luckily we’ve won three times before. This year the boat has had a refit – new sails, a new rig, done some upgrades on most of the sailing gear such as new winches, which makes all the crew work a lot easier. The boat is going really well. We've only done four or five races in the new configuration but it seems to be going well so far.

“Up until today’s long race, the high point has been our starts which have been quite good, but today it seems a little too good. It’s a shame, it was a great race, strong pressure, nice breeze, some upwind, some reaching, some big seas, very enjoyable.

“We're the smallest boat in our fleet but we appear to be one of the fastest and we find ourselves sailing around other bigger, heavier boats, so there’s quite a lot of traffic management involved.”

Today’s start line error and subsequent disqualification makes Southward’s bid for a fourth China Cup victory a much harder task than it might have been. “If we're going to win, we need to get everything right, the tactics, the speed, the lane management, and the start, of course!”

Teams from 32 countries and regions are competing in racing divisions which include the Beneteau First 40.7, IRC Class, Bavaria One Design Class, J/80 Class, HKPN Class and Youth One Design Class. There are two days to go with the final races on Sunday 10 November.

*The China Cup International Regatta 2019 takes place over five days from 6 to 10 November in the waters of Shenzhen.