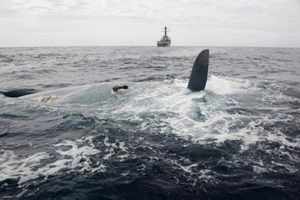 The overturned hull of the Cheeki Rafiki. Photo AP/US Navy.

The director of a yacht management company has been cleared of the manslaughter of four men who died when their vessel capsized in the Atlantic.

The crew of the Cheeki Rafiki died after the 40ft vessel lost its keel and capsized more than 700 miles off the coast of Nova Scotia in May 2014.

Douglas Innes, 43, was cleared of four counts of manslaughter by gross negligence following a retrial at Winchester Crown Court.

The crew's bodies were never found.

The four men on board – skipper Andrew Bridge, 22, from Farnham in Surrey, James Male, 22, from Romsey in Hampshire, Steve Warren, 52, from Bridgwater in Somerset and Paul Goslin, 56, from West Camel in Somerset – were travelling back to the UK when the vessel lost its keel.

Mr Innes shut his eyes and silently mouthed the words “thank you” to the jury when the first not guilty verdict was read out.

The director and his company Stormforce Coaching Limited will be sentenced on 11 May after being convicted at the first trial of failing to operate the yacht in a safe manner contrary to the Merchant Shipping Act.

The court had been told an “urgent email” had been sent by the crew warning Mr Innes their yacht – named after a character in the Lion King – was taking on water in bad weather.

He replied advising the sailors to make sure the life raft was ready and later phoned the UK Coastguard, but the prosecution had argued he had not shown any urgency.

The yacht was found overturned and empty on 17 May, two days after the email was sent, with its life raft still on board.

But Mr Innes told the court there had been regular inspections and no evidence of keel damage.

Read the full story at the BBC including the effects of two previous groundings on the structural integrity of the keel.