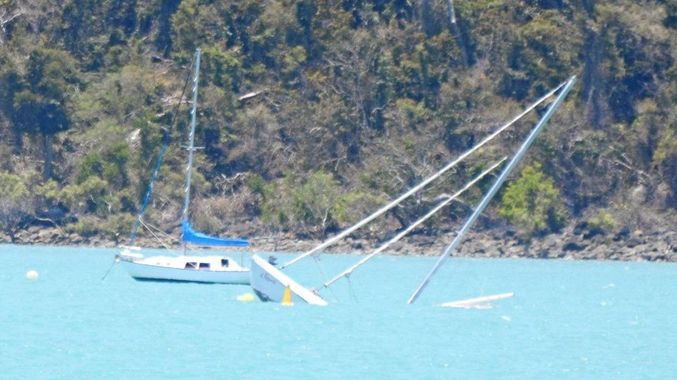 A catamaran sunk off Port of Airlie in the early hours of Monday morning. Claudia Alp/Whitsunday Times.

A catamaran which sank off the Port of Airlie has prompted calls from Whitsunday Water Police for boat owners to ensure their bilge pumps are in working order, according to the Whitsunday Times.

The 11.5m catamaran had been moored between Whitsunday Sailing Club and the Port of Airlie when it sank, and a passer-by reported the vessel to VMR at around 6am on Monday morning. They referred it to the Whitsunday Water Police.

Senior Constable Adrian Fitzpatrick went out to the catamaran and said the reason for sinking was unknown at this stage, but northerly winds were often a factor in vessels becoming submerged.

“This time of year, we're coming up to northerly winds which have vessels taking on more water,” he told The Times. “Sometimes when boats turn around, the bow faces into the wind which causes the vessel to pitch up and down collecting water under the bow. If the vessel has a low freeboard, it doesn't take much for them to scoop up water and fill the inside, especially if the bilge pumps don't kick in.”

“It's important that boat owners run a bilge system that has integrity and that works. If the bilge system is being operated by batteries, then they need to ensure those batteries are being sufficiently charged,” he said.