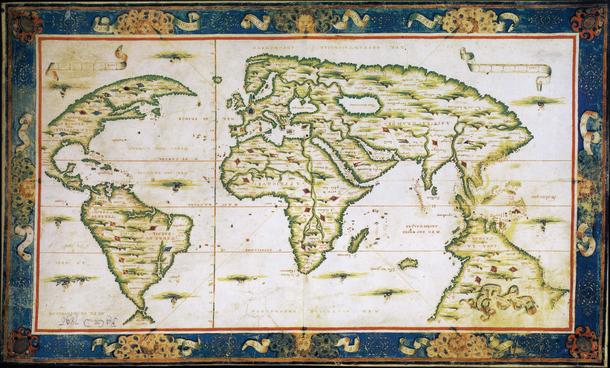 In 1956 a Turkish naval officer gave a copy of an early 16th century Ottoman navigational chart, drawn by Piri Reis, a captain in the Ottoman navy during the sultanate of Suleyman the Magnificent, to the U.S Hydrographic Office in Washington D.C.

That chart became known as The Piri Reis Map and drew worldwide attention because it appeared to show the coastline of Queen Maud Land in Antarctica, even though the map was drawn in 1513. More extraordinary still were the claims that the map showed that the islands and bays of the depicted coastline of Queen Maud Land are the same as they appear below the Antarctic ice sheet, as revealed by seismic echo-soundings taken in 1949.

The first reactions to these claims were: “OK, maybe someone sailed to Antarctica and surveyed part of the coastline before 1513, but how could they have mapped the coastline below the ice?”

The world’s press was quick to take up the story of the Piri Reis map, highlighting the enigma of the charting of what appeared to be Antarctica and creating a sudden widespread interest in medieval and classical cartography.

Two of the most off-beat theories put forward to explain how and why parts of Antarctica appeared on the chart, especially those below the ice, proposed that Piri Reis must have found and used documents compiled before Antarctica was covered by ice. Those ancient documents, it was claimed, could have been prepared either by extraterrestrials, or from one of Earth’s advanced lost civilisations; perhaps even a people whose descendants are still living deep under the Antarctic ice.

Recent scientific papers, however, refute the veracity of those 1949 seismic soundings in Queen Maud Land and go on to argue that the bedrock geology of Antarctica, as surveyed in 1972, showed that even by that date the topography beneath Queen Maud Land was largely unmapped and unknown. It was, therefore, impossible for any scientific comparison to have been made between it and what the Piri Reis may appears to show.

Other studies, including that published by the American Geophysical Union of Washington D.C., as ‘Geology and seismic stratigraphy of the Antarctic Margin’, in their Antarctic Research Series, volume 68 (1995) demonstrates that at no time in the last 14 million years was Antarctica ice-free enough for maps to be drawn showing either a partially or completely ice-free continent.

Yet the theories keep coming and debates continue about whether or not the Piri Reis map really shows an outline of Queen Maud Land.

Rand and Rose Flem-Ath, for instance, in their book ‘When the sky fell’, even put forward the theory that the entire crust of the earth moved around 12,000 years ago and carried temperate areas into polar regions, and, because of that crustal drift, Antarctica may be the lost continent of Atlantis.

Setting aside, however, speculation and all the modern debates about how, why and if it really is Antarctica that shows up on Piri Reis’ map, (and also, incidentally, on the only slightly later Oronteus Fineaus map of 1532), we can do no better than turn back the pages of history and see exactly what the cartographer himself had to say about his charts. In his most famous Atlas, the Kitabi Bahriye, and in his notations on the 1513 chart, Piri Reis tells us that he drew the maps from a composite of twenty older maps, of which eight of those were from the time of Alexander of the Two Horns: i.e. Alexander The Great.

Following those clues, Professor Charles Hapgood, who later wrote the book ‘Maps of the ancient sea kings’, examined the Piri Reis map of 1513 and stated that its centre is located at the intersection of the meridian of Alexandria: 30° east longitude and the tropic of Cancer; Greek geographers, from about 200BC onwards, often based their maps on the meridian of Alexandria. Its use as a centre on Piri Reis’ map appears to confirm his own statement that at least some of his source maps dated back to the Alexandrian period of Greek science.

From the 6th century BC onwards, Greek scholars, scientists and mathematicians, men such as Thales, Anaximander, Hecataeus and Herodotus, kept detailed records of their accumulating cosmographical and geographical knowledge. It is now impossible to say whether it was Pythagoras or Parmenides, in the 6th of 5th century BC, who was the first to come up with the idea of a spherical Earth; but, by the 4th century, this theory was generally accepted by all Greek scholars. Aristotle, in about 350BC, wrote six arguments to prove that the Earth was a sphere and, from then on, the concept of a spherical Earth was accepted by most ancient geographers and scientists.

Herodotus, an historian with a decidedly geographical bent, published his famous ‘History’ around 425BC. In it he gives accounts of the Phoenician circumnavigation of Africa in about 600BC, it was from those accounts that ‘the father of history’ concluded that the Southern Ocean extended from Spain to India. It was Heorodutus, too, who wrote that the Caspian is an inland sea and not a gulf of the northern ocean, as previously had been thought.

The Greeks also knew of the two 6th century BC Carthaginian voyages along the Atlantic coast; one along west Africa to Cape Palmas and the other along the Spanish and Gaulish coast to Brittany. Alexander’s great conquests took him to the Caspian Sea and northern India, near the end of those campaigns his admiral, Nearchus, sailed along the coast of Asia and the Persian Gulf. A little later, Pytheas of Massilia sailed into the Atlantic, rounded Spain and circumnavigated Britain; it was his precise observations and records of the sun’s declination in northern latitudes that sparked Eratosthenes’ research in mathematical geography.

Somewhere around 300BC Dicaearchus, a follower of Aristotle, drew a line of orientation on a world map, running east and west through Gibralter and Rhodes. Eratosthenes, Marinus of Tyre and Ptolemy later went on to develop the reference-line principle to create a system of parallels and meridians and methods of projecting them; it was Eratosthenes who takes us back to Alexandria in Egypt.

Eratosthenes, who lived from about 276BC to 194BC, was born in Cyrene and studied grammar in Alexandria and philosophy in Athens. He was a scholar and mathematician, eventually settling in Alexandria as librarian of the famous museum of the city that was the Greek administrative capital of Egypt and the focal point of Greek science. It was there, in Alexandria, that Eratosthenes succeeded in measuring Earth’s circumference.

Once he knew that the sun, at the summer solstice, was directly overhead at Seyen (modern Aswan), he measured the sun’s zenith distance at both Seyen and Alexandria. Without going into an explanation of the mathematics involved, this gave him Earth’s circumference. Assuming that he was was measuring distance in Greek stadia and that ten stadii equalled one mile, Eratosthenes was able to get his sums correct to within about 50 miles.

Hipparchus, who discovered the precession of the equinoxes and who was perhaps the greatest of all Greek astronomers, whose finest work was done between 146BC and 127BC, was the first to propose the idea of a mathematical grid system for measuring and mapping the globe. His system was made up of 360 degrees of latitude and longitude for a map based on astronomical observations, employing a method of determining longitudes by timing the observations of the eclipses.

This idea however, great though it was, could not be made to work to any degree of accuracy until modern times; simply because it depended upon very precise instruments to time the observations.

Ptolemy (Claudius Ptolemaeus), who lived from 100AD to 170AD, wrote his ‘Guide to geography’ in about 150AD.

In this book, comprising eight volumes, he made good use of the work of his predecessors.

To the ancient world Ptolemy seemed to have fulfilled Hipparchus’ dreams by constructing a map of the known world using a grid system based on 360 degress of latitude and longitude. But he had little cartographic data with which to work and made only half-hearted attempts to ascertain longitudes by the timing of eclipses. Instead he relied mainly upon dead reckoning from the reports of itinerant scholars.

Yet, even though Greek science probably reached its greatest heights in Alexandria in the 2nd century AD and went on to flourish at the Byzantine court and in the hands of the Arabs during the Middle Ages, its slow decline began after the fall of the Roman Empire, into the depths of what used to be the called The Dark Ages. Then, for six centuries until the dawning light and burgeoning spirit of the Renaissance threw off the cloying cloak of darkness, Europe wallowed in a period dominated by myth and superstition.

Much of what the ancients had learned from Aristotle and Hipparchus and their fellow scientists of the Greek world, including the reality of a spherical Earth, was either forgotten or denied; and the belief that the world was flat became, once more, the order of the day. To believe otherwise was heresy and map-makers had a hard time of it during the medieval period of Western Europe.

With the dawning of the Renaissance, however, Europe was fired with the desire and need for knowledge.

By then the spread of Islam into the West had brought with it and made available Latin translations, by Jewish scholars, of much of the classical Greek scientific, mathematical and philosophical knowledge. Translations of Ptolemy’s ‘Geography’ are known to have circulated in Italy around the year 1400.

In 1492, when Columbus sailed west to find Cathay, he knew that the world was a sphere. In 1474 Paolo Toscanello of Florence had sent him his world chart. Martin Berheim’s globe, published in 1492, showed the ocean separating Europe from Asia to have a width of 126° longitude. This was the knowledge that must have encouraged him to get on with the job.

And now we have come full circle back to Piri Reis because, apart from his references to his ancient map sources, the Turkish captain also wrote that in 1501 he had obtained other maps from a captured Spanish sailor. That sailor had told him he had been on Christopher Columbus’ three voyages to the New World, in exchange for his freedom, according to Reis, the sailor gave him a number of charts that Columbus had used in locating the islands of the Western Hemisphere.

So Piri Reis, in compiling his atlases and charts and like all the navigators since the 6th century BC, was indebted to the ancient Greek mathematicians and scholars who had formulated the concept of a spherical Earth laying the ground for the science of modern astronomy and the practical application of astro-navigational theory. ≈