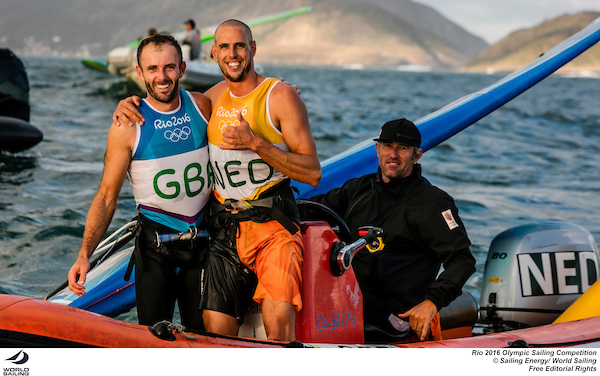 Pierre Le Coq (FRA) has won the bronze medal for France after a fierce battle in the Medal Race for the Men's Windsurfer (RS:X). Racing in 10-knot winds, the fleet of 10 windsurfers blasted up the race track in front of a crowd of spectators on Flamengo Beach, with the top of the course set in the shadow of Sugarloaf Mountain.

Dorian van Rijsselberghe (NED) took the lead on the last lap and won the race easily, the Dutchman cementing his status as the 2016 Olympic Champion. Nick Dempsey (GBR) crossed the line in fourth place, his silver already secure. But the battle for third was raging at the back of the fleet and Le Coq did enough to overtake the reigning World Champion Piotr Myszka (POL) in the second half of the race, to win the bronze medal.

Charline Picon (FRA) has won gold in the Women's Windsurfer (RS:X) after the most tense and exciting Medal Race ever seen in Olympic sailing.

Of the ten competitors in the double-points final, seven had a shot at gold. Picon started badly but moved through to second by the first mark. Meanwhile Peina Chen (CHN) had another gear downwind and shot up from sixth to second by the bottom of the first lap. China looked set to take the gold from France, but Picon held on in the light winds to the finish to secure the Olympic title, with Chen settling for silver. Lillian de Geus (NED) sailed an excellent Medal Race to cross the line in first place just in front of Picon, and had an anxious wait to see if she had done enough for bronze.

Stefaniya Elfutina (RUS) had a shocking start, being given a double penalty turn for infringing Bryony Shaw (GBR) at the start line. But the 19-year-old Russian rallied to seventh place and just edged out Lillian de Geus (NED) for the bronze.