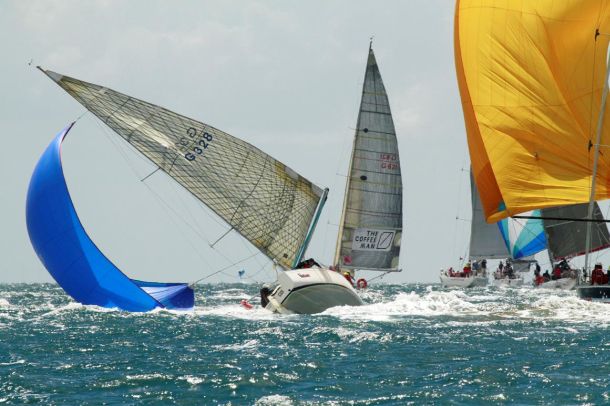 The cruising and multihull divisions provided the best action shots from the penultimate day of racing at the Festival of Sails presented by Rex Gorell Land Rover.

Gusty WSW winds of 30 plus knots and a choppy sea-state provided plenty of heart-stopping moments when some in the fleet started getting the ‘death wobbles’. Some of those wobbles were corrected, others ended badly.

A crew member found himself on the wrong side of Steve Copley’s Primo, falling overboard in bumpy seas in the early part of their passage race near the entrance to the Hopetoun channel. He was retrieved by a support vessel and put back aboard the Beneteau First 36.7. His crew was eager to continue racing in Cruiser/Racer division 2, and took off to catch up with the rest of the fleet as soon as the dripping wet sailor was back on deck.

Crew aboard the more balanced in the fleet looked on as the dominos fell during the more powerful gusts.

Winner of Club Marine Cruising Spinnaker division 2 and the series, Windsong of Mornington, thrived on the heavy breeze.

“It was good, strong winds which suits a boat such as ours. All the ducks were lined up perfectly for us,” Mornington Peninsula based skipper Jim Watson said. “It did become very windy and I was looking around at the fleet and wondering who was going to lose a rig. It was really good for us; it blew cobwebs out of the boat.”

Watson, who has contested four Festival of Sails, said a lot of fun was had on his Hunter 410 over the weekend. “There are no stories I can repeat,” he laughed. “I am 68, we’ve got a 79-year-old and a couple of 60s as crew. Tough and tenacious is how you would describe us. We’ve done lots of voyages together.”

John Raff’s 53 footer Kate rolled in second in today’s shortened passage race and was triumphant in the overall Cruising Spinnaker division 1 series, finishing with a tally of 17 points. It was a tight margin between Kate and Mark Bulcha’s Dufour 44 Balance, just two points the difference. A retired CEO of a pharmaceutical company, Raff was delighted his team of 12 combined forces over their three-day series to pull off the series win giving the five-time Festival entrant a special feeling given the boat is named after his daughter.

“It was a blinder coming down from Melbourne in the passage race and we did better today in heavy winds. Our top boat speed was 10.2 knots and the top wind we saw was 35 knots,” Raff said.

He and his crew watched the mayhem around them but finished without damage, all the more reason to celebrate on the eve of Australia Day. “We partied hard the first night, Friday, last night we lost energy and if we hold our position tonight that will be really good,” he said.

“It’s been quite an achievement. Even though there’s only three boats in our division, a win’s a win,” he said. “Credit to all my crew, it was an incredible effort. It was tough today; hard to stay safe and manage the sails.”

The forecast for Australia Day is light south-westerly winds and temperatures between up to 21 during the day.