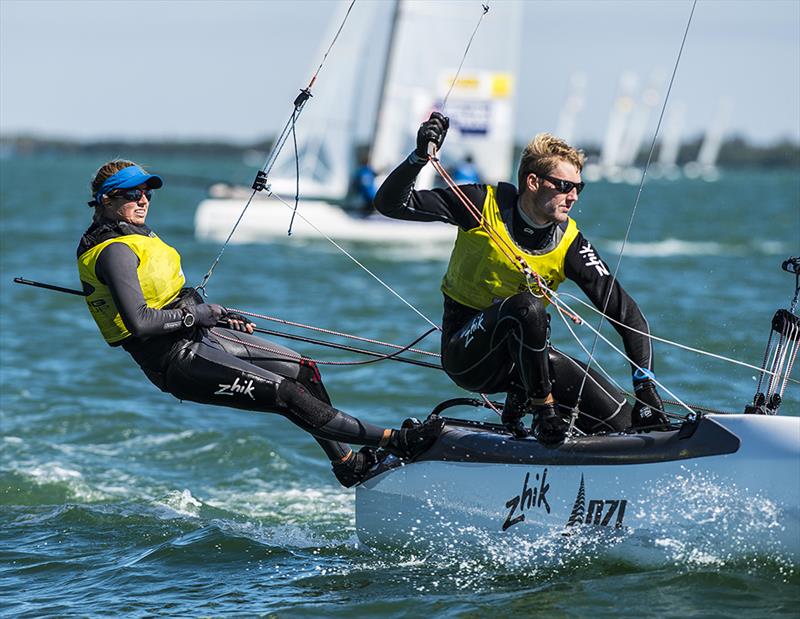 Gemma Jones and Jason Saunders prior to the split

Gemma Jones and Jason Saunders, the fourth place Nacra 17 team from Rio 2016, have split up just one year from the 2020 Games, each forming a new partnership, making it three new Nacra 17 crews forming with less than one year to go until the Tokyo Games – and all three could be contenders.

Jones and Saunders finished fourth in Rio, just outside the medals in an incredibly close finish in Rio 2016. Three years into the transition to foiling, the duo decided to split, citing lack of progress. With only a year until the next Games, the split comes very late.

With New Zealand already qualified as a nation for the 2020 Games, some of the short term pressure is abated, so the teams have 12 months to fight up to the international level and be selected from within the New Zealand squad.

Earlier this year, the New Zealand second team of Olivia Mackay and Micah Wilkinson ended their campaign. Despite their Red Bull Foiling Generation win in years past, the young duo couldn’t make their campaign for Tokyo work.

There seemed to be on a successful path, even being the team that technically qualified New Zealand for Tokyo, as they finished one position ahead of Jones and Saunders in Aarhus.

Jones has teamed up with Josh Porebski, the former 49er Worlds bronze medalist, who simultaneously ends his 49er campaign, despite quite a bit of success in 2019. With the return of Burling and Tuke (NZL) to the top of the 49er table, the opportunity to sail with Jones was an appealing one for Porebski.

Jason Saunders will continue to crew, but it will be for Olivia Mackay. They are the Kiwi pair with the most combined experience in the Nacra 17, and are sailing in the same position on the boat they have for years.

Featuring this week at the 2019 Test Event is the third team of Erica Dawson and Micah Wilkinson. Erica is a talented young sailor who formerly raced the 49erFX. She had been helming in past years, but now will be crewing for Micah, who himself switches from crewing for Olivia to helming.

These three teams each have outstanding pedigree, and despite the last minute nature of the changes it will be a fascinating experiment to see how quickly these teams can forge effective new partnerships.

The Nacra 17 is a boat that demands instinctive yet coordinated work between the skipper and crew, especially to keep the boat in balance on the downwind legs. However, it is also in a new configuration this quad so all teams are remain on a steep learning curve meaning the there is still opportunity to improve performance.

Whether these new teams can be ready to perform at the elite level by the Games and while hosting the 2019 Worlds in home waters will be required viewing for sailing fans.

All information on the Worlds: https://nacra17.org/events/2019-world-championship/

The Ready Steady Tokyo test event begins on Saturday, 17 August in Tokyo. Keep up with the action via: https://nacra17.org/events/2019-test-event