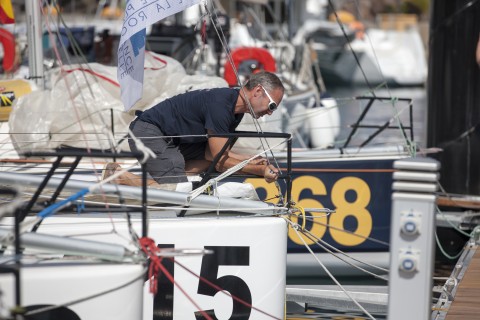 Midway between the Bahamas and the Azores, a tropical wave is taking shape as an active storm formation looms. For the time being, the associated minimum low pressure is not likely to prove dangerous, however the water temperature, which is exceptionally warm for this time of year, is conditioned by a high degree of instability. As such, ultimately, the formation of a tropical storm is a plausible hypothesis.

Grouped around the tables in the racers’ zone in the Vela Latina marina, the solo sailors were all talking about it. As they awaited a decision from Race Management, everyone was guessing the possible outcomes. Indeed, this morning, the routing clearly favoured a route a long way north of the direct course, but one that is potentially on a collision course with the tropical storm in question. Various scenarios were being mooted as to how likely it was that the tropical wave would transform into a deep depression, or even form into a hurricane. 20% probability is an acceptable hypothesis according to some, whilst other reckoned it was still too high.

Race Management has since made its decision. Wishing to avoid taking the risk of sending the fleet of 6.50m boats into winds in excess of 45 knots and wild seas, Denis Hugues, in agreement with the organiser, has decided to create a compulsory gate between the islands of Santo Antao, to the north and Sao Vicente to the south. In terms of distance, this equates to a detour of around 200 miles in relation to the direct route, or one long extra day to make Martinique. On the upside comes the guarantee that everyone will be sufficiently far away from the potential centre of the tropical low. In any case, the passage along the channel between the two islands may herald further measures to be imposed upon the Mini sailors should the weather situation deteriorate.

A change of strategy and tone

Of course, the passage via the Cape Verde islands changes the strategic tone somewhat. Some sailors were hoping for a wide open playing field, but now they will be forced into some more refined navigation, where the timing of the gybes is sure to count a lot more than any choices about major options. Indeed, the racers will have to really be on their game to find the right wind angles and be opportunistic on the trade wind route, which is seldom steady. Those who feared they would be playing trains will feel let down. That said, who would choose to hit the road in a car whose brakes had a 20% chance of failing?