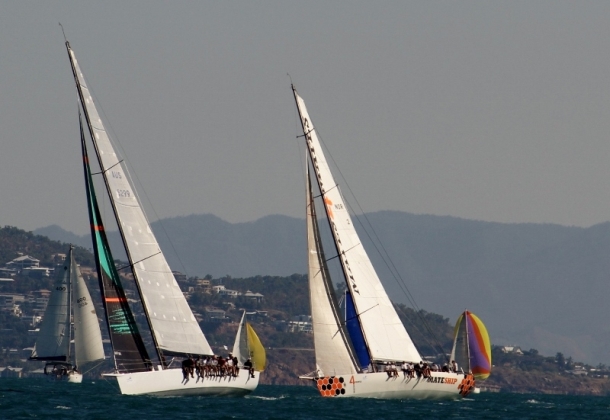 Spirit of Mateship and Victoire in their battle on the last day of the 2014 regatta. Photo Tracey Johnstone.

Winners of the Performance Division in last year’s SeaLink Magnetic Island Race Week, Mates4Mates’ Spirit of Mateship, want more of the same in 2015.

The team have confirmed they will return in 2015 for race week, which is being held from August 27 to September 1, to enjoy more of the great competition, hopefully more silverware and lots more of the dockside camaraderie.

Last year’s team was made up of a mix of wounded, ill and injured Australian Defence Force veterans, a handful of serving members and a mentoring group of experienced sailors. They raced the Volvo 60 confidently around various course configurations and in challenging conditions keeping Sydney Hobart Race winner, Darryl Hodgkinson’s Victoire at bay and out of the top place overall.

Skipper Peter Jones said it was not only the racing and consequent result that made a big difference to the positive experience for his visiting sailors. “They loved being where all the boats are on the marina. The atmosphere after racing was really good for the ADF guys.

“They research about sailing before they come with us and they see names of high-profile people so to be able to approach them so easily and talk to them it’s really great for them.”

The Spirit of Mateship program for 2015 will see the team compete in the Brisbane to Noumea Race, Brisbane to Keppel and then the SeaLink Magnetic Island Race Week before they head back south in time for the Sydney Hobart Race.

In between those major events, the Spirit of Mateship Boat Manager Peter Huybers reported the team will be conducting Try Sailing days in Sydney, Gold Coast and Townsville.

The SeaLink Magnetic Island Race Week will again see a mix of about eight to 10 experienced sailors mentoring a group of about seven to eight visiting defence force personnel.  “We are working towards getting a lot of the visiting guys to come out of the Townsville barracks,” Huybers said.

Applications for positions on the boat are being accepted by Mates 4 Mates through their website www.mates4mates.org or by calling their office on 1 300 4 62837.

“The great thing about Magnetic Island is it’s not like Sydney Hobart Race which you build up to it, you do the race, get down there, have a night and then you go home. With Magnetic Island the guys can interact over a period of a week with other crews from other boats and talk about their experiences.

“The racing is a different kind. Going to Hobart you might be on the nose the whole race and may get a kite up. But with Maggi, it’s busy as you get different courses each day with all the sails being used,” Huybers added.

The SeaLink Magnetic Island Race Week Notice of Race has been published and online entry is open at www.magneticislandraceweek.com.au.