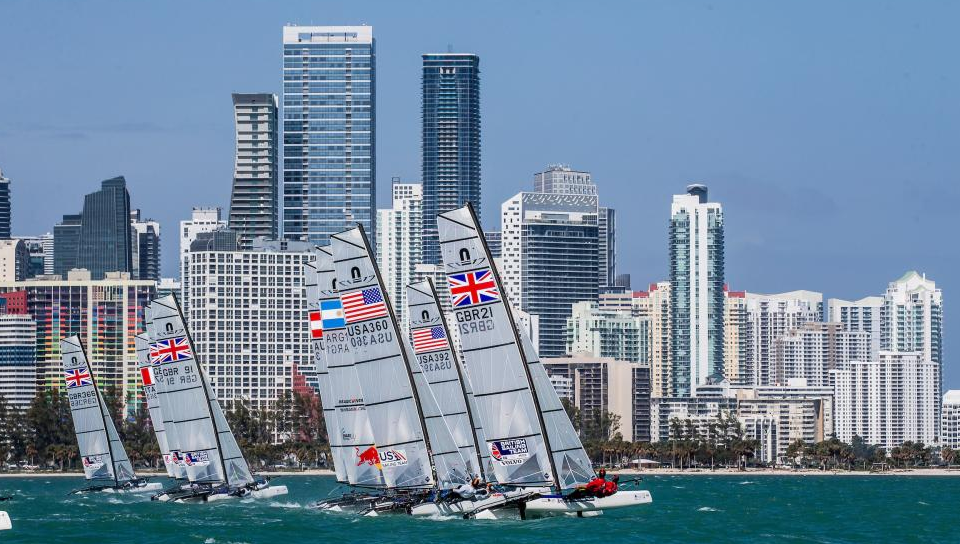 The 2019 World Cup Series Miami, held out of Coconut Grove from 29 to 3 February, will see nine defending champions return to Biscayne Bay determined to defend their titles.

2019 marks the 30th edition of an Olympic sailing regatta in Miami and, with 650 sailors from 60 nations registered to race across ten events, it’s expected to be another strong year of competition.

Of the 2018 Miami gold medallists, Giles Scott (GBR) is the only athlete not competing this year. Across the ten events, there are 34 Olympic medallists racing alongside numerous World and World Cup podium finishers, and the best sailors will be vying for a World Cup medal as the race to Tokyo 2020 continues.

Australia’s Jason Waterhouse and Lisa Darmanin will come into Miami as favourites in the Nacra 17 after securing gold at the first round of the Hempel World Cup Series in Enoshima, Japan last September.

Waterhouse and Darmanin overthrew Ruggero Tita and Caterina Banti (ITA) in the Medal Race to claim a hard-earned title – but exactly one year ago, the competition was slightly less stressful for the Aussies. Racing on the Biscayne Bay waters in 2018, Waterhouse and Darmanin controlled the fleet all week long and simply needed to finish the Medal Race to secure gold. They did that with ease and are back to defend their title.

Santiago Lange and Cecilia Carranza Saroli (ARG) and Thomas Zajac and Barbara Matz (AUT) joined them on the podium in 2018 and also return this year.

In 2018, Louis Giard and Helene Noesmoen made it a double French gold in the Men’s and Women’s RS:X windsurfer.

Both will star in their respective fleets again in 2019, but bigger fleets with strength in depth will ensure it won’t be easy for them to retain their title.

Joining Noesmoen in the 44 strong Women’s RS:X fleet will be her compatriot and Rio 2016 Olympic gold medallist, Charline Picon, who has been competing again for less than a year after becoming a mother post Rio 2016.

Although Picon spent considerable time away from the RS:X, it was almost as if she never left, as she finished second at the Hempel Sailing World Championships and seventh on Olympic waters at the Enoshima round of the Hempel World Cup Series.

After a sustained period of training and preparation, Picon will have her eyes set on overthrowing Noesmoen in Miami.

In the Men’s RS:X, a similar French battle is expected to unfold; one that has been ongoing almost immediately after Rio 2016. Giard has locked horns with compatriot Pierre Le Coq in the World Cup Series over recent years, the pair continuously sharing podiums with minimal separation. Thomas Goyard (FRA) has also been in the hunt as the fight between the French is set to resume in Miami.

The Men’s RS:X fleet will welcome 61 racers, many of whom know what it takes to stake a claim for gold.

In the 49erFX class, Germany’s Victoria Jurczok and Anika Lorenz won their first World Cup title in Miami last year and, following a mixed bag of results after that, they’ll be hoping to find that winning form once again.

Elsewhere, Rio 2016 gold medallists and 2013 and 2017 World Cup Miami winners Martine Grael and Kahena Kunze (BRA) are fully back into the Tokyo 2020 campaign trail. The pair stepped away from the 49erFX after Rio as Grael focused on a Volvo Ocean Race campaign, but they’re 100% focused on the next Olympic Games.

They showcased their skillset at the opening round of the 2019 Hempel World Cup Series in Enoshima, Japan, claiming gold, and recently won the Miami Skiff Mid-Winter Regatta, so they will be firm favourites this week.

Their long-term training partners and on-water rivals Alex Maloney and Molly Meech (NZL) will also be in the hunt, as will Charlotte Dobson and Saskia Tidey (GBR) and Tanja Frank and Lorena Abicht (AUT).

The final returning champions from 2018 are Dylan Fletcher-Scott and Stu Bithell (GBR). They weathered a late charge from Diego Botin and Iago Lopez Marra (ESP) last year to take gold by a single point. With the Spaniards returning as well, a familiar rivalry will resume.

A fleet of 43 will sail in the 49er, and Croatian brothers Sime and Mihovil Fantela will also be in the hunt after they emerged as serious contenders following victory at the Hempel Sailing World Championships in Aarhus last year.

Racing is scheduled to commence on Tuesday 29 January and run through to Sunday 3 February.