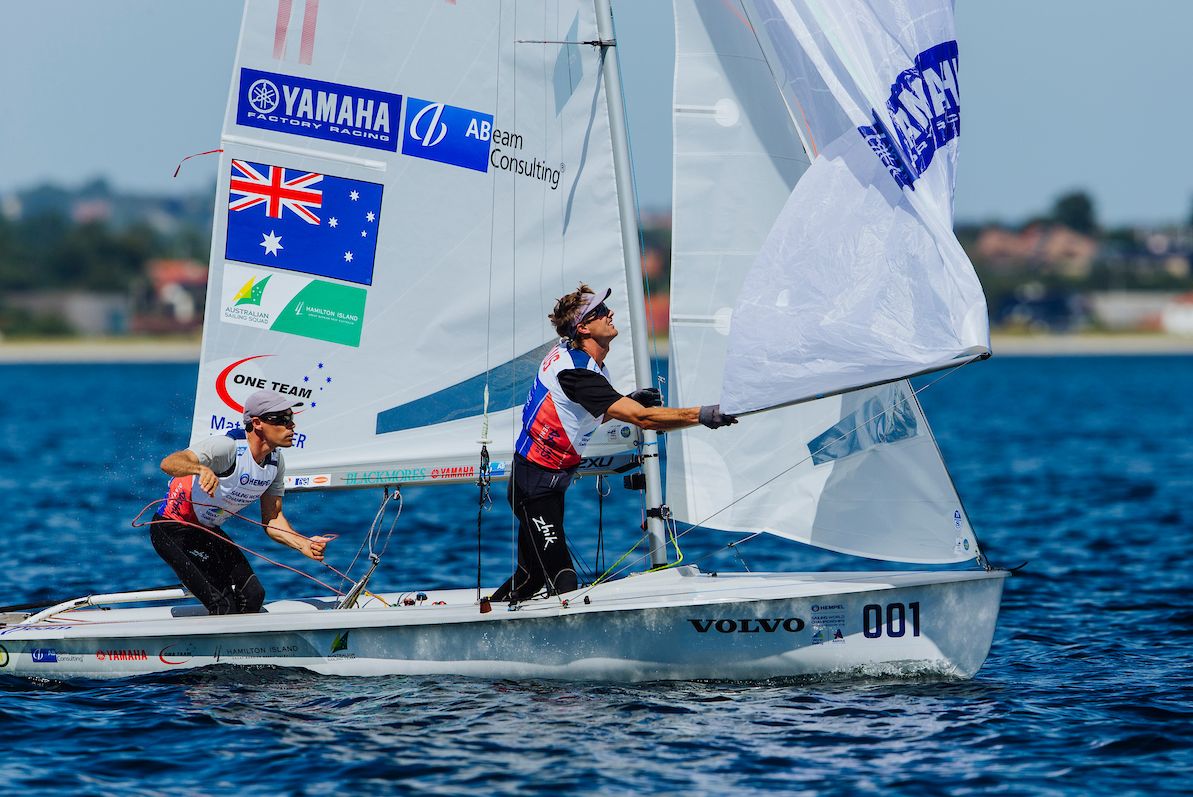 Mat Belcher and Will Ryan on the first day at the AArhus Worlds. Photo Sailing Energy/World Sailing.

Out of a mixture of modesty and misinterpretation sportsman often talk up luck. Sailors are no different, but on the opening day to Hempel Sailing World Championships Aarhus 2018, when the words “shifty”, “tricky” and “lucky” were thrown about the boat park faster than in a Vegas casino, the cream rose to the top.

Only one race was possible for each of the two men’s 470 fleets (the 130 sailors in 65 boats were split into two fleets), but the first was won comfortably in the end by the Swedish 2018 European Champions, Anton Dahlberg and Frederik Bergström and the second by the Greek bronze medallists in the 2016 Rio Olympics, Panagiotis Mantis and Pavlos Kagialis.

Behind the Swedes, the Australia’s perennial favourites, Mat Belcher and Will Ryan, came back from 14th to finish strongly in third. The silver medallists in Rio and winners of the last two World Championships, kept patient and chipped away on each beat and run.

The women’s 470 (94 contenders in 47 boats and one fleet) started to follow the same pattern as racing continued late with Switzerland’s Linda Fahrni and Maja Siegenthaler, winners of the Test Event in Aarhus this time last year, dominated from start to finish. But it was the French who had the best day. Camille Lecointre – the Rio bronze medallist – and her new crew, Aloise Retornaz, were a clear second in the first race and managed sixth in second race, where the Swiss finished thirteenth.

With so many changes in the women’s fleet crews in the last couple of years the results were not such a surprise. Britain’s gold medallist in Rio, Hannah Mills and her new crew, Eilidh McIntyre (GBR), had a tougher day, in this mammoth field, finishing 9th and 14th to lie 8th overall.

In the Finn, both fleets (90 sailors from 41 countries split into two fleets of 45) managed one race and the first was won by the 25-year-old Brazilian favourite, Jorge Zarif, who was fourth in Rio but has dominated 2018.

After waiting four hours for wind, Zarif moved through the fleet in a beautiful south-easterly of 8-10 knots. Zarif is the son of the late Jorge Zarif Neto, who finished eighth in the 1984 Los Angeles Olympics

Brazil’s most decorated sailors, Torben Grael and Robert Scheidt, here to support another strong Brazilian team, were in the boat park to offer him encouragement.

In the second fleet, Croatia’s Josip Olujic, was more of an outside winner, leading from start to finish. Max Salminen, who won gold in the Star class at the London 2012 Olympics, the Finn class world championship last year and is ranked second in the world behind Zarif in 2018, stormed back to finish third.

This is likely to be a week of high scores. You can’t win a regatta on the first day, but you can lose one, especially with only one discard for the week. New names always emerge at World Championships, but the best keep showing that they find a way whatever the conditions.

Mat Belcher – AUS – Men’s 470
“As a sailor trying to race in those conditions, you’ve got to be a bit lucky and you also have got to just try and be patient. We had a great start, tried to consolidate and then found ourselves at the back in 15th or 16th at the top mark. But I guess the strength of our partnership is that we just keep chipping away. We’re stoked to finish third. It’s an awesome, challenging venue and I guess that’s part of being at the Worlds right, it’s supposed to be a test.

It’s a sign of experience, Luke (Patience) and the Swedish guys, Jordi (Xammar Hernandez) was second in the World Cup final. All the top guys were up there and I think that’s probably going to be a theme this week, you’ll get some guys putting into some good shifts and getting up there, but they’ve got to keep putting it together and that’s where just a bit more time in the boat helps.”

Pavlos Kagialis – GRE – Men’s 470
“You can’t always (find a way). But it seems like the top guys are very focused on the big events and so that’s probably why the the good boats are in the top places. If you focus all the year on this event, for sure you control the result more. Everyone can win a race, but only a few can win a regatta. You must be very stable in all the conditions for one week, this is the difference between our sport and the others.”

Linda Fahrni – SUI – Women’s 470
The fleet is huge, and any mistake can put you at the back.

We took the wrong side on the first upwind and we lost a lot on the last 200 metres of the first upwind. Then we had to catch up and we managed to finish 13th but even that was really difficult. We like these waters, it’s complicated and we like shifty conditions.

Camille Lecointre – FRA – Women’s 470
Compared to the men’s fleet, we had a good day – the wind was good, and we managed to race well without any issues, weather wise.

There fleet is huge but at one moment we were clear of the whole fleet, which felt great.

Definitely our good starts and consistent speed (made us happiest). We have been sailing with each other for six months and this is our first Worlds. If we sail like how we did today, throughout the competition then we stand a good chance of winning a medal for sure.

Frederik Bergström – SWE – Men’s 470
It was a tricky start, we didn’t manage to catch the best lane. We just did our best and all that training kicked in. We managed to make some calls which we made some gains on. We did make a couple of mistakes, but it was about minimising them as fast as we could. There were a lot of opportunities in the race too, some sailors above us made some mistakes.

We were expecting the weather to be challenging but not as hard as it was today. We’re expecting a touch championship for sure.

Martin Wrigley – GBR – Men’s 470
“That was really trick, it was possibly the hardest day at any event I’ve ever had. Our plan was to keep our fingers crossed and hope for the best, see what came to us and luckily it played us a good hand.

(The top guys) might look bad at one point, but ultimately they always keep chipping away and take two boats here and there.

James Taylor – GBR – Men’s 470
The first beat was nerve-wracking and on the second beat the wind disappeared and it was basically a lottery and you had no idea where the wind was coming from. It was a case of not panicking.