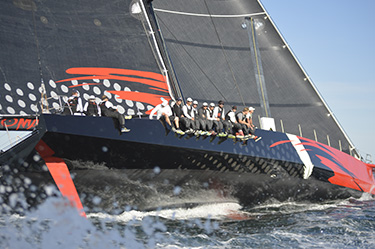 The 100ft Comanche speeding at 25knots. Race officials predict that she could cross the St David's Lighthouse finish line off Bermuda at around 3:AM EDT. The Ken Read skippered racer has until 9:19 EDT to beat the 39hr 39min 18 sec record for the race set by RAMBLER in 2012. Photo Barry Pickthall/PPL.

Less than 24 hours into the race, Comanche is already through the Gulf Steam and pressing to break Rambler’s elapsed time record from 2012. “We’re in Champagne conditions, making 20-25 knots,” said skipper Kenny Read. At press time 7:00PM in Bermuda, Comanche was 213 miles from the St. David’s Lighthouse finish in Bermuda doing 20kts. At that pace she would cross the finish line as early as 3:00AM, some 7hrs ahead of the record.

The existing (and probably soon to be old) course record is an average speed of 16 knots and an elapsed time of 39 hr. 39 min. 18 sec. That record was set four years ago, in the last “reaching race,” by George David’s 90-foot Rambler, which clipped a spectacular 14 hours off the previous best time set during the previous “reaching race,” in 2002, by Roy Disney’s Pyewacket.  “These were perfect conditions,” David told Colin Thompson of Bermuda's Royal Gazette after collecting the bottle of champagne that’s the traditional reward for the line honors winner.

Rambler not only slashed the race record. She easily beat the next two boats by more than 90 minutes—the Maxi 72s Bella Mente (owned by Hap Fauth) and Shockwave (George Sakellaris), with Bella Mente winning by just 2 minutes on elapsed time. Shockwave turned the tables on her in 2014 by a margin almost as small—7 minutes.

With the Maxis opting not to race this year, when Comanche finishes on Sunday, whoever is observing will have the right to quote the sailor who told Queen Victoria about the yacht America in 1851:  “Madam, there is no second.”

The first night of the 50th Bermuda Race found the 130 boats in the fleet reaching comfortably in a light westerly wind, most tightly bunched well behind the leader, Comanche. Jim and Kristy Clark’s 100-foot all-out racing sloop covered the first 181 miles in 13 hours. Some 80 miles behind her was the Hubbard family’s Siren, and then the pack. Surrounding them all was concern about upcoming weather.

The New York Yacht Club Race Committee, which started the race in 16 classes over three hours on Friday afternoon, reported a total of 133 starters in flat water and a 10-knot breeze gradually clocking from South to Southwest. Three boats later withdrew — Challenger, Momentum, and Soulmates — leaving 130 in the race on Saturday morning.  Most are directly in Comanche’s wake, but a few have sailed off to the west, undoubtedly with a strategy of making the best of Sunday’s changing weather that has been anticipated all week in forecasts.

The boats and their crews are the story, and also the weather and everybody’s profound concerns about it.  Friday night and Saturday morning’s weather and sailing have been ideal in every way except high boat speeds and excitement. The wind has been light but not ahead, and so the boats made good speed reaching in smooth water.

Jonathan Green, skipper of the Double-Handed Division boat Jeroboam (defending her 2014 race win), reported  at 8PM Friday as follows: “We had a good start off the line and beat down to Point Judith before tacking. We were then lifted to the rhumb line and the lift continued so we are now reaching with the jib barber-hauled to the rail and heading straight for Bermuda. Wind may abate this evening but we shall see. All is well on board.”

Inisharon, a 44-footer in the Cruiser Division, had this report around midnight: “Crew is well into the watch schedule and so far beautiful night of idyllic sailing. Wind has come off some, but we are making good progress and trying to get every bit of speed out of the boat. Easy sailing so trying to make sure everyone’s getting the sleep they need and charging their batteries in anticipation of a bumpy crossing of the Gulf Stream. 152nm to the entry point of the Gulf Stream, so roughly 30 hours before we get there.”

Forecasts for the Stream
That target – the Gulf Stream entry point – is extremely significant. According to the 6:40 AM Saturday weather forecast from Commanders Weather, once the boats are south of latitude 40 degrees, a front should cause the wind to increase and shift into the north and northeast, and then strengthen on Saturday night and Sunday as the fleet nears the Gulf Stream.  This segment of the 635-mile Bermuda Race course always attracts attention because the Stream’s hot water can breed squally weather and steep waves.

This race has seen disagreement among forecasters.  Some forecasts earlier in the week before the start called for strong northerly gales and an extremely rough sea as the wind clashes with the Stream’s northerly flow. These gloomy forecasts reportedly influenced 53 crews who had entered the race (including all entries in the Gibbs Hill Lighthouse Division) to either decline to start or later, to drop out.

According to the new Saturday morning forecast however, there appears to be a consensus that conditions will be more moderate. There will be wind, but peaking around 35 knots (with higher gusts in squalls). And there will be rough water, but more in line with what experienced Bermuda Race sailors call “typical Gulf Stream conditions” — in other words, uncomfortable but not dangerous to good boats and capable sailors. Time will tell if the conditions will, in fact, be typically bouncy or atypically much worse.

The boats can be followed on Race Tracking, available on the race website.

NOTE: A four-hour delay is imposed on reports to prevent competitors from taking advantage of learning about other boats’ positions and performance.