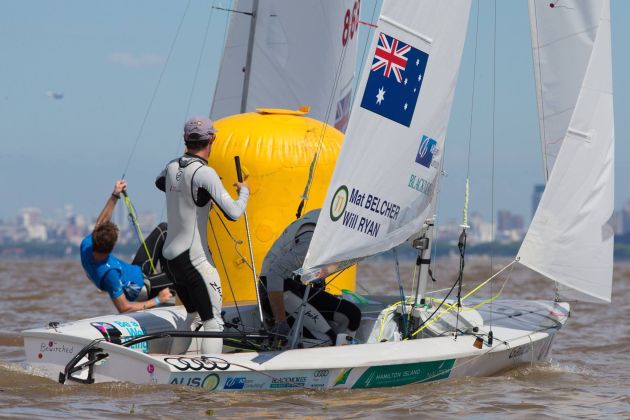 The three-time World Champions finished race one in fourth, but after a U flag at the start of the race the result did not count. A top-twenty finish in race two sees them sit at the back of the 42-boats fleet in 33rd after day one and with five more days to go.

“It was a tough day for us. We were sent out for a 12 pm start but there wasn’t any wind. We eventually got a start in at 2.20 pm in a light but building breeze. The conditions were nice with over a knot of current, which made for some interesting racing. We were racing well but got caught up in a few back markers at the start of race one and with one knot of current we literally got dragged over on the U flag start – a little bit silly in the first race of the Worlds but a good lesson. We finished 4th in the race but doesn’t count.”

“The second race again was really difficult to get off the line. We have 44 boats in the fleet and there isn’t much room on the course. I’m not sure what position we got but around the early 20’s. We will focus more tomorrow to get off the line and try and find some clean lanes,” Mat Belcher said about the events of the day.

“This was not the start we were looking for but we have the experience to get ourselves back on track. We have quite the hole to get out of now but we’re looking forward to the challenge,” he added.

A total of three Australian Sailing men's 470 crews are competing in Buenos Aires with Australian Sailing Squad’s Patrick and Alexander Conway (NSW) and Victorians Tom Klemens and Tim Hannah finishing the first day in the Men’s 470 fleet in 17th and 36th respectively.

In the women’s fleet Australian Sailing Team’s Carrie Smith (WA) and Jaime Ryan (QLD) started the event with a 28th and finished day one with an eighth to be ranked 17th. New combination of Sasha Ryan (QLD) and Ella Clark (WA) had a UFD and 19th and sit in 31st in the 39-boats fleet.

In other World title events, Australian Sailing Squad’s Joanna Sterling (QLD) finished day one at the 2016 RS:X Men’s and Women’s World Championships in 32nd after posting a fifth and 29th.

Australian Sailing at the 470 World Championships

The 470 World Championships in Buenos Aires are the season highlight in the lead up to the 2016 Rio Olympic Games.

They have been a winning combination ever since getting together post the London 2012 Games and have continuously finished on the podium at every sailing regatta they have competed in.

While Mat Belcher and Will Ryan have already been selected to represent Australia in the Rio 2016 Olympic Games in the men’s 470 class, the women’s crew is yet to be selected. Australian Sailing Team’s Carrie Smith (WA) and Jaime Ryan (QLD) are vying for the spot and their selection over the next few months.

Racing at the 2016 470 World Championships runs from Monday, 22 February through to Saturday, 27 February with the world’s best Olympic 470 class sailors racing out of Club Nautico in San Isidro over six days. The format for the 470 World Championship is 11 fleet races, followed by a top-ten double-points medal race on Saturday, 27 February for the top ten teams advancing from the fleet race series.

Qualifying and Final series will be followed by Saturday’s top-ten Medal Races and prize giving.