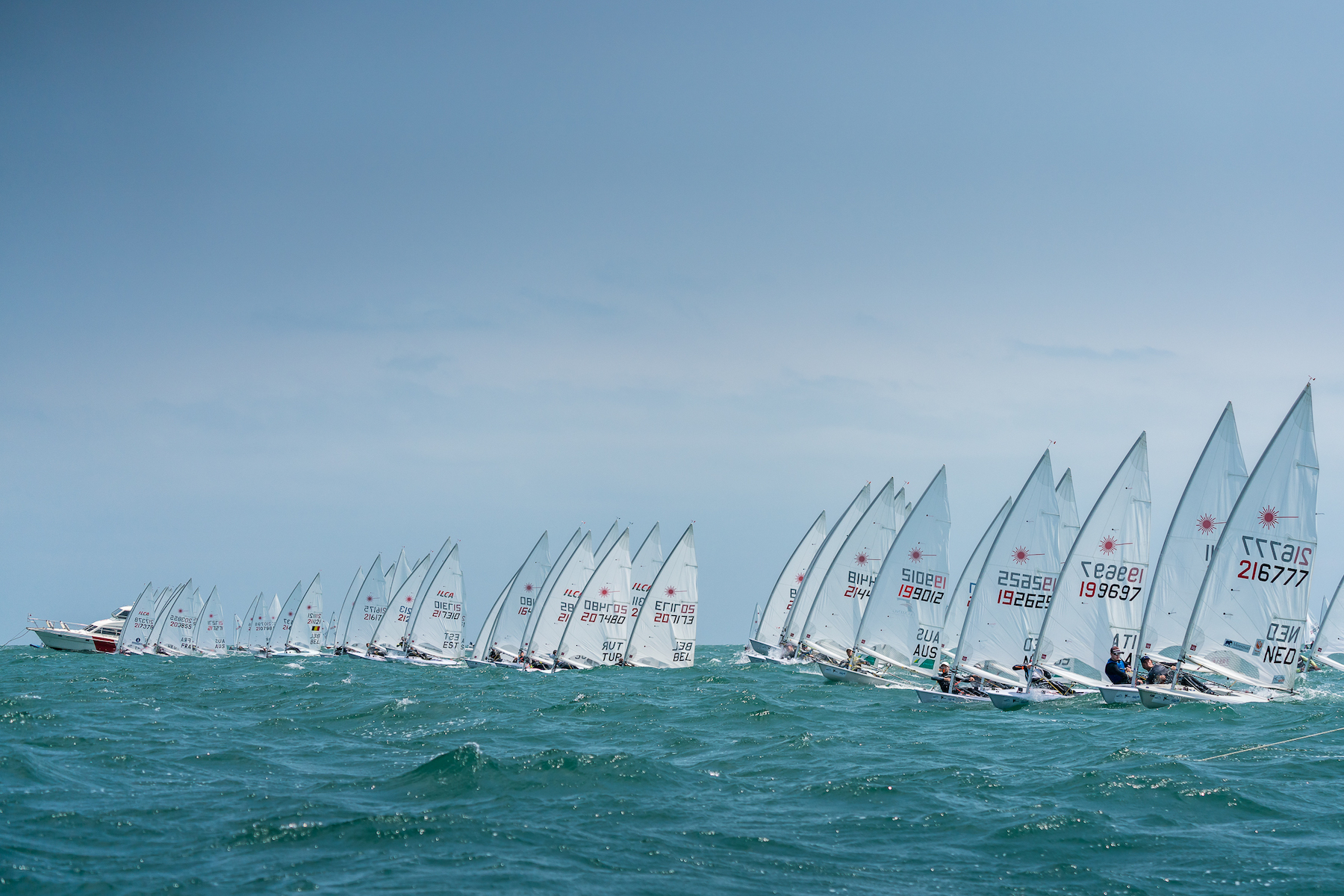 With wind limits on the edge, conditions on day one of Sail Melbourne International 2020 provided many competitors with a wild, windy and challenging day on Port Phillip Bay.

Racing started out in around 20-22 knots, but with wind gusting into the high twenties as the afternoon progressed, racing was cut short after several classes reached their wind limits. All classes, but the Tasar, managed to get one race in, with only the kiteboarders as well as the windsurfers completing their race schedule.

“It’s funny, I’ve spent a lot of time here over the past 10 years and I’ve never seen a day like this racing,” Rio 2016 Finn Olympian Jake Lilley said. But that’s Melbourne for you.

“A super windy easterly, up and down, with big waves standing up and fun for everyone,” he said, describing conditions to the tee. “It was a case of getting out there and trying not to make too many mistakes,” about the conditions after winning the Finn fleet race.

Lilley also contested the 2019 Finn Gold Cup in Melbourne in December and finished fifth overall after winning the top-ten Medal Race on the final day, and also secured Australia the Finn quota spot for the Tokyo 2020 Olympic Games – the last time the Finn will be included as an Olympic class.

With a small group of international Finn sailors staying on to make the most of Australian summer, the ten-boat fleet at Sail Melbourne is expecting to enjoy some exciting racing over the next five days.

“It is great to have some international guys here; every race is like a Medal Race and those that aren’t here are missing out,” Lilley remarked.

“The international guys here and my training partner Lachie (Gilham) are really high-calibre, so it is just great practice,” he said. “We’ll practice scenarios to hold us in good stead come the middle of next year.”

Sail Melbourne International continues the 2020 Melbourne Summer of Sailing event series. With just under 200 days until the Tokyo 2020 Olympics, the event has attracted over 300 entries from 25 countries, with many using the event as a warm-up for their class world championships, including the Laser, Laser Radial and RS:X world championships in February.

For some of the internationals, who have only just arrived, the conditions were a bit a shock to the system, but others quite enjoyed and thrived in them.

Korea’s Tokyo 2020 RS:X representative, Wonwoo Cho, loved the strong winds and finished second in all of the three races. He leads the RS:X results board after day one.

“This is my first time in Melbourne,” Cho said, and it is beautiful weather and a good place for windsurfing. I arrived 10 days ago and will be going back to Korea after this competition. I will return for the World Championships in Sorrento. I am in training for Tokyo and many good sailors come here for training, so it’s great to be here.”

Great Britain’s Tom Squires is sitting in second, and also enjoyed the conditions: “It was pretty rough; the breeze kept picking up and it was really tight on the windsurfing course,” he said..

“We tucked right up next the beach and the wind was shifting 30 to 40 degrees. We have been racing with the girls here so the starts have been crazy, quite a lot of people, a wild one, sick,” Squires laughed.

The Laser Standard and Laser Radial events have also attracted a world-class field and the largest number of entries with Sail Melbourne a good opportunity to test Port Phillip ahead of their world championships at Sandringham Yacht Club in February.

Only one race was held, with Rio Olympic champion, Tom Burton, making the most of the strong wind to finish second behind three-time Olympian Jean-Baptist Bernaz.

“It was a pretty big day with massive waves and big winds. We only had a little bit of waiting around and it was pretty obvious that everyone was close to the limit with one race today, so we are in for a big three-race day tomorrow,” Burton said.

The Laser Radial was won by Rio Olympic champion Marit Bouwmeester from the Netherlands, with Western Australian, Michael Compton, following in second and top male competitor in the fleet.

Sail Melbourne includes several sub-events, with the Laser Oceania, Australian Kite Foiling and Australian Para-Sailing Championships’ as well as the Australian Championships in the International 505 Class all to be decided over the five-day event.

Racing continues on Saturday with start times scheduled for 2pm, with three races scheduled across all fleets.